Home » By The Numbers » Bradley Steven’s Art Exhibit: A New Look on the Past in order to Move Forward 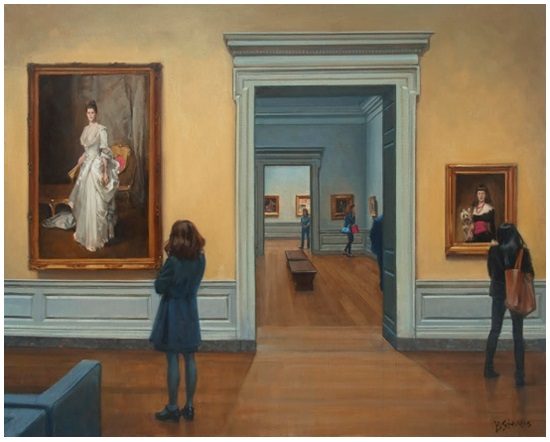 Bradley Steven’s Art Exhibit: A New Look on the Past in order to Move Forward

“The government is shut down; all the museums are closed; get your art fix here,” said artist Bradley Stevens, standing in front of his exhibit Museum Studies II: Honoring the Female Perspective in Zenith Gallery last week. The exhibit is not big. It consists of about ten pieces, some of which are no longer displayed because they have been sold. Even more, the ones that are left are crammed in an office-like room in the basement of a woman’s house (functioning doubly as a gallery) at the very tip of Washington, DC. The gallery’s presentation could not be more haphazard, yet the artwork shines even so. It speaks to the strength of Stevens’ art that even in a state that seems to undermine his work, the paintings are still thought-provoking, impressive, and simply pleasant to look at.

True to his word, Stevens’ oil on linen paintings transport viewers to museums, featuring female museumgoers looking at famous pieces of art. As the gallery owner Margery Goldberg remarked, “Even the artists who painted these paintings did not paint them miniaturized and sideways.”

Stevens, a former Georgetown University art professor, went to George Washington University and fell in love with the National Gallery of Art. He spent five years in a copy program there, where he recreated masterpieces and by doing so learned how the original artists painted. As his master’s thesis at GW, Stevens painted museum interiors, and both his experience in copying and in painting museums is reflected in his newest collection. His notable career so far has included commissions to recreate masterpieces for the Monticello Estate, the French US embassy, the White House, the National Gallery of Art, the Art Institute of Chicago, and the list goes on. He’s also been commissioned to create original works, and in his freetime paints uncommissioned art, such as Museum Studies.

Stevens’ first Museum Studies collection did not emphasize gender and politics, but was rather a survey and celebration of American art history. This Museum Studies, however, is inspired by Stevens’ disappointment over the 2016 presidential elections and current US politics. He especially cites the Women’s March of January 2018, the #MeToo Movement, the school shooting protests, and the rising power of women in US politics as influences for this new focus. Although maybe not apparent after a quick survey, there is a strong political current in his works. “Women will bring us out of the darkness,” Stevens said, referring to women’s influence on politics. One of his largest paintings on display is called “Towards the Light,” and features a woman and a young girl walking in the National Portrait Gallery away from the viewer and towards a source of light from an unseen hallway. In the painting, the museum interior dwarfs the two figures, but the light focuses immediately on them. The woman and girl seem to be leaving behind the past, represented by the darkened museum, and entering the outside world, the brighter future. The female perspective in the exhibit’s title is no longer referential merely to women viewing art, but also to bringing forth new perspectives into the American political sphere.

Although “Towards the Light” does not include women specifically looking at art, many of the other works in the collection do. The works are a composite of paintings and their viewers, often modelled of people who are close to the artist like his wife and his friends. In “You’re Not Alone,” Stevens’ wife stands by herself in a museum, looking at a portrait of a man (painted by a woman, Cecilia Beaux). Even though there is no one else besides her in the room, she is not alone because to Stevens, paintings have spirit, have ghosts, have presence, as artists pour their own souls into their art. A playful use of  lighting makes his wife’s figure appear to have two shadows too many, another subtle way to hint at the lives hidden within art.

The painting “Sisterhood” features Stevens’ wife and her sister looking at paintings displayed across a strong blue background in the Seattle Art Museum. To Stevens, every piece of art is inevitably autobiographical, and it is apparent in his choice of subjects. Even beyond his relationship to the people he paints, Stevens’ political values can be seen in his decision to depict his sister-in-law, an immigration attorney, and in the use of blue on the wall. Aptly, Stevens subtitled the work “The Blue Wall,” an ironic twist to current politics.

Even when considering the immediate visual work in front of the viewer, without any of the meaning behind it, the works reveal a fine tension between representing reality and manipulating that reality to tell stories. In “Inspiration,” blue hues and bright spots of red lead the eye across a certain narrative on the canvas. The faces of women are obscured, and the focus instead is on the gestures and poses of them engaging with art. This exhibit is as much an ode to art and art museums as an ode to women in art and politics. This is as much an exploration of women and art in history as an exploration of them in the present and future. But above all, it is a celebration, an “honoring,” as the title of the exhibition puts it, of the female perspective. The idea of perspective mattering at all in art suggests a fluidity of art, as interpretation of works alter throughout time. Who interprets and gets to make value judgements are often the people in power, and to Stevens, it is women’s time to shine.

Panna Gattyan is the Voice's podcast editor. She is from Budapest, Hungary, but moved to Los Angeles. She writes everything from grocery lists and postcard poems to scientific manifestos and theatre criticism.