By Jack Townsend and Jake Maher

Sam Appel (COL ’20) stepped down from his candidacy for GUSA Vice President and resigned from the GUSA Senate on Monday night.

In an email obtained by the Voice on Tuesday afternoon sent to her campaign, Gray asked volunteers to stop promoting the ticket and take down flyers that had already been posted. Appel and Gray had announced their campaign on Friday, Jan. 25.

“I made this decision because I feel passionately about the issues that my campaign, and hopefully my administration, look to address. Like I’ve said before, this is not about me, but rather about making sure that student-initiated-change comes from the students who know the issues best,” she wrote in an email to the Voice.

In her email to her campaign, Gray said that GUSA Senator Sam Dubke (SFS ’21) had stepped down from his role as her campaign’s volunteer coordinator. Dubke told the Voice that he resigned following Appel’s resignation, but preferred not to specify why Appel resigned. Gray did not specify why either stepped down.

This story has been updated with Sam Dubke’s comment to the Voice. 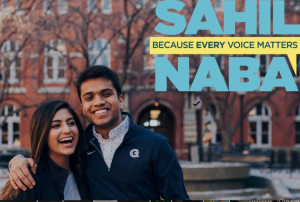