The GUSA Senate passed a resolution calling for a referendum to create a reconciliation contribution to be provided to programs to benefit the descendants of the 272 slaves who were sold by the Jesuits to keep the university financially viable in 1838 in their Feb. 3 meeting. The resolution, which required a two-thirds vote of all senators, or 19 votes, passed 20-4.

The resolution had moved through the Senate for four weeks, first being tabled and then passed by the Ways and Means committee and then being tabled by the whole Senate at their Jan. 27 meeting. The resolution was first introduced by former Sen. Sam Appel (COL ’20) and members of the GU272 advocacy team. Upon Appel’s resignation from the Senate Jan. 28, Samantha Moreland (MSB ’21) took over the introduction of the bill.

The resolution calls for a referendum to be put to the student body in April on the issue of a reconciliation contribution to be collected from students to be used to the benefit of the descendants of the 272.

Should students vote in favor, a fee would be instituted in a similar manner to the student activities fee. The initial amount would be $27.20, and would rise each year with inflation. Upon passage of the referendum, a board, comprised of five students and five descendants, would also be chartered to oversee the collection and distribution of funds.

Along with the referendum, Appel and the GU272 advocacy team drafted a charter for the GU272 Reconciliation Board of Trustees. The GU272 Advocacy team has been working for most of the year to bring the resolution to the Senate.

Before the Feb. 3 meeting, debate around the passage of the resolution had been focused on whether the collection of funds was feasible, leading to a series of amendments to clarify the role of the GU272 Board. This debate continued in the Feb 3. meeting when Sen. Evan Farrara (COL ’19) echoed those arguments in a prepared statement. He argued that the referendum raised tuition for students without using that money to their benefit, and that the reconciliation was the responsibility of the university as an institution, not of individual students.

Farrara felt that the reasons for the mandatory fee were not compelling enough to justify instituting it, comparing the students of the university to those who unknowingly profited off of corporate misdeeds. He concluded his statement by asking senators to vote for what they felt was reasonable, not for what was popular or politically expedient.

Sen. Saham Ali (COL ’21) responded to Farrara, saying that students of Georgetown do owe the descendants of the 272, as students have profited off their enslavement by being allowed to attend the university and benefiting from its education.

Moreland was eager to point out that a vote in favor of the referendum did not necessarily signal support for it, but a willingness to send the issue to the student body. Members of the GU272 advocacy team echoed this sentiment, asking that the Senators not end the conversation around the issue of the 272 in the meeting, but allow it to be put to the student body in April.

Senator Dylan Hughes (COL ’19) introduced a friendly amendment allowing oversight and adding financial and accounting guidelines to the charter. The guidelines included the board making regular financial reports, making no outside commitments, and ordering the board to comply with best practices. The amendment was passed unanimously.

Hughes, who was initially unsure if they supported the bill, endorsed it based on the changes that had been made to make the bill more technically comprehensive. Hughes expressed a desire that after all that work, the issue be put to the student body.

Several senators spoke in favor of the referendum, arguing that the fee was a small price to pay relative to tuition as a whole, and that the passage of the referendum would empower both students on campus and student activists. Sen. Logan Arkema (COL ’20) especially expressed frustration that the senate had held up the referendum for so long, taking time away from the time students had to learn about the issue. Sen. Winston Ardoin (SFS ’21) expressed belief in the GU272 Advocacy team to continue to share information about the resolution to the student body until the referendum was voted on.

Along with Farrara and Dubke, Gary Xie (SFS ’20) and Lexie Gutierrez (COL ’20) spoke against the referendum. Xie contended that this was just the beginning of the discussion, and that he would support a campaign for donations, and if a substantial amount of students donated, then the referendum could be posed. He cited the negative perception of the GUSA Senate as one reason the referendum should not be posed. Gutierrez felt that many groups of people had been negatively affected by Georgetown, and that it was not the place of the GUSA senate to tell people to which of those communities they should give money. All four of those Senators voted against the resolution.

Moreland closed the debate by expressing her fear that if the referendum was not passed, the conversation would go away. She asked senators to support the referendum in case “we never have this kind of opportunity again.” She said that “if I leave this meeting and this doesn’t pass, I’m going to have a  different perspective on this school, this Senate.”

Hannah Michael (SFS ’21), a member of the GU272 advocacy team, reminded senators that there were a lot of people ready to begin education campaign, and that voting yes would allow those people to speak.

Though Sen. Matt Buckwald (COL ’20) , Hayley Grande (COL ’21), and Harry Clow (MSB ’19) were absent, only four senators directly voted against the resolution. Upon passage of the bill, the room broke out into applause.

The April referendum will be held alongside Senate elections.

Moreland expressed gratitude to the advocacy team. “It was not an easy process, it took a lot of work for the advocacy team.” she said “We owe 100 percent of thanks to them. There were a lot of emotions everywhere, but we worked together to produce best possible referendum.”

She was incredibly happy about the passage, though felt some of the process could have been better. “It is kind of upsetting some senators did not show up because I would have liked to hear their point of view,” she said, “but now we have 7000 students to listen to.”

Michael reflected on the process so far: “It’s wonderful that student representatives in GUSA want to empower students on this campus. I’m excited to play a part in empowering fellow students to inform themselves of our university’s legacy with slavery and look forward to hearing from my fellow students.”

In other business, the Senate elected Dubke to be the Vice-Chair of the Ethics and Oversight Committee. The position, previously held by Dubke, was opened when he resigned to serve on the Appel-Gray campaign, which he then resigned from Jan. 28 following the resignation of Appel. Harrison Nugent (SFS ’20), who also ran, was concerned that Dubke’s brief allegiance with a campaign would make him ineligible to serve as Vice-Chair, though Dubke responded that he was no longer connected with any campaign and would continue to be unaffiliated.

The Senate also voted to confirm a slate of executive nominees to boards and councils. Daniel Mok (COL ’20) and Nkechi Nwokorie (NHS ’20) were confirmed as policy chairs to Arts and Race and Inclusivity, respectively. Caroline Landler (COL ’20) was confirmed to work with the Georgetown Community Partnership on behalf of the Student Advocacy Office.

On the Constitutional Council, former member William Morris III (COL ’19) was confirmed as chair and Nikhil Mishra (COL ’20) was chosen to take his place as a member. Bryce Badger (MSB ’21) was confirmed to serve as the GUSA treasurer.

The nominations were all confirmed unanimously.

Speaker Eliza Lafferty (COL ’21) closed the meeting by acknowledging that it had been a difficult few weeks for the Senate, and thanking everyone for their patience and civility. 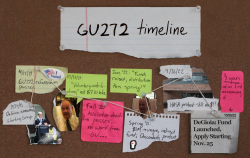 Georgetown restaurant to host Thanksgiving meal for the homeless

[…] fee, accordingto The Hoya student news outlet. And both The Hoya and the Georgetown Voice reported that proponents of the measure now plan to launch an education campaign in support of the […]

Are you insane? Charging people who were born a hundred and fifty years later for the crimes of strangers? Seriously, are you nuts?