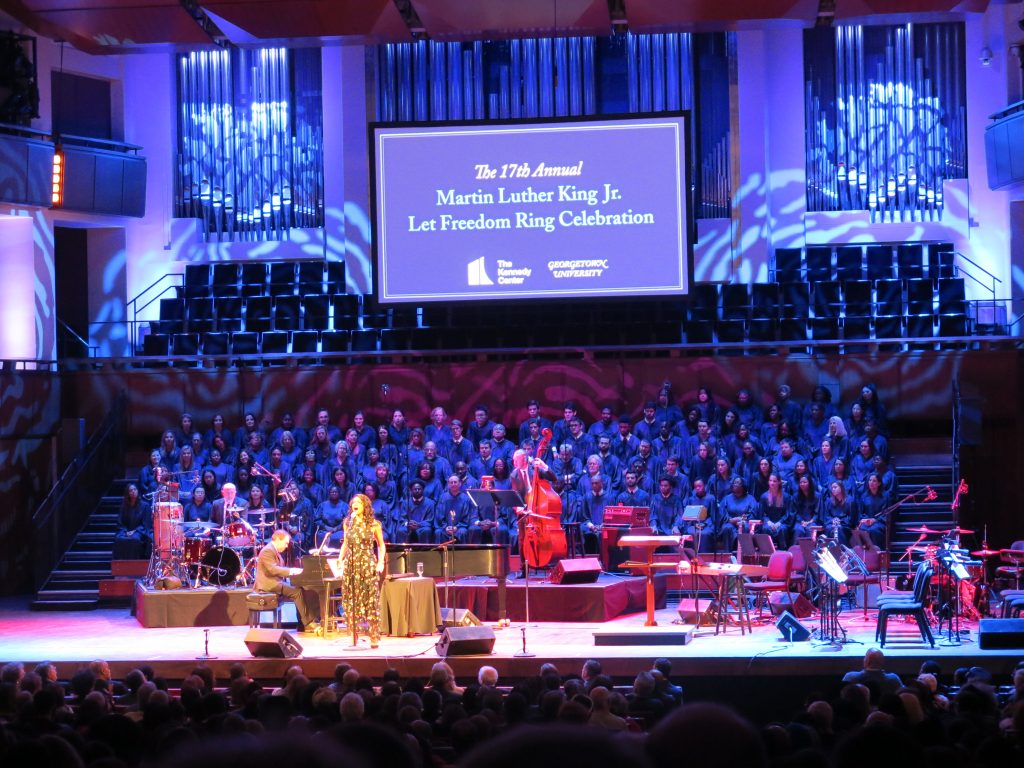 The 17th Annual Martin Luther King Jr. Let Freedom Ring Celebration, presented by Georgetown University in collaboration with The Kennedy Center, began with an accusation of inequity. Over an original gospel-inspired song entitled “American Dream/American Myth,” Messiah Ramkissaan performed a piece of spoken word poetry about the legacy and practical failure of the Fair Housing Act, a piece of legislation signed by President Lyndon B. Johnson a week after King’s assassination. The song, written and composed by Rev. Nolan Williams Jr. (in his 16th year as musical director for Let Freedom Ring!), alludes to the 2009 arrest of Professor Henry Louis Gates, a Black man arrested at his own home, as well as the racial profiling that Black folks endure when purchasing a house. “Not looking for a hand out, but a hand up,” the Let Freedom Ring Choir sang jubilantly, moving with the rhythm of Georgetown’s jazz ensemble.

It was a fitting beginning to a night of music and memory rooted in the revolutionary ideas King preached during his lifetime. Wary of shying away from the “elephants in the room” in favor of a more buoyant tone, Williams noted in his speech that 2019 marks 400 years since the first shipment of enslaved Africans to a North American colony. Remembering that tragic anniversary, Williams spoke about how he felt “compelled to push the envelope” as he was composing for the event, focusing on the injustices that reverberate from America’s original sin. The struggle for equal rights continues in the streets, in our schooling systems, and in the voting booth. If King were alive today, Williams claimed, “King would be in Flint, Michigan” and on Capitol Hill. “Somewhere in the process, I just believe that King would be taking a knee,” declared Williams to applause.

In line with King’s legacy, Hawah Kasat, the executive director of local nonprofit One Common Unity, was recognized as the 2019 recipient of Georgetown’s John Thompson Jr. Legacy of a Dream Award. Kasat received the award at a private ceremony before the performance.

“I was definitely taken aback,” said Kasat when asked of his initial reaction to the news. “I was humbled, excited and surprised all at the same time. It was a great honor.”

One Common Unity, which Kasat co-founded twenty years ago after a series of school shootings in D.C., teaches a curriculum of peace to middle and high school students by creating safe spaces to model nonviolent behavior and empathetic dialogue.

“We are not only working to liberate those who are oppressed; we are also working to liberate those who are the oppressors,” said Kasat. “I think within the framework of that idea there is a deep compassion, there’s a deep unconditional love that has to guide how we move through the world. It invites us to see all sides. It invites us to see how our liberation is tied together.”

When Tony-winning Broadway stars Audra McDonald and Brian Stokes Mitchell took the stage, the night moved toward optimism and hope. With her lilting soprano and expressive delivery, McDonald sang standards like George Gershwin’s “Summertime” and “Make Someone Happy.” Mitchell commanded the audience by way of magnetic charisma and technical mastery, singing “Feeling Good” and “Make Them Hear You.” The Ragtime pair finished their set with a duet of “Wheels of a Dream,” a tribute to the next generation and a rousing rendition that spurred the over 2,000 audience members in attendance to their feet.

Accompanied by his young niece and nephew, Kasat found resonance with the celebration’s  focus on bettering the world for the next generation, an affinity he shares with King’s work. “Being in that space on such an auspicious day…we’re honoring the legacy of a prophet, of a great human. It was overwhelming. There’s a lot of gratitude in my heart,” Kasat said.

“What a night,” said Kasat. “I will remember it for the rest of my life.”