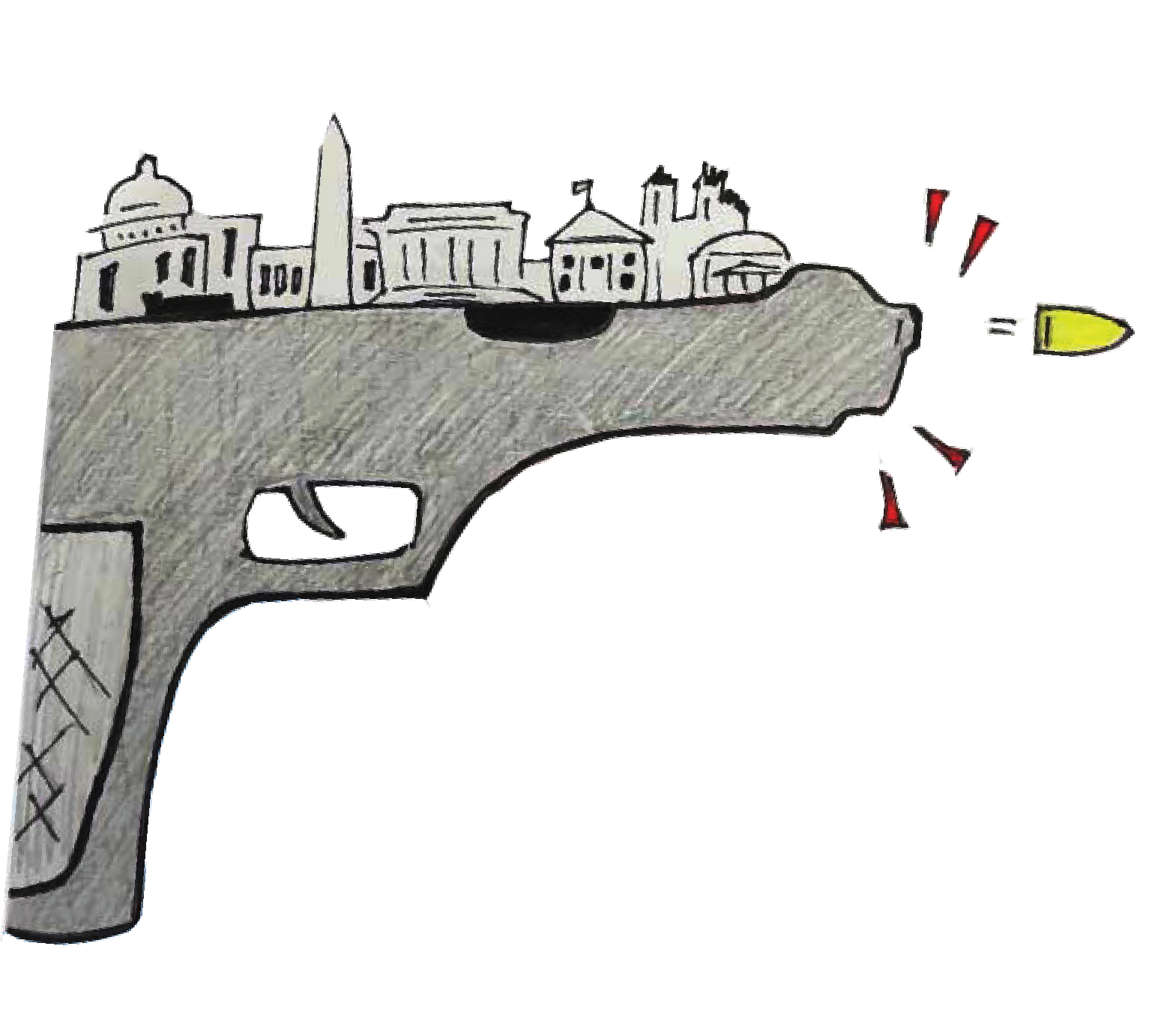 As of Feb. 12, twenty-one people have been killed in Washington, D.C., this year. Homicide rates in the District have been climbing since 2012, and this year’s rate marks a 50 percent increase from last year. The spike in gun violence coincides with a national grassroots movement for broader gun control, the energy of which was most clearly seen in the city during the March for Our Lives last year. Now in the District, gun control measures are being proposed at Georgetown, in the D.C. Council, and on the floor of the U.S. Senate.

Firearms are prohibited on Georgetown’s campus by the Code of Student Conduct and the Human Resources Policy Manual, but until last semester, there had been no university-wide ban on weapons in place. In November, the faculty senate approved such a ban, which unifies the existing provisions against weapons on campus under one policy.

“Georgetown decided to clarify and consolidate its existing policies prohibiting firearms and weapons and codify it into one, university-wide policy,” Matt Hill, a university spokesman, wrote in an email to the Voice.

The ban applies to everyone at the university and faced “little controversy,” Wayne Davis, president of the faculty senate, wrote in an email to the Voice.

Under D.C. law, it is illegal to carry a concealed firearm on the grounds of colleges and universities. Hill wrote that due to a federal appeals court loosening concealed carry laws in 2017, the university is currently taking steps to ensure this provision is still acknowledged on campus.

“We are posting signage in the coming weeks and months that reminds those entering campus about the provision of the law that prohibits firearms and weapons on private university property, including licensed, concealed handguns,” Hill wrote.

Some students, such as the members of GU Advocates for Responsible Defense (GUARD), believe that restricting firearms on campus makes the school less safe. In April 2018, GUARD delivered a letter to the office of university president John DeGioia advocating that GUPD should carry guns.

Amelia Irvine (COL ’19), a member of GUARD, wrote in an email to the Voice that she believes campus safety policy must include firearms to be effective. “Georgetown is frankly irresponsible in its refusal to even consider arming GUPD, as it leaves students, faculty, and staff vulnerable to deadly and devastating attack,” Irvine wrote. “Choosing to bow to a minority of progressive students rather than dispassionately weigh the evidence, Georgetown has maintained policies that make students less physically safe.”

Chris Stauffer (SFS ’22) and Margaret Gleason (COL ’22), co-chairs of the university’s new chapter of March for Our Lives, are both adamant in their opposition to arming GUPD. “We should not begin introducing guns to a learning environment, no matter if it’s students or police officers,” Stauffer said.

“Why do we feel the need to introduce new weapons into an environment that currently is functioning just fine?” Gleason added.

“If the University truly respects the value of Black life, it must take a preventative approach to police violence,” stated a letter from the Howard student activist group HU Resist to university administration. “As long as campus police officers have guns, there is a potential for lethal violence.”

The need for gun violence prevention is even more pressing at the city level. The recent increase in D.C.’s homicide rates—nearly 40 percent from 2017 to 2018 and 50 percent from 2018 to this year—has prompted new gun control proposals.

Earlier this month, Ward 5 Councilmember Kenyan McDuffie proposed a center to study gun violence at the local level. Little national research has been done since Congress passed the Dickey Amendment in 1996, which prohibits the Center for Disease Control from using congressional funds to research gun violence.

Mayor Muriel Bowser and MPD Chief Peter Newsham have blamed illegal firearms for the increase in homicides. “We’re arresting sometimes the same folks over and over again for carrying illegal firearms in the city,” Newsham said in a September press conference. Murder rates in neighboring Fairfax and Prince George’s County have both declined, suggesting the problem is unique to D.C. “At all levels of the criminal justice system, we have to do better,” Newsham said.

Although D.C. has strict gun policies, weaker legislation in neighboring states could be leading to an influx of illegal firearms. “To really solve these local issues, we’ve got to deal with the national issues,” Stauffer said.

Regardless, Stauffer and Gleason are optimistic about national change. On Feb. 8, the Senate Judiciary Committee heard testimony about gun control for the first time since 2011.

“Just the fact that there was a hearing is changing the conversation,” said Stauffer, who attended the hearing. “I think now that we have a gun-sense majority that we’re actually going to start having those conversations and actually start to bring up solutions.”

Georgetown’s chapter of March for Our Lives plans to continue meeting with members of Congress throughout the semester to advocate for measures like universal background checks and red flag bills, which would prevent individuals who might be a danger to themselves or others from acquiring firearms.

“Just a lot of kind of knocking on doors like ‘Hey! Remember those things we wanted you to do?’” Gleason said. “‘Please do them!’”