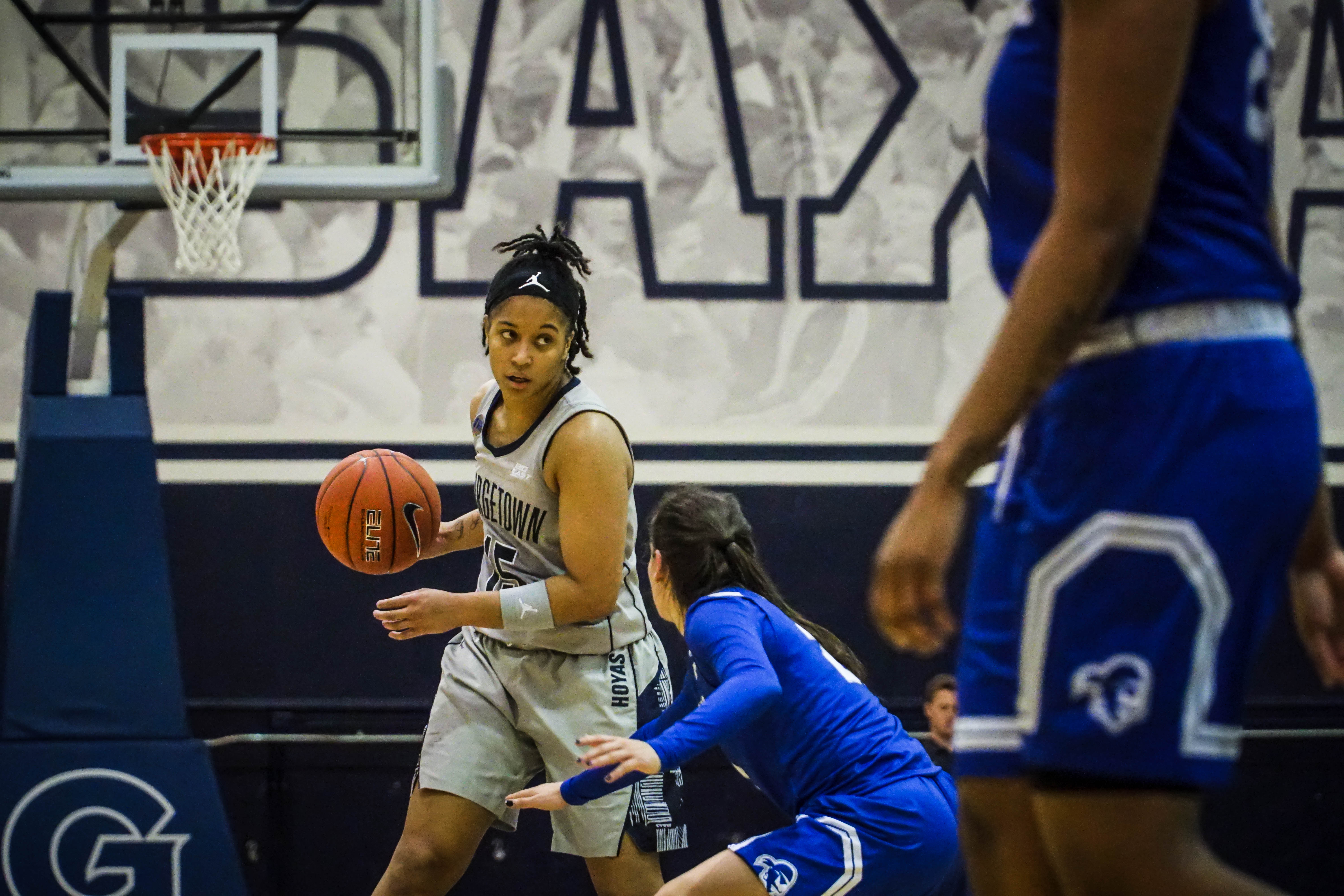 On Senior Day, the Georgetown women’s basketball team (13-14, 7-9 Big East) defeated St. John’s (14-14, 7-10 Big East) 82-80 in a nail-biter to win their second in a row. Fittingly, graduate student guards Dorothy Adomako and Mikayla Venson and senior guard Dionna White all had outstanding performances, with Adomako and White each scoring 29 points and Venson contributing 19. Adomako’s 29 was a career high. In addition, Georgetown shot 50 percent from deep on the day. The win pushed the Hoyas into a tie for fifth place in the conference.

“We came to play on the offensive end, and then they dug deep at the end,” Georgetown head coach James Howard said. “They had this look in their eyes that every time they took a shot, they were going to knock it down.”

Georgetown came out firing on all cylinders in the first period, largely due to extremely efficient jump-shooting. Adomako in particular was on fire to start things off. The 6-foot-1 guard hit a corner three for Georgetown’s first field goal of the game and converted consecutive successful and-one plays to give her nine points just three minutes in. Junior forward Anita Kelava and Venson each hit jumpers en route to an early 13-5 lead for the Hoyas. Freshman forward Kadaja Bailey stopped the bleeding for the moment, as she converted an and-one of her own for the Red Storm, but the Hoyas offense did not let up. Venson and White each hit threes, sandwiching a deep two from Adomako, to force a St. John’s timeout after Georgetown extended their lead to 23-13. A three from sophomore guard Qadashah Hoppie and a layup by redshirt senior forward Curteeona Brelove cut the deficit to six, but consecutive threes from Venson and White pushed the lead back to double digits. Adomako converted a layup just before the buzzer to give her 14 in the period. In the first period, the Hoyas shot an extremely efficient 83.3 percent from deep and 80 percent overall from the field.

“Sometimes with shooting, the biggest thing is confidence, knowing you can put the ball in the hole,” Venson said of the Hoyas’ sharp-shooting. “Everybody was dialed in today.”

In the second quarter, the two squads played more evenly. Brelove converted a layup out of the gate, but White was able to sink a contested layup. On the next Hoya possession, White missed her layup attempt, but Adomako was there to clean it up and put home the second-chance try. However, two free throws from junior guard Alisha Kebbe and a three from Bailey cut the lead back to single digits at 36-27, causing Howard to call a timeout. After the break, White went on a scoring streak of her own. Over the last five minutes of the half, she scored eight points off six free throws and a layup. Consecutive scores from Brelove helped the Red Storm stay within reach, but Georgetown still held a 49-40 lead heading into the intermission. At the half, White and Adomako had 21 and 18 points, respectively.

Following halftime, St. John’s threatened to take the game back, but the Hoyas held strong. Senior guard/forward Akina Wellere hit a layup and redshirt sophomore guard Tiana England nailed a three right out of the break, but Venson converted an and-one play directly afterward. The Red Storm then went on another five-point run, but Georgetown refused to give up the lead. After White hit a second-chance layup, the longtime Big East rivals continued to trade blows through the rest of the period, with St. John’s coming within two points several times, but unable to tie up the game. Thanks to some clutch foul shooting by White and yet another and-one play by Adomako to close out the period, Georgetown restored their lead to eight points entering the final period.

Closing out the regular season at McDonough, Georgetown found the consistency that catalyzed their first half success. Right off the bat, Adomako nailed a deep two and senior guard Brianna Jones sunk a corner three to put the Hoyas back up by 13 and induce an early-quarter timeout from St. John’s head coach Joe Tartamella. Adomako and England traded threes and for most of the quarter, and the Hoyas more or less matched every Red Storm score.

With about three minutes to go, White was called for an offensive foul, her fifth personal, and was done for the day. The Red Storm then employed the press, which proved to give Georgetown some problems. In just a few minutes, St. John’s had reduced the lead to three thanks to a couple buckets from England and two foul shots for Bailey. With 1:13 remaining, Adomako called a timeout rather than attempting an inbounds pass, allowing the Hoyas to regroup. Adomako was then fouled on her way down the court, and proceeded to hit both foul shots. After a layup by England, Venson was then fouled and hit both shots to restore the four-point lead, but St. John’s refused to go away. Graduate student guard Jasmine Sina nailed a three on their next possession to make it a one-point game. After Howard called a timeout, Venson was once again fouled and kept her composure, sinking both free throws. St. John’s quickly made a bucket and sent Venson to the line for the third time in 30 seconds. She only made one, but England’s last second effort didn’t fall, and the Hoyas were able to escape victorious.

“We all just played together – we played with a lot of energy and passion,” Adomako said. “This weekend we had a lot of fun.”

The Hoyas will finish up their regular season next week with a road trip to the midwest. They play Butler (20-6, 10-5 Big East) on Friday and Xavier (11-16, 2-14 Big East) on Sunday. Tip-off for Friday’s game is set for 7:00 p.m. ET. For continuing coverage of all Georgetown sports, follow @GUVoiceSports on Twitter.

“These last few games are very important,” Venson said. “We want to show the Big East that we’re ready. Don’t mess with Georgetown.” 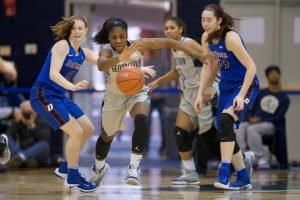