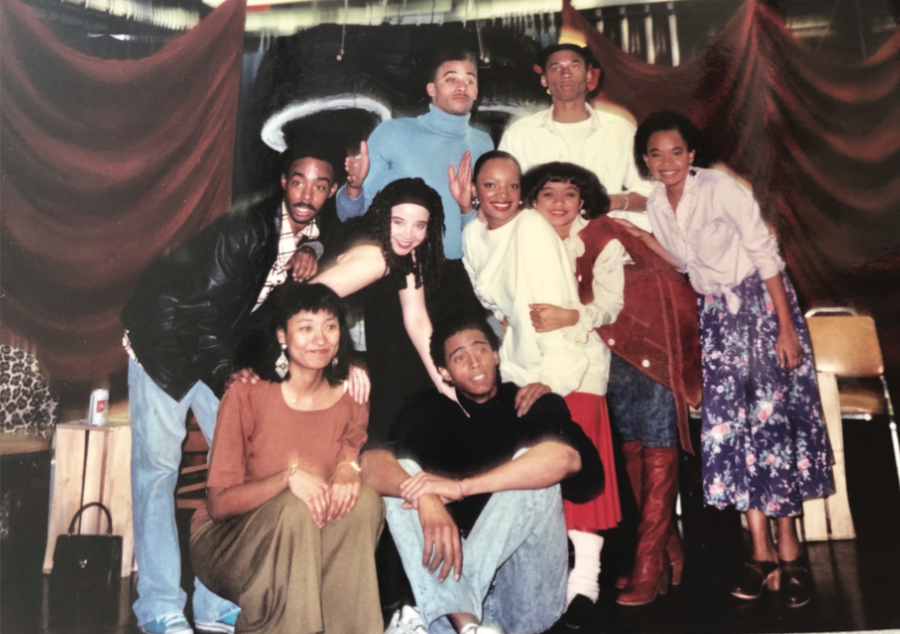 After a run-through of a scene on a Tuesday evening, Samuel Oni (COL ’22) dropped his script onto the floor of the Devine theater. Next to him, Chase Hawthorne (MSB ’20), a tall, burly presence in a Georgetown Football t-shirt and sweats, sat on the edge of a newly built prop. With Oni’s slight build and Hawthorne’s booming laugh, the two appeared to be an unlikely pair, but they’ve been brought together by a shared passion. On March 21-23, they will appear in The Colored Museum, a play to commemorate the Black Theater Ensemble’s 40th anniversary. But at that moment, they were taking a quick break before their director called them back to the stage.

Oni looked at the list of students involved in the production, noting that four of the five names listed are freshmen. He smiled broadly.

“We’ve got a bright future for the Black Theater Ensemble.”

Black Theater Ensemble (BTE) was founded in 1979, nearly 30 years after Georgetown accepted its first black undergraduate in 1950. The group aims to magnify the voices of black and minority artists and to encourage dialogue about diverse experiences through theater. In the 40 years since its founding, BTE has struggled with low participation and difficulty engaging the larger campus, but its goal remains the same: to create art about people of color.

Fatima Dyfan (COL ’21), the group’s current executive producer, sees BTE and its shows as an opportunity to make sense of history.

“Art in itself has always been a healing space for black people,” Dyfan said. “We can revisit that space and apply it to today, and we can use theater to rearticulate some narratives that have been spoken for us.”

BTE’s first production in 1979 was Ntozake Shange’s for colored girls who have considered suicide/when the rainbow is enuf, a play that addresses the intersections of race, trauma, and gender. In the fall of 2018, BTE returned to its roots and staged the show again in the Village C Theater, directed by Dyfan. She worried that for colored girls wouldn’t attract an audience on Georgetown’s campus but was pleasantly surprised by the positive turnout.

“I was scared for a long time that I wasn’t going to have anyone show up to it at all,” Dyfan said. “The response from the theater community, the black community, had to be my favorite, most satisfying experience.”

Reproducing BTE’s first show isn’t the only way the group plans to honor its 40th anniversary. For The Colored Museum, Dyfan brought in Mar Cox (COL ’16), a BTE alumnus, to direct. Aloysia Jean (COL ’16), BTE’s former executive producer, will do dramaturgy—artistic research—and alumni relations for the show, and the group is planning an event to celebrate its anniversary with current students and alumni alike. Jean expressed excitement among graduates at the chance to return to BTE.

“We’re working 9 to 5 all the time,” Jean said. “Life gets sad after college. Everyone jumped at the opportunity to get to share this space again, to get to be with your family again. It’s time we had a reunion.”

The familial environment of BTE is one that Holley Willis (SFS ’93) remembers well. She acted in BTE’s 1991 production of Spell #7 and said she is still in touch with people who worked on the show with her. Looking back on her years on campus, Willis said she valued the opportunity to be on stage with students who shared her experience as a black woman.

“If you look at my pictures from Georgetown, it looked like a [Historically Black College or University],” Willis said. “What I considered important and wanted to take a picture of was being surrounded by those people. We laughed together, we danced together, maybe we put on a play together.”

Willis speculated that the connection she and her peers forged in BTE in the ’90s might be different from the bonds that exist within the group today. She credits the civil rights movement of the 1960s as a unifying force for her and her peers.

“All of our parents were involved in the civil rights movement whether they wanted to be or not,” Willis said. “You understand as a person of color that you have an obligation to help others, and you also understand that only by coming together and doing things together are you going to be protected.”

Today, most BTE members were not raised by parents who were participants in the social movements of the 60s, but the students still value the chance to share an artistic space with other people of color.

“There’s the added complexity of a shared identity that the world sees,” Cox said. “Outside of this room all these students are still black, and that shared experience makes what we create more special.”

While BTE members praise the group for its closeness, getting students to join has proven challenging. According to Georgetown’s 2017-2018 Common Data Set, about 6 percent of undergraduates enrolled at the university in October 2017 were black.

At Georgetown, BTE is the only co-curricular theater group specifically aimed at people of color, which points to a wider lack of diversity in the theater community nationally. According to a 2018 study by the Asian American Performers Action Coalition, in the 10 years between Broadway’s 2006-2007 season and its 2015-2016 season, only 15 percent of roles went to black performers, while 76 percent went to white actors.

The discrepancies exist backstage, too. A 2017 dataset from the labor union Actors Equity Association revealed that 77 percent of stage managers on Broadway and on national tours of new productions between 2013 and 2015 were white. In those three years, only six stage managing positions went to black artists. Among Actors Equity’s black members, there was a 10 percent gap in salary between black actors in principal play roles and white actors cast for similar parts.

Isaiah Wooden (COL ’04) remembered BTE’s recruiting woes well. He was a member of BTE during his undergraduate years at Georgetown and returned to the program to serve as artistic director from 2005 to 2008 and again from 2013 to 2015. Wooden recalled going to NAACP, gospel choir, and Black Student Association meetings to seek out potential members. He cited work-study jobs and pre-professional opportunities as other obligations that can divert students’ attention from artistic groups.

“One of the biggest challenges is that Georgetown students in general are overextended,” Wooden said. “The African-American students on campus don’t have the luxury of just participating in one thing.”

In an attempt to accommodate busy schedules, Wooden said that he often worked individually with students to plan rehearsals that worked for them and tried to encourage senior members of the group to make new participants feel more included.

“It’s not something that always happens in other places, to encourage them to take care of themselves if they’re in a situation where they feel overwhelmed,” Wooden said. “We don’t leave anybody behind.”

In 2019, Dyfan hopes to gather more participants by advertising BTE as more than just an acting group. She wants to pull in students to build sets, write original plays, and manage BTE’s business side.

“Theater is one of those avenues in which many interests and many talents can be employed,” Dyfan said. “There’s so many different ways in which your day-to-day life can be thrown into theater.”

Jean praised Dyfan’s work as executive producer, saying that Dyfan believes that BTE is a good outlet for people interested in more than just theater.

“She is the Beyoncé of Georgetown. She has such a clear vision for BTE,” Jean said. “Fatima is really pulling for those people with different skill sets, and witnessing that as an alumnus is so beautiful.”

Though BTE struggles with low participation levels, its members believe that BTE’s mission is just as important today as it was 40 years ago.

“As long as Georgetown’s diversity stays the way it is, with the majority of students being white, I think that spaces for students of color are always going to be necessary,” Cox said.

BTE offers something to Georgetown’s greater campus as well as its own members, Willis said. She believes that the ensemble’s mission of sharing cultural experiences and offering diverse representation onstage complements Georgetown’s overarching Jesuit identity. Willis recalled her freshman year, when she had her first ever black, woman professor for Problem of God. She said the idea of a black, woman theologian was revolutionary for her and believes that BTE can uncover similar possibilities for other students. 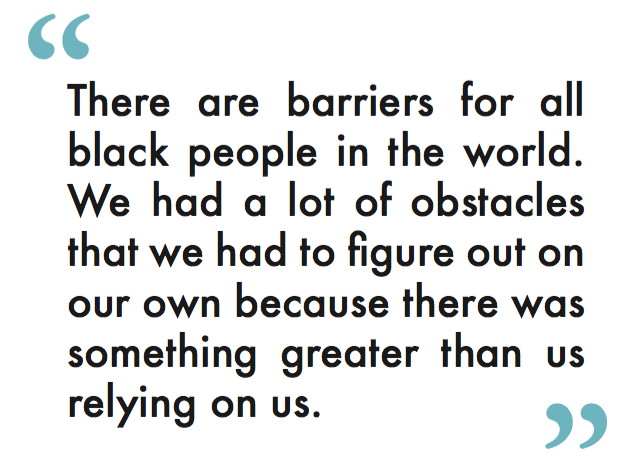 “Georgetown is about service and sharing, and that’s what any theater group is about, service and sharing,” Willis said. “I think, for example, of the phenomenon of Hamilton. It’s just great to have a different voice. If you are not exposed to writers that are not in the majority, you’re missing out on a lot of gems.”

Though BTE does put on full-fledged plays by minority artists, such as The Colored Museum, it also takes a more experimental approach to some of its activities. Its Coffeehouses, informal events hosted in classrooms, invite students to perform songs, skits, monologues, and poetry in a relaxed setting. Jean linked the Coffeehouses to BTE’s desire to recruit students who don’t have a background in theater. BTE, she said, can be a starting point.

“If you want to explore the culture, if you wanna do something totally different, this is a place where you start because there isn’t a lot of pressure,” Jean said. “We want to offer an opportunity to everyone because everyone deserves to learn.”

As BTE tries to reach a larger population at Georgetown, its members are reflecting on what exactly it means to run a theater group by black students, for black students. In the 40 years since its founding, Cox said that the club has not yet achieved the stature of prominent campus theater groups like Mask and Bauble or Nomadic.

“Institutionally, the department and the other theater groups are set up in such a way that they’ve been running off of a model for so long,” Cox said. “I feel that BTE has not had the same opportunity to hang onto that generational flow. Space is not just given, it’s something that you have to carve out for yourself and hand on to the next generation.”

Jean also sees disadvantages in the amount that the student body engages with the group. She mentioned feeling disillusioned at times when she felt that BTE received less support from Georgetown than other co-curricular groups.

“As a person of color, it’s hard to tell if you could’ve done something better or if there are more nefarious reasons behind it. It messes with your head,” Jean said. “I know people who work with BTE to be very hardworking, but there was sometimes this feeling that we weren’t doing enough. It’s constantly having to tell yourself that we are the shit, we are doing good here, and we love doing this.”

Though Jean said that BTE has historically been seen as an underdog, she believes the group has a spirit of resilience that keeps their work going.

“How do you pull together a cast when you had no people audition? How do you make a budget when you’ve never done one before?” Jean said. “There are barriers for all black people in the world. We had a lot of obstacles that we had to figure out on our own because there was something greater than us relying on us.”

This “something greater” might be the new generation of BTE members. Back in rehearsal on that Tuesday night, Cox called Oni and Hawthorne to attention for another run through their scene, which they hoped to have memorized by their next rehearsal. The two took their places, Oni standing center stage and Hawthorne waiting in the wings. This time, though, Oni did not pick up his script. 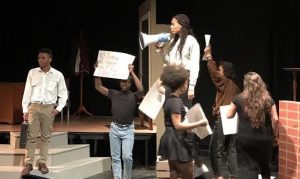