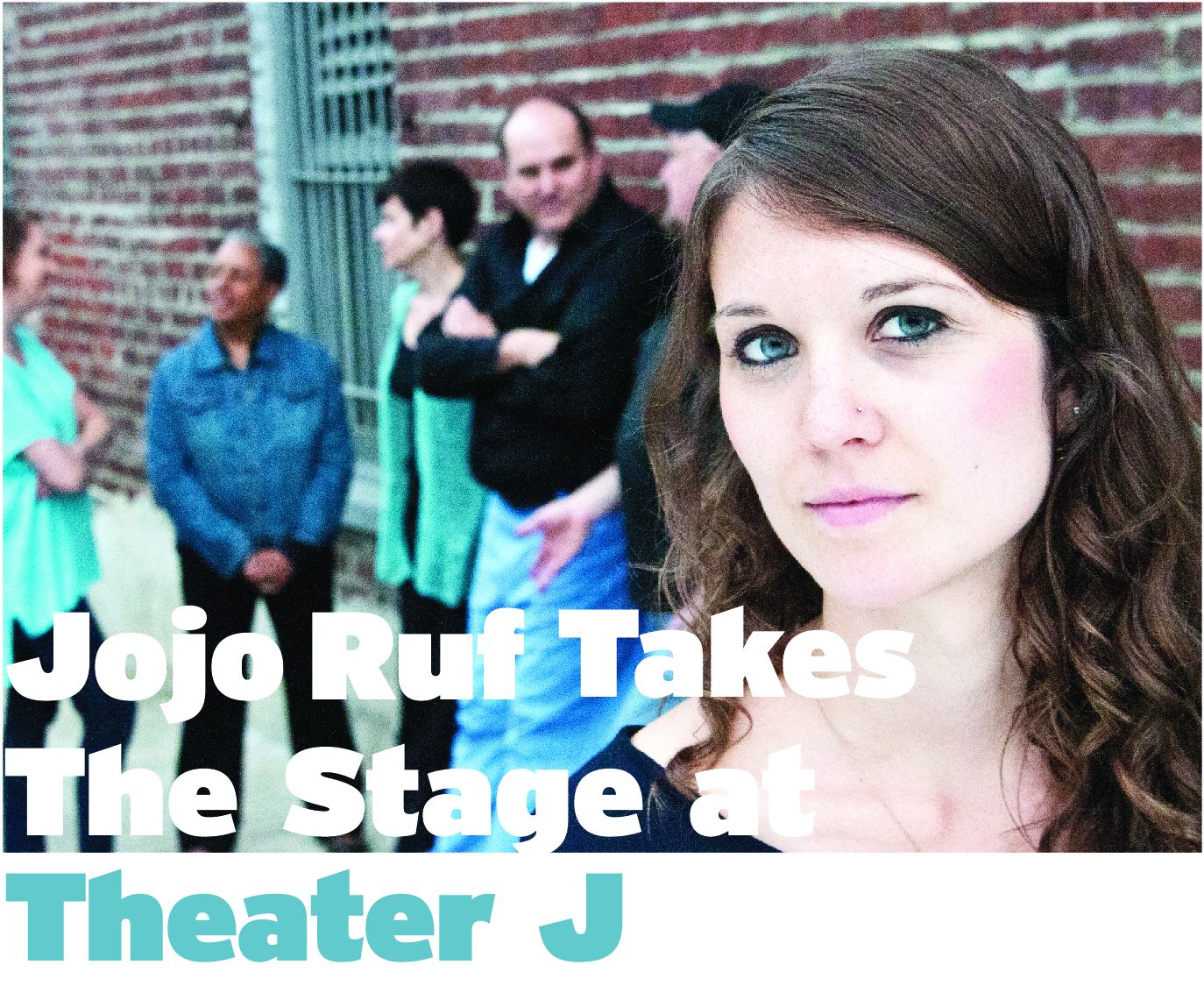 Jojo Ruf (COL ’08, MBA ’19) has been involved in the Washington, D.C., theater scene as an audience member, an artist, and a producer for most of her life. But this month, she started a new chapter in her career. On Jan. 28, Ruf became the managing director of Theater J, a professional Jewish theater in the District known for plays that highlight the Jewish and human experience. She hopes to use her vision of theater as a vehicle of understanding and peace in her new position.

Established in 1990 under the Edlavitch D.C. Jewish Community Center, Theater J has grown into one of the U.S.’s largest Jewish theaters. In 1997, the program moved into its permanent space on 16th Street in Dupont. Throughout the years,

it has shown and premiered plays from both Jewish and non-Jewish playwrights and was awarded the Mayor’s Arts Award for Excellence in an Artistic Discipline in 2008.

Though she is not Jewish, Ruf admires the way Theater J uses Jewish themes and artists to touch audiences across a myriad of religions and backgrounds.

“They don’t only speak to one specific audience,” Ruf said. “I think that many of their plays are probing questions, are querying or asking really tough questions of their characters or us as audience members.”

Throughout her career, Ruf has tried to promote this diversity of communities and stories in theater, a kind of fellowship through art she wants to bring into her time as director of Theater J.

While some kids watched Saturday cartoons, Ruf spent her childhood in theater seats. Her father, Frederick Ruf, is a Georgetown theology professor and theater enthusiast, and the shows they attended together instilled in her a lifelong

love for performance. Ruf’s career has taken her around the world in pursuit of new ways to use theater to communicate with audiences.

“I went to a handful of very odd plays with my dad,” said Ruf. “Things like that expand your worldview. They make you think outside of yourself.”

While she was at Georgetown, Ruf fell into theater unexpectedly. Though she’d performed in a few plays in high school, she didn’t enter Georgetown’s theater community until her second semester freshman year. She joined the co-curricular Nomadic Theatre group and eventually became its executive producer. In 2008, she graduated with majors in English and Theater and Performance Studies (TPST). Though she was a part of Georgetown College’s inaugural class of TPST majors, her theater major was an accident. When the College added the major, she realized that she had already taken nearly enough classes to complete the requirements and decided to go for it.

“I wasn’t anticipating majoring in it, but it didn’t feel like a risk at all,” Ruf said. “I felt immediately at home in the theater community.”

After graduating, Ruf worked for the National New Play Network, an organization that works with more than 100 member theaters to encourage producers to stage original plays, before settling back at Georgetown in 2012. She was a part of the inaugural staff of Georgetown’s Laboratory for Global Performance and Politics. The Lab works with international theater groups to stage productions in the U.S. and abroad.

“The Lab’s mission is to harness the power of performance to humanize global politics,” Ruf said. “What we’ve tried to do at the Lab is bring people into contact with each other that wouldn’t have come into contact.”

In July 2017, the Lab travelled to Segovia, Spain to premiere I Pledge Allegiance, a play written and produced by Georgetown alumni and students about growing up after 9/11 and living through the 2016 election. In September 2017, they hosted the National Theatre of Ghana in a three-day D.C. residency, during which they performed Tennessee Williams’ Ten Blocks on the Camino Real. Over the course of her time at the Lab, Ruf managed 16 full-scale productions and workshops and eight residencies. She said she was most moved by the impact their plays had on people.

“One of the most amazing things about my time at the Lab is that whether or not someone comes in thinking that they’re going to be changed, just seeing another human story onstage opens them up in a really spectacular way,” Ruf said. “Theater has a unique capacity to engender empathy in people who are experiencing it.”

Ruf experienced one such engaging production in 2015, when she was the coordinating producer of D.C.’s inaugural Women’s Voices Theater Festival. The festival brought together theater groups from the area to highlight world premieres of plays written by women. Ruf believes this effort is significant because the theater world has not yet reached gender parity. Maya Roth, a TPST professor, said that plays by women are often written off as special interest productions.

Ruf worries that theater also underrepresents work by people of color and transgender artists. A transgender playwright has never won a Tony award—widely considered the most prestigious honor in American theater—or been honored at the Kennedy Center. In July 2018, Young Jean Lee’s Straight White Men made her the first Asian-American woman playwright to open a show on Broadway. To Ruf, audiences risk missing something when a plurality of voices fail to be represented.

“If we’re producing all straight white men, that’s highly problematic because it means that there’s an incredible pool of amazingly talented people who are not being produced,” Ruf said. “And then the more diversity there is, the stronger the conversations are. They’re bringing new perspectives to stories, they’re bringing new perspectives to characters.”

Ruf thinks that a wider breadth of stories told onstage can benefit not only theater, but audiences as well.

“Storytelling in general, and theater in particular, has a really amazing capacity to open people up to stories that they wouldn’t have heard otherwise,” Ruf said. “For people to see versions of themselves onstage is really powerful.”

In an effort to champion diverse voices in American theater, Ruf has taken various positions that support new playwrights. She spent five years working for the National New Play Network. Ruf was also the founding executive and creative producer of The Welders, a D.C. theater group composed of six playwrights. Each cohort of playwrights pens and then stages a play. Once all six plays have been produced, the organization turns over to a different group. Ruf saw her work with The Welders as a chance to open doors for new artists.

“It’s really necessary to create various pipelines, whether that’s for new voices or a diversity of ideas or a diversity of aesthetics,” Ruf said. “I think it’s incredibly important to take risks on new plays and new playwrights.”

Roth, who worked with Ruf as a Georgetown student and then at the Lab, said that Ruf had an unusual combination of skills in art and in management.

“She knows how to organize herself and others,” Roth said. “And she has these profound creative and critical commitments, as well as a sense of how work can be important in the world, not just in the theater community.”

As Ruf studies for her MBA, her work managing the Lab and The Welders has given her experience in the behind-the-scenes reality of theater business. In a statement, Theater J’s artistic director Adam Immerwahr praised Ruf’s resumé, saying that he had high expectations for her work at Theater J.

“Jojo is a perfect fit for Theater J,” Immerwahr wrote. “She has an extraordinary depth of experience as a leader, and her expertise in international collaboration, fiscal management,

and strategic planning will help take Theater J to the next level as we prepare for our most ambitious seasons yet. With

Jojo in this position, we know Theater J will continue to reach an ever-growing audience with soul-stirring and thought-provoking art.”

Despite her years of experience working in the business side of theater, Ruf has encountered some logistical issues that make her work more and more challenging. Since President Donald Trump took office in January 2017, his administration has slowly tightened the requirements to obtain an O-1B visa, which grants foreign artists of “extraordinary capabilities” the ability to perform in the United States.

The government has upped the standards artists must meet in order to work in the U.S. As a result, Ruf said, artists have found it harder to travel here. Roth said that artists are caught in the same net that currently ensnares DACA recipients and Middle Eastern immigrants.

“It’s harder and harder to get visas for artists, so that communication is getting harder,” Ruf said.

Still, Ruf believes in the power of live theater to forge friendship through shared performances.

“I think theater can transcend boundaries in a really exciting kind of way,” Ruf said. “You can sit next to somebody who you’ve never sat next to before and have a communal experience in a live setting in a way that going to the movies or watching something from home doesn’t allow you to do.”

In today’s world, Ruf believes that building this understanding is more crucial than ever. She referenced deeply divisive 2018 elections in Brazil and Poland, as well as turmoil in Venezuela, as examples of where this community is lacking.

“In this time where humanity and empathy are needed more than ever, not just in the United States but internationally, the idea that a theater, any theater, is asking hard questions, is thinking critically of what our role is in a society and what our role is as humans is important,” Ruf said.

Though Ruf is bidding farewell to Georgetown’s international theater efforts for now, she’ll be back on campus soon. On March 13, Theater J will open The Jewish Queen Lear  at the Davis Performing Arts Center, featuring a handful of Georgetown students in both the cast and crew.

Ruf is no longer a child attending eccentric plays in D.C. with her father, and she’s come a long way from her days as an accidental theater major with a love of storytelling. Now, at Theater J, Ruf can transform her experiences in theater into a reality for different audiences.

“We can’t produce the same plays over and over again. I think it’d be really boring,” Ruf said. “No one would want to go see it.” 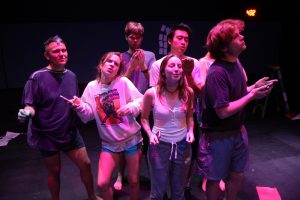 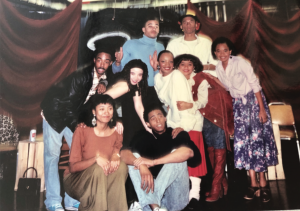