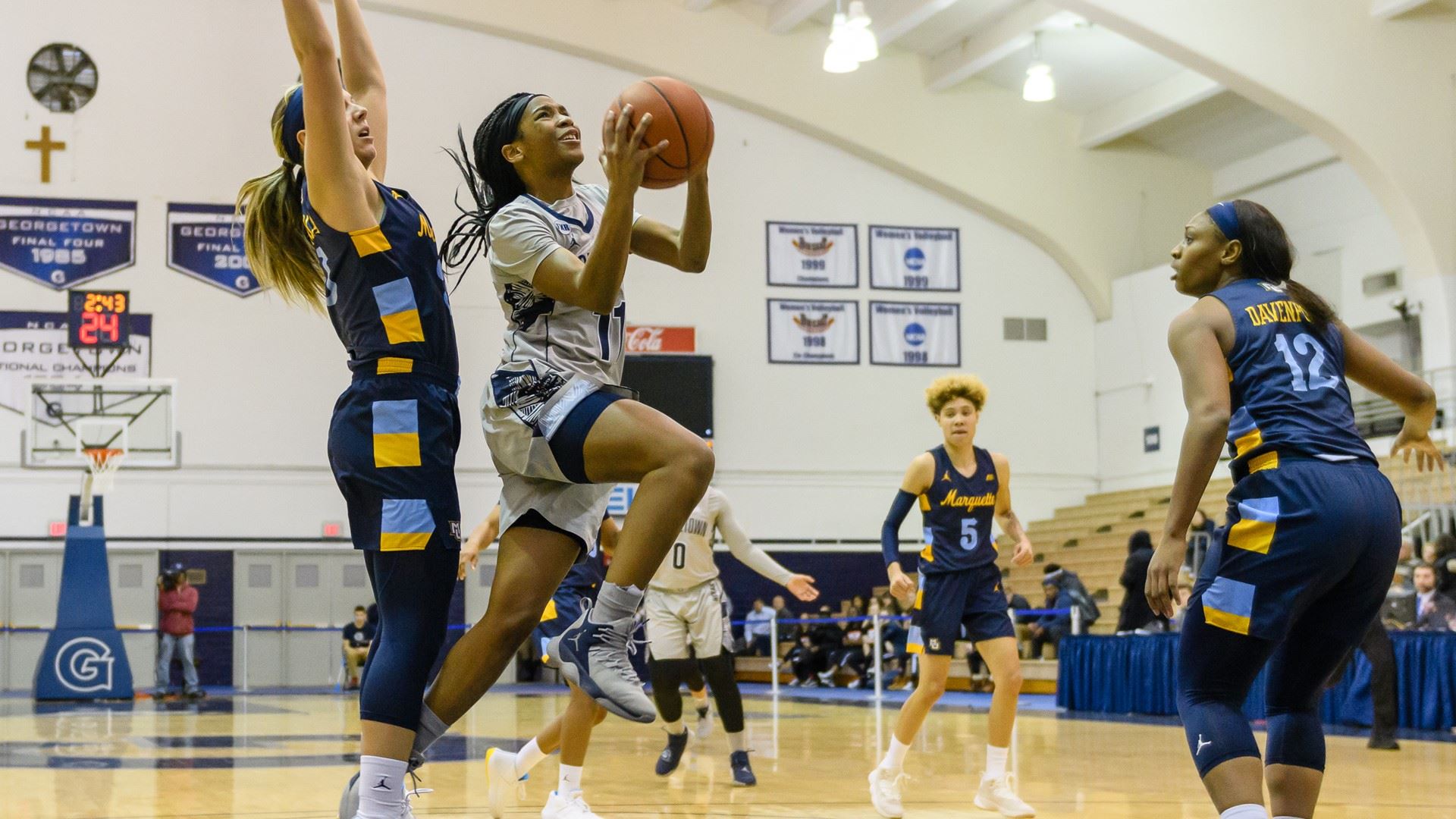 The Georgetown women’s basketball team (17-14, 9-9 Big East) was eliminated from the Big East Tournament Monday afternoon with a 75-62 loss to No. 13 Marquette (25-6, 15-3 Big East). After going down by double digits early, the Hoyas had made a minor comeback by halftime, but were overwhelmed by the Golden Eagles in the third quarter. Graduate student guard Dorothy Adomako led the Hoyas with 27 points and eight rebounds, while senior guard Dionna White added 16 points, seven rebounds, four assists, and four steals in the loss. Head coach Carolyn Kieger’s Marquette team was paced by 23-point efforts from senior guard Allazia Blockton and junior guard Natisha Hiedeman, who also combined to pull down 17 rebounds.

Marquette came flying out of the gates Monday. Fifteen seconds in, Blockton drilled a three to open the scoring on an assist from senior guard Danielle King, and after a Hoyas miss, it was sophomore guard Selena Lott’s turn to connect from beyond the arc after a King pass. The Hoyas would briefly claw back through their two veterans. After White’s jumper opened the GU scoring column, Adomako got inside and finished an and-one to bring the Hoyas within one. White then chased down a Lott miss and took it coast-to-coast for a jumper, before stripping Hiedeman and assisting Adomako on the break. Just like that, the Hoyas had ripped off a 9-0 run in just 1:23. Blockton would hit two threes that sandwiched one from the Hoyas to knot things at 12, after which Marquette really got rolling. A jumper from King restored the Golden Eagle advantage before back-to-back Hiedeman triples pushed the lead to eight. The Hoyas had gone ice cold from the field and did not pull down any offensive rebounds in the first quarter as they trailed 22-12 at its conclusion.

Two Hoya turnovers, coupled with the Blue and Gray’s failure to slow the Marquette offense, threatened to make things ugly towards the beginning of the second. An and-one from Blockton underneath put an exclamation point on what had become a 25-2 run. Adomako regained her touch with a jumper in the paint and another successful and-one, before connecting from distance as the Hoyas climbed back to within arm’s reach. The Hoyas would force four more turnovers before halftime which they turned into six points, while Adomako was working at all three levels. Fittingly, White had the final say in the period, scoring inside as the Hoyas worked the deficit down to just six, 39-33, at halftime.

Adomako had 12 points in the second quarter alone, while the Hoyas were shooting 42.9 percent from deep and had forced seven turnovers. But Marquette’s success from beyond the arc (7-of-14) and Blockton’s 16 points meant the Golden Eagles still had some breathing room heading into the second half.

The third quarter actually began with a 4-0 Hoyas run, with White assisting Adomako before scoring herself as the Marquette lead shrunk to just two. Back-to-back threes from Hiedeman and King nearly returned the margin to double digits, but the Hoyas battled back, with White picking up a block and a steal before the media timeout. Inside of five minutes, however, the Golden Eagles showed their top-25 pedigree. A quick jumper from senior guard Amani Wilborn and another Lott three forced a quick timeout from Georgetown head coach James Howard, from which Marquette truly caught fire. Trying to keep pace, five straight Georgetown possessions ended in either a missed three or a turnover, while Marquette cashed in with threes from Wilborn, Hiedeman, and Blockton. At the end of the third, the Hoyas trailed, 62-42.

The Hoyas continued to try to battle back in the fourth from the perimeter, this time with more success. A three from Adomako before back-to-back connections from Venson were part of a 15-4 run to open the quarter which drew a pair of timeouts from Kieger. Returning Hiedeman and King to the game, the Golden Eagles largely buckled down from there, going on a 7-0 run as the Hoyas committed two more turnovers. Howard did a five-for-five swap with 0:55 remaining to give his starters, which included four graduate students or seniors, a proper send off from Big East play, as the game ended 75-62.

Georgetown’s Big East run is now concluded – the NIT, the Hoyas’ most likely postseason destination – will announce its bracket next week on March 18. Follow @GUVoiceSports on Twitter for coverage of all winter sports at Georgetown. 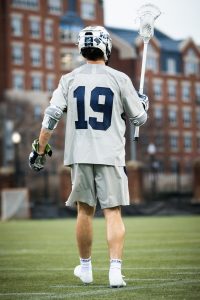