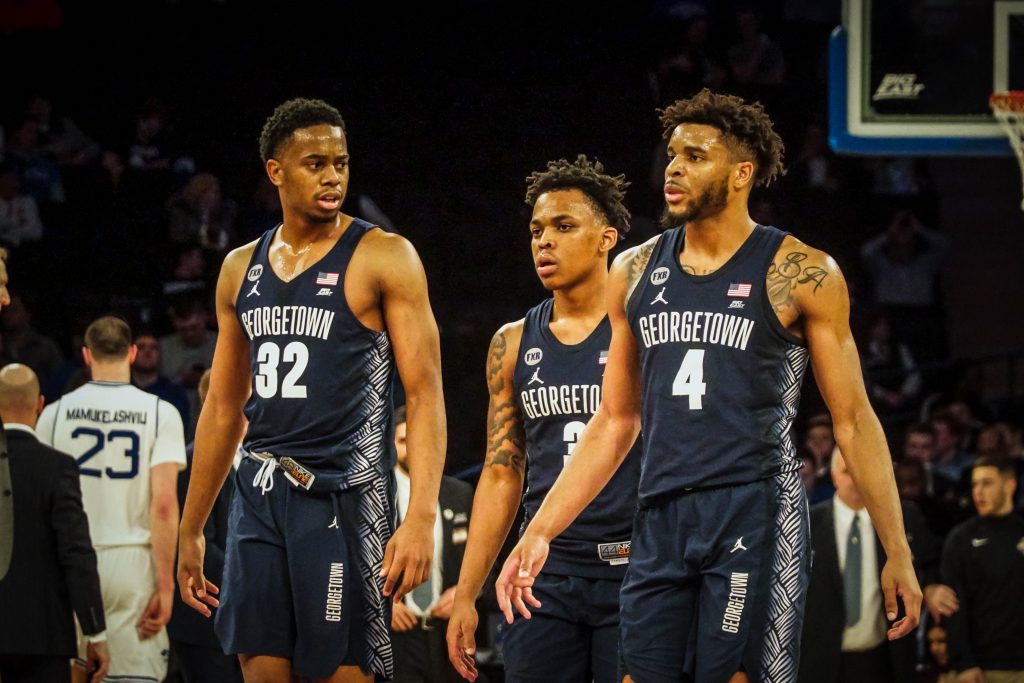 On Wednesday, the Georgetown men’s basketball team (19-13, 9-9 Big East) returns to the postseason for the first time since the 2014-15 season, and the first time since head coach Patrick Ewing took over the program. The Hoyas crashed out of the Big East Tournament in the quarterfinals last Thursday, missing out on a chance at the NCAA Tournament, but they were able to obtain a 3-seed in the National Invitational Tournament Sunday night. Opposing the Hoyas will be the 6-seed Harvard Crimson (18-11, 10-4 Ivy League), regular season champions of the Ivy League. Wednesday will also be the first time that Georgetown has played at McDonough Arena on campus since Nov. 16, 2016, when the Hoyas fell 78-72 to Arkansas State. Tip-off is set for 7:00 p.m. ET. The game can be watched on ESPN2 or streamed on WatchESPN or guhoyas.com.

The Hoyas are coming off a 73-57 defeat at the hands of Seton Hall (20-13, 9-9 Big East) at Madison Square Garden last Wednesday. Though Georgetown outscored the Pirates 29-20 in the second half, they were unable to overcome junior guard Myles Powell’s blistering 29-point outburst in the first half. Guard James Akinjo, fresh off winning the Big East Freshman of the Year award, was Georgetown’s top performer, scoring 15 points on six of 10 from the field. Senior center Jessie Govan disappointed, as the All-Big East First Team selection mustered just eight points. Guard Mac McClung and forward Josh LeBlanc, All-Big East Freshman Team selections, combined for just 12 points, though LeBlanc left the game in the first half after suffering a back injury. LeBlanc should be ready for Wednesday’s game.

Harvard fell just short of their first NCAA Tournament bid since 2015, dropping the Ivy League Championship 97-85 to Yale on Sunday. Despite 38 points from junior guard Bryce Aiken, the Bulldogs’ second half performance was too much for head coach Tommy Amaker’s Crimson. Besides Aiken and freshman guard Noah Kirkwood, who notched 19 points, no other Harvard player scored in double digits. Georgetown’s perimeter players will have a tough task limiting the damage done by Aiken, who is averaging 22.6 points per game this year. In the frontcourt, the matchup of Govan and junior forward Chris Lewis presents an intriguing battle. Both big men bring plenty of size to the table, as Govan stands at 6-foot-10, 255 pounds and Lewis at 6-foot-9, 235 pounds.

With the NIT comes a handful of rule changes. Among the most notable are an extended 3-point line and that team fouls will be reset at the completion of 10 minutes in each half, with five team fouls activating the double bonus.

This is the first time that the Hoyas and Crimson will have played since December 23, 2009, when Georgetown triumphed 86-70 in Washington, D.C. Georgetown leads the all-time series, 3-0.  For live coverage of the game an continuing coverage of Georgetown sports, follow @GUVoiceSports on Twitter.

Tristan Lee Tristan is the Voice's sports editor and a junior in Georgetown College. He mostly covers Georgetown's football, basketball, and baseball teams.