By Noah Telerski and Julia Pinney 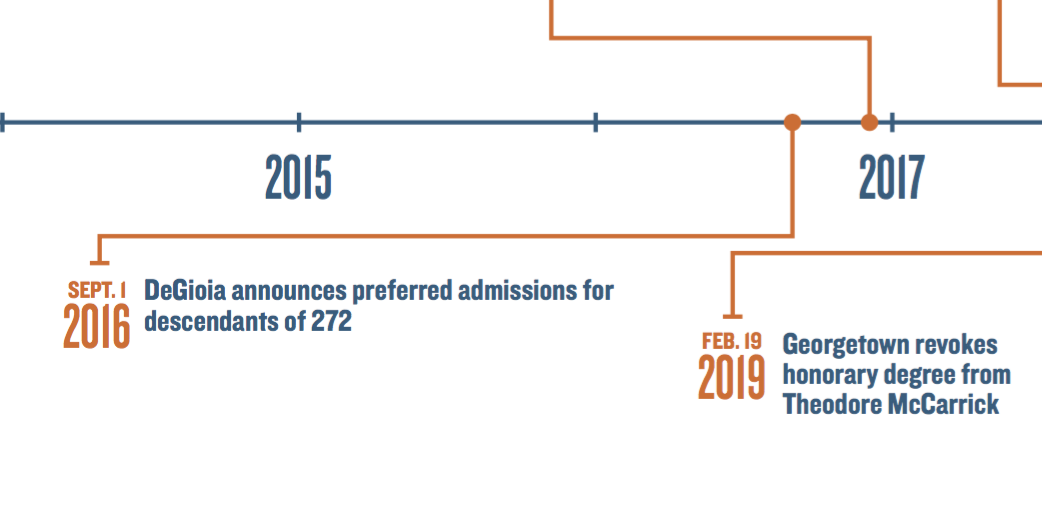 Wondering what were the biggest stories the Voice covered over the past decade? Luckily, we looked through our archives so you don’t have to.

When President Barack Obama gave an economic policy speech in Gaston Hall, the gold IHS, symbolizing the name of Jesus Christ, was notably covered by a black-painted piece of plywood. The 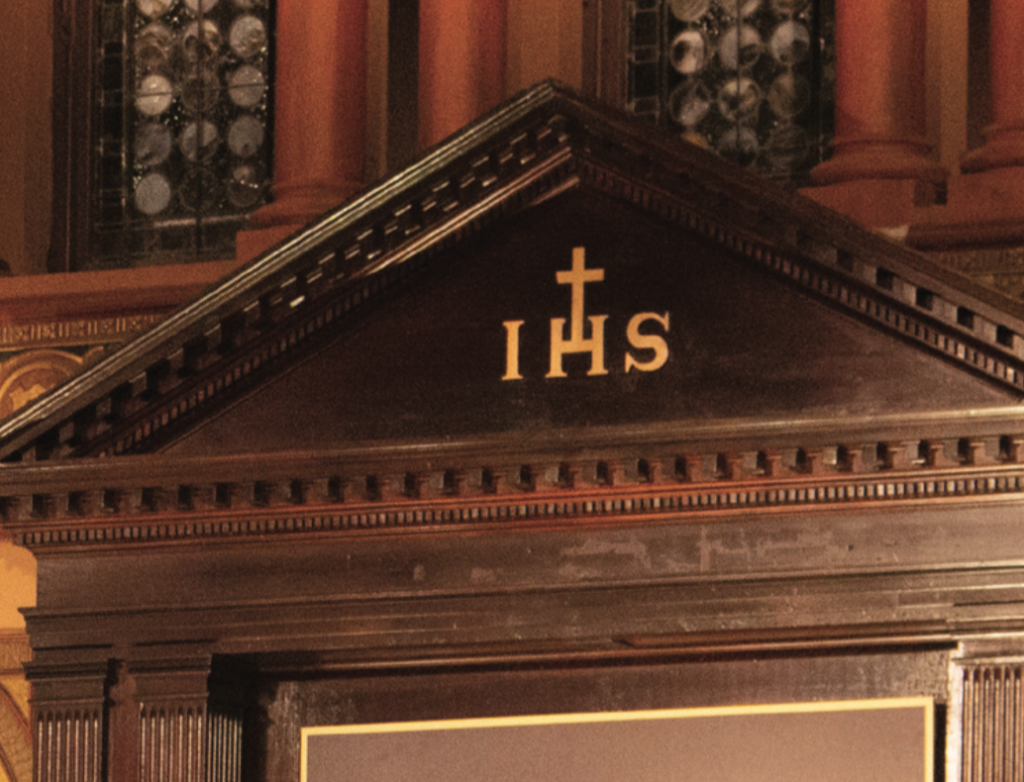 monogrammed symbol is normally visible above the Georgetown University emblem. The associate university vice president of communications said the White House asked for a simple background of
flags and drapes, consistent with other policy speeches, and the university felt it was most respectful to cover the symbols so they were not seen out of context. Georgetown faced backlash from students and the Cardinal Newman Society for their choice to cover Jesus’ name, contending Georgetown was abandoning its Catholic and Jesuit identity.

Two years after Georgetown released its long-term goals for the campus in the 2010 Campus Plan, it presented its final defense of the initiative which included expanding Lauinger Library, creating a student center in New South, and increasing enrollment. Debates and negotiations over the previous few years strained relationships between Georgetown and the Advisory Neighborhood Commission, the Burleith Citizens Association, and the Citizens Association of Georgetown over the plan. Georgetown’s neighbors were especially concerned with the proposed enrollment of 3,400 additional graduate students, a 29 percent increase. They argued the increase would force undergraduate students to move further into the surrounding neighborhoods, exacerbating existing tensions between the residents and students. The neighbors’ complaints stemmed from continual issues of trash accumulation on neighborhood streets, noise from off-campus parties, and general disorderly conduct. Georgetown’s later implementation of a three-year housing requirement in 2014 was a direct result of neighbors’ concerns. The agreement did not last its 10-year lifespan and was replaced in 2017 by a new 20-year campus plan. 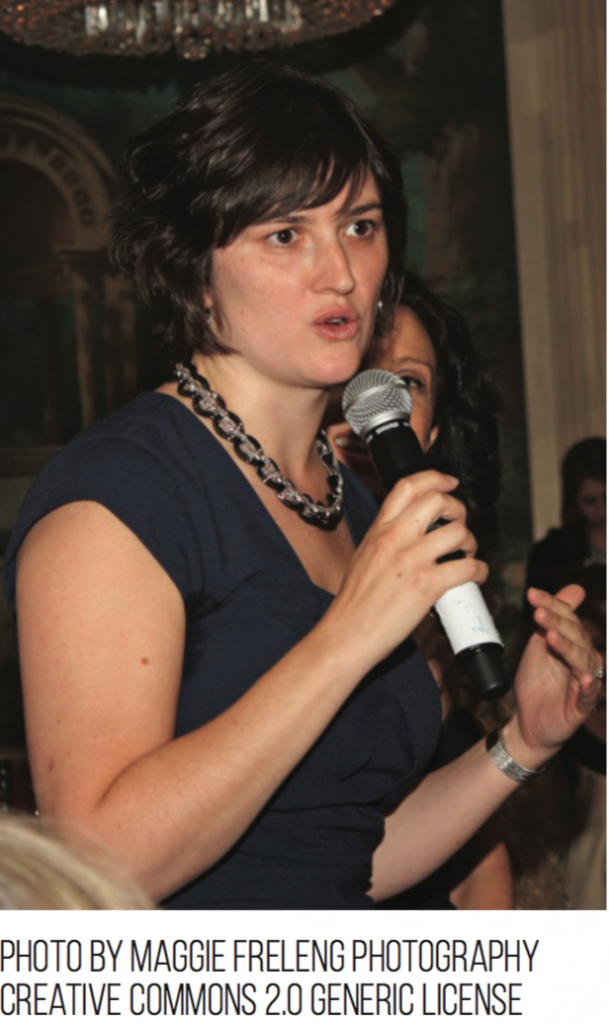 contraceptives, including religiously affiliated organizations. On his radio show, Limbaugh called Fluke a “slut” and said he would buy “all the women at Georgetown University as much aspirin to put between their knees as possible.” Fluke, previous president of the law school’s Students for Reproductive Justice group, was originally going to testify in front of the full House Oversight committee, but committee chair Darrell Issa (R-Ca.) refused Fluke’s testimony, arguing the Democrats had not submitted her name in time. Fluke later testified before the House Democratic Steering and Policy Committee, but the Republican-controlled House did not allow her testimony to be televised.

GUSA presidential candidate Jack Applebaum (COL ’14) was outed as a member of the Second Society of Stewards, a secret fraternal order on Georgetown’s campus, by an anonymous online blogger calling themselves ‘Steward Throat.’ Steward Throat had obtained screenshots of messages in which members discussed their involvement with the group. The news broke just days before the GUSA election, causing an uproar across campus. Applebaum lost the election. Adam Ramadan (SFS ’14), a vice presidential candidate on a different ticket, was also revealed to be a member of a different secret society, unaffiliated with the Stewards, but the revelations harkened back to when the Stewards were first exposed in 1988 and brought the society into students’ conversations once again.

Existing student enthusiasm for sustainability initiatives propelled the creation of the Office of Sustainability in 2013. In the months preceding its founding, students authored a report titled “Visions for Sustainable Georgetown,” which included recommendations of immediate and long-term goals for creating a more eco-friendly campus. The formation of the new office, headed by Audrey Stewart, bolstered the university’s commitment to implementing environmentally sustainable practices across its campus and the city as part of D.C.’s College and University Sustainability Pledge. DeGioia, along with eight other D.C. university presidents, signed the pledge in February 2012. However, the university is now facing opposition in 2019 against one of its largest sustainability projects: a solar panel installation that would require the clear cutting of 200 acres of forest to build.

In front of a full Gaston Hall, university President John DeGioia offered a formal apology and pledged preferred admissions status for descendants of the 272 enslaved people sold by Georgetown in 1838 to keep the university solvent. With a number of descendants in attendance, DeGioia 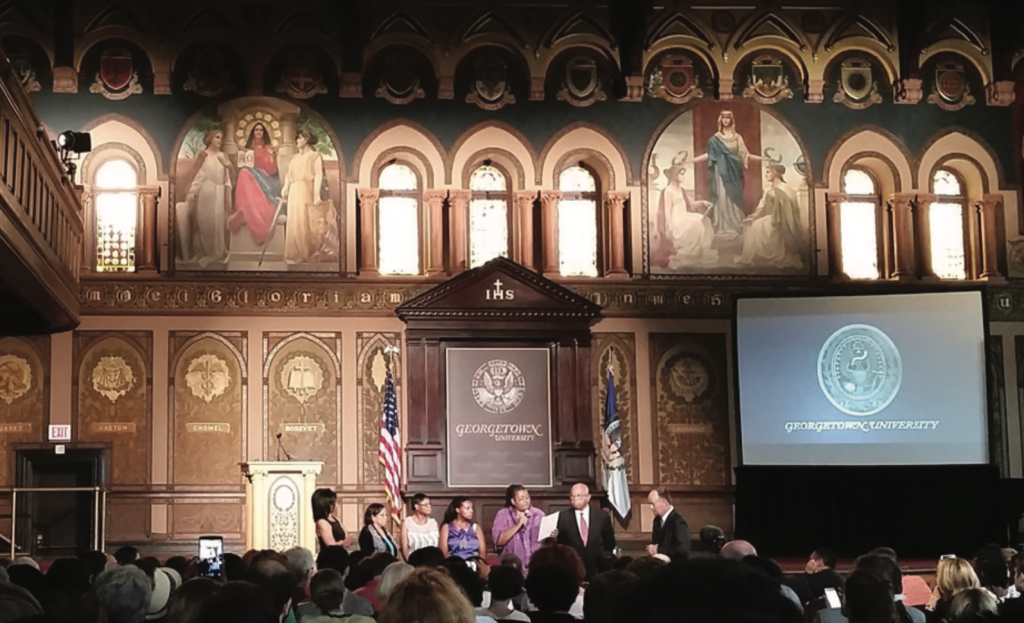 presented the recommendations of the Working Group on Slavery, Memory, and Reconciliation alongside Rev. David Collins, S.J., the chair of the working group. Some of the other recommendations included rededicating two buildings named for past Jesuits involved in the sale, establishing an institute to study slavery, and erecting a living memorial on campus. DeGioia told the Voice, “We can’t be in denial about an important, painful, tragic portion of our history.” Students will vote on a resolution to raise funds for the descendents through an increased student activities fee in April 2019. 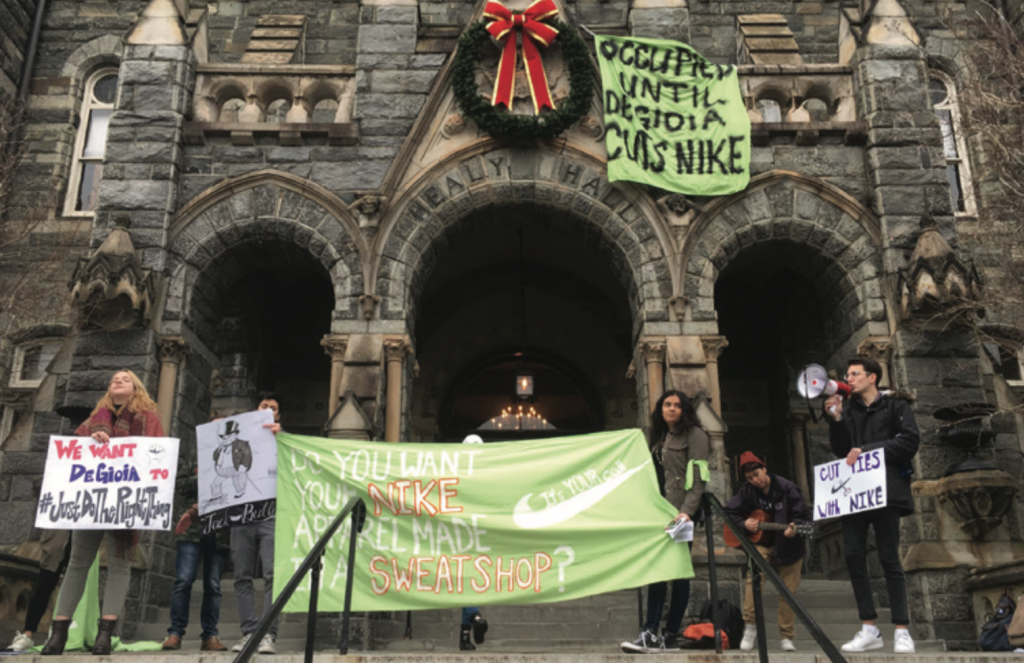 when renewing their licensing contract. Of the 17 students who occupied the office on that Thursday morning to protest the working conditions in Nike factories that made Georgetown apparel, only seven remained the next evening. These students stayed despite being threatened with sanctions from the Office of Student Conduct. Eight participating students were sanctioned for staying the night despite being told to vacate the office. The university let its contract with Nike lapse, but signed a new one on September 30, 2017, once the company agreed to give access to the watchdog organization.

Eighty-four percent of graduate students working as teaching and research assistants voted in favor of unionizing and being represented by the Georgetown Alliance of Graduate Employees (GAGE) in negotiations. The election was held under an agreement reached between GAGE and the university on April 2, 2018. Both parties agreed to hold the election outside of the National Labor Relations Board (NLRB), meaning that even if the NLRB were to reverse its current ruling that graduate employees at private universities can unionize, Georgetown would still recognize the union. GAGE, who will be represented by the American Federation of Teachers, will begin collective bargaining over hours, stipends, and benefits this spring.

A working group of Georgetown’s Board of Directors decided to revoke the honorary degree the university had awarded to Theodore McCarrick in 2004. The decision came three days after the Vatican defrocked McCarrick, the former Archbishop of Washington, due to credible allegations of sexual abuse, marking both the first time a former cardinal was laicized due to sexual abuse and the first time that Georgetown revoked an honorary degree. Student activists had been calling for the revocation since McCarrick resigned from the College of Cardinals in July 2018. Though they had also called for the university to revoke the degree given to Cardinal Donald Wuerl, who was accused of covering up abuse while he was the Archbishop of Pittsburgh, the university did not rescind his degree.

Former men’s and women’s tennis coach Gordon Ernst was one of 50 people indicted in the nationwide college admissions scandal. Ernst plead not guilty to charges that he accepted over $2.7 million in bribes to designate unqualified applicants as Georgetown tennis recruits to smooth their way into the university. Following an internal investigation into his recruiting practices, Ernst resigned from Georgetown in June 2018, two months before taking a job at the University of Rhode Island. The parents of four Georgetown students who were accepted to the university, three of whom matriculated, were also charged. Coaches at UCLA, Stanford, Wake Forest, and USC were also implicated alongside a number of other parents, including celebrities Lori Loughlin and Felicity Huffman, in the scandal that grabbed the nation’s attention and re-opened conversations about the role of wealth in elite university admissions. 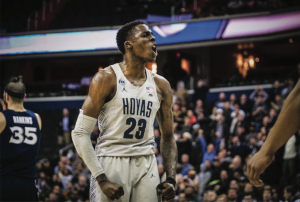 Sustained Success for Hoyas on the Field and on the Court