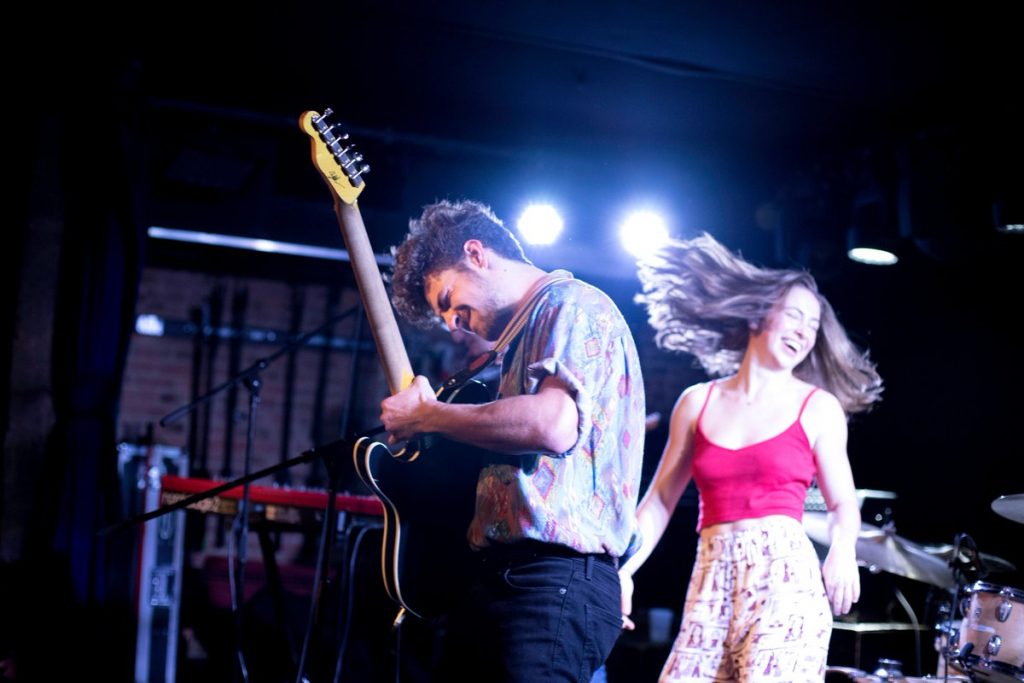 “It feels incredible,” said Dickstein about performing with Melt at Georgetown for the first time. “I’m so excited. It’s such a great feeling to be able to share a big part of what I do in my time with all my friends here at school. I’m honored that people are coming out to see us. Worlds colliding.”

His band, in which he plays the piano and occasionally even sings, has gathered over two million streams on Spotify and has played all over the Northeast, often on college campuses. Their most popular song, “Sour Candy,” has been covered by various acapella groups and other performers online.

Melt’s gig in Bulldog Alley transformed the space. Although the crowd did not fill the room, you could hardly remember that you were still in the same building as The Royal Jacket Deli.

Melt is a chaotic family of eight, representing an array of instruments, including the drums, piano, guitar, trumpet, and saxophone. The band has a unique and refreshing style, an amalgamation of pop, soul, and rock. The lead singer Veronica Stewart-Frommer’s raw, beautiful voice, and the powerful role of oft neglected instruments gave rise to a strong performance. The band didn’t suppress any instrument behind the vocals, each one getting its own chance to shine in long (and satisfyingly so) solos.

Between the recorded and live versions of their discography, the live songs are undoubtedly more impressive. While the studio recordings also include instrumental solos, they are only four to five minutes long. In live performances, however, the band takes almost ten minutes to get through one song due to extended solos that gradually build up, delighting the crowd.

Listening to the many covers of their song “Sour Candy” on Youtube, it becomes evident how particular the band’s songs and style are. Without the full eight-member crew, other performances inevitably lack the trumpet, saxophone, and drums that empower their music.

Part of the concert’s success was how much the band enjoyed itself on stage, often dancing, smiling, and riffing. The audience, too, danced without restraint, feeling enamored and connected with Melt. The band has only a couple of original songs, so they covered other artists during the concert. The band hopes, however, to put more music out this summer. Besides “Sour Candy,” they have original songs called “Inside” and “Oh Brother.” In the latter, Dickstein provides vocals, his deep, velvety baritone nicely balancing out Stewart-Frommer’s voice.

At the end of the performance, the crowd clapped and called for a reprise with determination, until the band re-emerged to play one more song. After the true end, students rushed to buy Melt’s wicked merch.

Melt seems headed for success, yet with all eight members attending different colleges, they will need to be driven to achieve that success. “We don’t really know what’s in our future, which is kind of exciting,” said Stewart-Frommer. Hopefully Georgetown will see them again soon, this time with an even bigger reception.

Panna Gattyan is the Voice's podcast editor. She is from Budapest, Hungary, but moved to Los Angeles. She writes everything from grocery lists and postcard poems to scientific manifestos and theatre criticism.