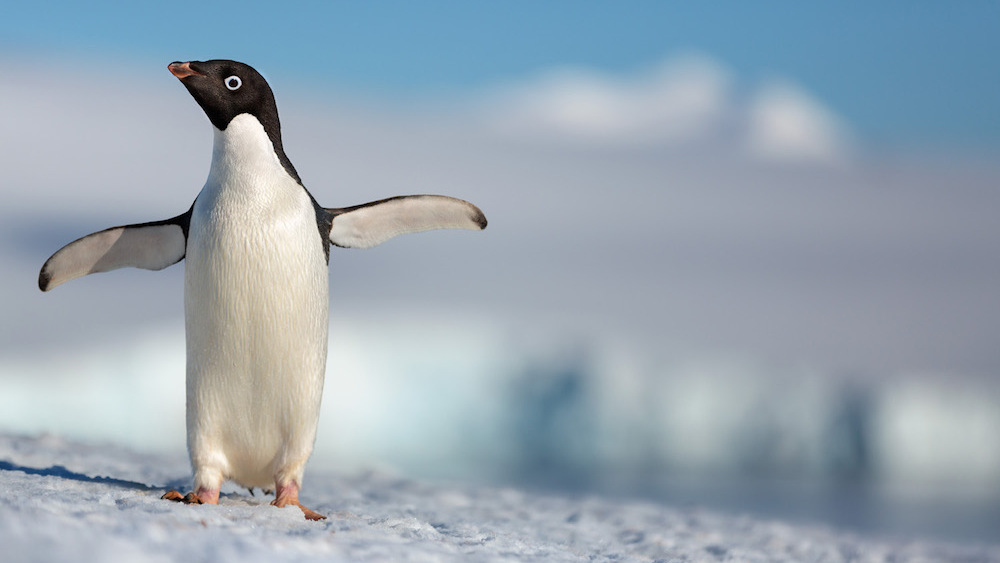 Unforgiving ice and snow bombard the Antarctic tundra. After this storm, the plain is desolate—lifeless. Suddenly, a beak breaks through the blanket of snow. Against all odds, Adeline the penguin has survived, with an egg in tact underneath her. This is not just a showing of survival, it is a display of resilience. Disneynature’s Penguins continues the brand’s formulaic, yet effective approach to documentary filmmaking by creating a heartwarming narrative around organic animal footage.

The film follows an Adélie penguin named Steve as he migrates south to the Adélie mating grounds to start a family with Adeline. The two love birds care for their eggs, fish, raise their chicks, and fish some more. Steve also stumbles into a few misadventures involving elephant seals and emperor penguins. The premise is basic, but Disneynature manages to make this documentary into a story about love, perseverance, and family.

This movie shines in its use of cinematography and musical score. The shots are breathtaking—from masses of penguins wandering across the ice and gracefully gliding underwater, to close-ups of Steve and Adeline intimately touching beaks. The excellent cinematography, while aesthetically pleasing, also brings the viewers closer to the actual subject of the film: the penguins. Through authentic scenes that occur thousands of miles away we can better understand the lives of the penguins and their Antarctic ecosystem. Wide aerial shots of Steve trekking through icy 80 mile-per-hour winds show his determination to feed his family. Vivid footage of leopard seals hunting baby penguins—as hard as it is to watch—shows the danger that the Adélies face along their journey on the ice floes.

The music in this movie adds a fun flair. The bright instrumental theme that accompanies—and mimics—the waddling of the penguins makes many objectively bland scenes into joyful ones. Simply pausing the chipper whistling and cascading strings as Steve trips or falls serves as effective comic relief. This isn’t your typical nature documentary, and the musical choices reflects this. Steve and Adeline conduct their mating rituals to REO Speedwagon’s “Can’t Fight This Feeling,” and the ending scene, in which Steve walks across the ice to Whitesnake’s “Here I Go Again” is both uplifting and unforgettable.

The film is narrated by Ed Helms, best known for playing Andy Bernard on The Office. This choice may seem unusual, and that’s because it is. Disney is constantly looking for ways to separate its Earth Day movie specials from more traditional nature documentaries. Helms’ comedic style fits with the script’s third-person narration—a narration that’s both educational and relaxed. Perhaps more unexpected is the first-person narration Helms undertakes from the points of view of Steve and other animals. Like a dad at a zoo, Helms gives voice to Steve with various, aggressively relatable remarks like, “I should start working out,” and, “Man, I collected some good rocks today.” Many individual pieces of this narration are fairly cringe-worthy, especially when compared to other comedic elements that come across as relatively effortless, like the manipulation of the score. However, since it’s geared toward a younger audience, the movie is ultimately better for it.

Disneynature offers viewers beautiful scenes that they would not otherwise be able to experience. This also means, however, that it has a responsibility to present audiences with accurate information. Penguins’ lack of any remark on climate change was extremely disappointing, especially given the fact that Disneynature makes many of its documentaries to celebrate Earth Day. While the desire to focus on an insular narrative is understandable, filmmakers could have inserted a few sentences on the topic, like when Helms discusses the unusual early movement of certain ice floes.

This adherence to a specific narrative is also a result of the brand following its own obvious formula. Bears (2014) tells the story of Sky as she raises her two cubs. Monkey Kingdom (2015) has Maya care for her son, Kip. All Disneynature has to do is attach a name to an animal raising its offspring to make objective footage into a heartwarming story that audiences can relate to. This is both a feat and, perhaps, a vice. With these human names come projections of human emotions, from Helms’ all-too-relatable quips to the transformation of a mating ritual into a love scene. Are these aspects enjoyable? Yes. Are they entirely accurate? No. Instead of weaving a narrative, Disneynature may simply be creating a story that does not actually exist.

However, this is the alternative to the cut-and-dry, Planet Earth style of documentary. With creative flourish comes enhancement, which is ultimately an apt price to pay for overall informative entertainment.  One of the film’s most important features is that it is aimed to entice younger viewers. If Helms’ narration, an exciting score, and a compelling storyline are enough to make at least one child curious about the wonders of the natural world, then Penguins, for all its flaws, is a resounding success.