Graduate Employees’ Union Begins Third Round of Negotiations with University

The Georgetown Alliance of Graduate Employees (GAGE) entered its third round of negotiations with the university on April 8. GAGE represents the unionized interests of graduate students—including master’s and Ph.D. students, teaching assistants, teaching associates, and research associates across the Main Campus and Medical Center.

GAGE was formed in November 2018 following an overwhelming vote among graduate students to unionize.

The university and GAGE have been engaged in contract negotiations since March 12. These negotiations marks the first time graduate students have engaged in collective bargaining with the administration since unionizing.

Jewel Lipps, a Ph.D. candidate in the Department of Biology and GAGE member, emphasized the importance of fair treatment for graduate workers in any future contract.

“We need our union contract to ensure that Georgetown truly meets the needs of all graduate workers, respects our circumstances and concerns, and values our contribution,” said Lipps said.

The platform is reminiscent of the university’s Jesuit values and focuses on the principles of transparency, health, remuneration, inclusion and equality, abbreviated in their pledge, petitions, and materials as “THRIVE.”

Among other goals, the union hopes that the contract will provide better worker compensation, dental and vision insurance, expanded healthcare coverage, and better quality insurance.

The aim of the negotiations is, according to GAGE’s pledge, to “promote health and security so that [GAGE] can focus on building vibrant intellectual communities through scholarship and service.”

The university reaffirmed its commitment to contract negotiations in a joint, campuswide, email statement between GAGE, the university, and the American Federation of Teachers (AFT) following the November election. AFT, a teacher’s union representing over 1.7 million members, is the parent organization of GAGE.

Negotiations are expected to continue into the summer and fall. 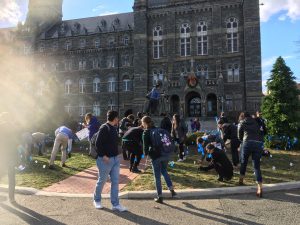