Carrying On: True Meditation in the Self-Help Era 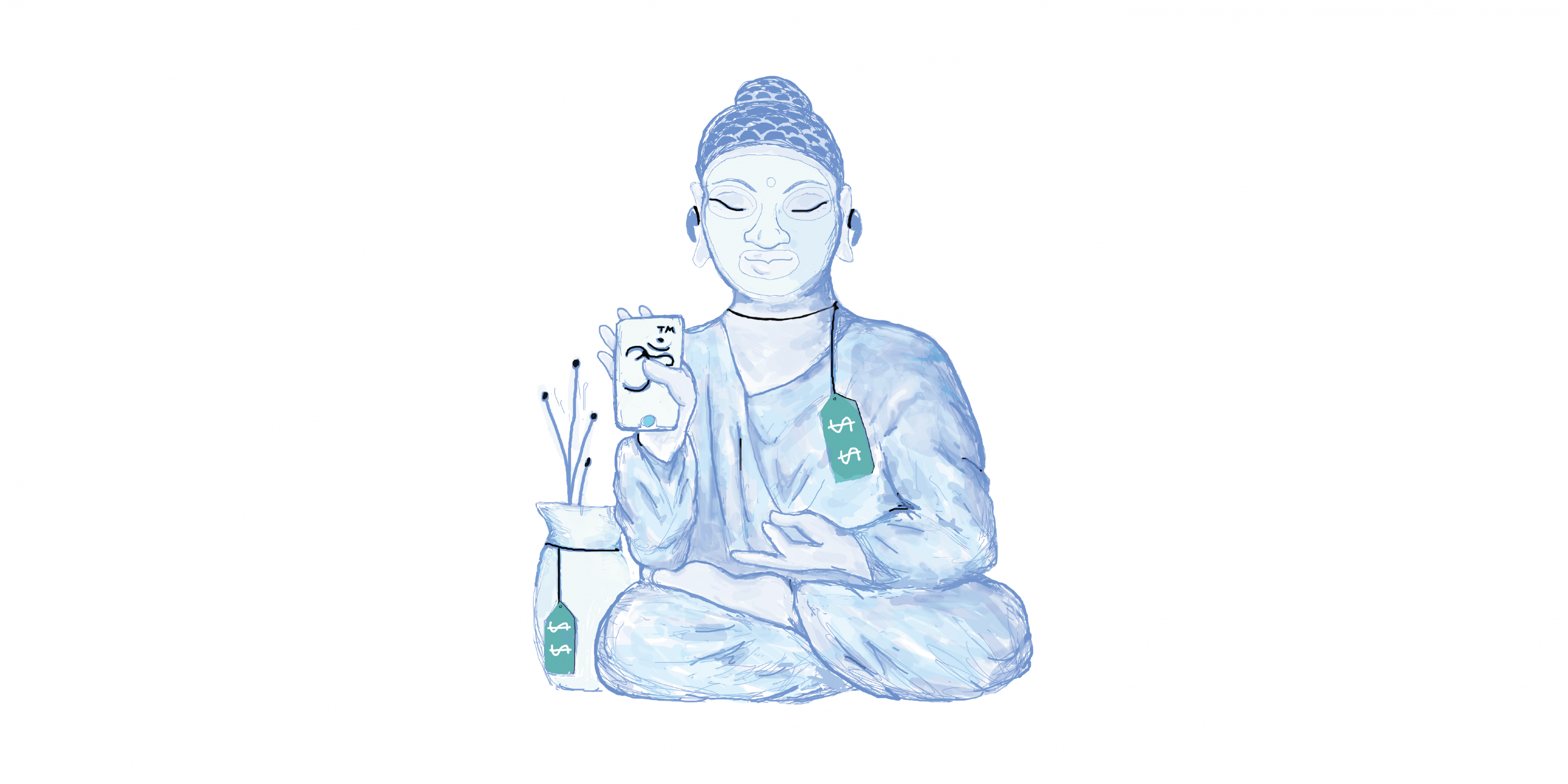 When I first started practicing Buddhism at age 11, I became the odd one out in my family of Catholics and atheists. Piles of sutras, Buddha images, and prayer beads crowded my room. I took a trip to see the Dalai Lama at Emory University during my sophomore year of high school, and I constructed a small altar on my childhood chest. While my parents often obliged me by driving me to the nearest Tibetan Buddhist center, the trip was an hour long one way, and more often than not I had to learn the tradition on my own with the books I managed to collect.

Many around me in South Carolina were baffled to discover that a kid would ever want to practice Buddhism. “After all,” one of my grandmothers would tell me, “there’s Christian meditation!” In the minds of others, it seemed, Buddhism was just meditation with baggage. But for me, there was no adequate substitute for the traditions that spawned and actively practice meditation.

The first time I tried to meditate, I had just watched a series of YouTube videos on “proper meditation techniques” and decided it was finally time to give this aspect of Buddhism a shot. These videos were short, visually rich, and had millions of views. The trick, they claimed, was to drive thoughts away while remaining completely mindful of yourself and your surroundings. But, more often than finding tranquility during meditation, random thoughts would creep into my head and I’d push them away, transfixed by the idea that the whole point was to achieve a total lack of distraction. In the process, I achieved nothing. Worse, my back began to hurt, tense from replicating the pictures I had seen online of meditators sitting stoically with perfect posture.

None of the countless apps or videos were able to help me, and I became frustrated and felt trapped inside my own mind. If I can’t figure out how to meditate on my own, I thought, how can I expect myself to continue down the Buddhist path? While the Buddhist books I had read changed my life and encouraged me to push on, true Buddhist practice seemed to be slipping my grasp.

It had never occurred to me that the apps and videos I was so reliant on were part of the problem. In recent years, Buddhist scholars such as Ronald Purser have deemed the ongoing appropriation of meditation “McMindfulness,” a shallow, egotistical means of commercializing a traditionally religious practice. For the self-help guru, McMindfulness is a way to profit off of people who are genuinely interested in meditation and may be going through mental or spiritual hardships. For corporations and universities, promoting meditation spaces without providing knowledgeable teachers can be a means of showing a commitment to mental health without actually doing anything. For Christian churches and organizations, meditation often serves as a trendy way to snap up younger converts, with thousands of books, websites, and Asian vacation packages.

The co-opting of meditation is nothing new: Since the counterculture movements of the 1960s, Christians and self-help gurus from the West have studied in Asian countries in an attempt to replicate the popularity of meditation in their own circles. John Main, the Roman Catholic priest for whom Georgetown’s meditation center is named, received “inspiration” for his brand of Christian meditation in the 1950s from a Malaysian Hindu sannyasin after multiple requests to be taught the practice. Now, Georgetown’s Buddhists, Hindus, and Sikhs practice meditation in a room that bears his name.

The end product of Main’s efforts was a Catholic meditation that focused solely on repeating prayers as mantras, ignoring the nuances and variations within the practice. In Buddhism alone, there are hundreds of different forms of meditation, and there are many more throughout other Dharmic faiths. Mindfulness meditation, the mantra of a spiritual era dominated by the concept of self-help, is a fairly recent addition to the practice by comparison.

As I would come to discover during workshops with Buddhist monks and nuns at my local Tibetan Center, meditation is not merely the silent contemplation that many Western self-help books make it out to be, nor is it practiced by all Buddhists. It certainly can’t be honed and perfected from YouTube videos or smartphone apps.

Some forms of traditional meditation focus on concentration, others serve as a means of active self-analysis, and others allow the meditator to visualize and meet the historical Buddha himself. It is hard to claim, therefore, that the ultimate goal of meditation is the total absence of thought. Through these guided Buddhist meditation sessions, I came to the important revelation that an educated teacher was essential to my practice of meditation. Receiving instructions from a Tibetan monk during the process of meditation, rather than memorizing the steps beforehand and trying on my own, was an incredible weight off of my shoulders.

After receiving the help of instructors, I began to notice a change in the way I approached meditation. I let my thoughts flow like a river, and long-held expectations no longer clouded my search for self-discovery. I learned ways to relax my muscles while sitting straight, and was finally able to appreciate meditation for what it was, the channeling of thought rather than its absence.

As I grew older and began college, I saw meditation becoming more common among my friends of all religious backgrounds. It seemed that everywhere I went, I found advertisements for college meditation sessions centered entirely around the idea of mindfulness and uprooted from the traditions that brought the practice into being.

This Western reproduction of meditation doesn’t merely serve as a form of cultural appropriation, it neglects the care taken by Dharmic teachers to guide their students through their meditative journeys. The end product is a form of diluted meditation whose results could be replicated by sitting in on a silent high school detention session. Additionally, for those who struggle with their mental health, this milquetoast copy of traditional meditation can be more dangerous than helpful, and cause its practitioners to dredge up past trauma. Why meditate in silence, many friends have asked me, when their thoughts are wells of deep pain? Indeed, unguided silence can be a catalyst for self-scrutiny and anxiety rather than an opportunity for mental growth. While Georgetown and the larger D.C. community does have organizations such as Dharmic Life that practice healthy, traditional meditation, it is all too easy to fall prey to shiny advertisements promising an end to all your troubles.

Meditation, like playing a guitar or oil painting, is a skill that can require months of practice before any noticeable results are achieved. For those spurred on by Western generalizations of meditation as easy and readily accessible, this reality can be discouraging. Yet, as I have learned throughout my journey of practicing meditation, acquiring the skill can be extremely beneficial to your worldview and well-being. Meditation grounds you in the present and allows you to analyze yourself and your problems as an outsider looking in rather than an individual subject to emotions and biases. More importantly, meditation allows you to realize your self-worth in a healthy, non-egotistical way while cultivating compassion for all those around you. So, for those who want to practice meditation, start with the traditions that invented and perfected it. Engage with Georgetown’s rich Dharmic faiths, and research the many religious organizations around D.C. As the Buddha says in the Dhammapada, “You yourself must strive. The Buddhas only point the way.”

[…] Carrying On: True Meditation in the Self-Help Era  The Georgetown Voice […]

Carrying On: True Meditation in the Self-Help Era – The Georgetown Voice – Self Success Tips

Carrying On: True Meditation in the Self-Help Era – The Georgetown Voice

[…] Carrying On: True Meditation in the Self-Help Era  The Georgetown Voice […]