Four guest speakers participated in the “Faith, Race, and Politics” public dialogue event hosted by the Georgetown Initiative on Catholic Social Thought and Public Life on Oct. 3 in Gaston Hall.

The event was a continuation of an ongoing series by the initiative called “Faith and the Faithful in U.S. Politics,” where religious leaders are invited to discuss the ways their faith informs and intersects with their political decision making. The panel included Religious News Service editor Adelle Banks, Bishop Daniel Flores, attorney and political strategist Justin Giboney, and Reverend Jim Wallis.

John Carr, founder and director of the initiative, introduced the topic of partisanship and how it related to the Parable of the Good Samaritan’s central question: “Who is my neighbor?”

Bishop Flores, whose diocese is located along the U.S.-Mexico border in Brownsville, Texas, answered by pointing to migrants fleeing violence and poverty.

“The neighbor is the one in need in front of us,” Flores said. “We’ll have to wait for the politicians to figure out how to solve this, in the meantime we have to face the face—the real face—of the person in front of you.”

Giboney took a different approach, calling the neighbor “the person who you would least like to have a political conversation with.” Political tribalism, he explained, leads people to dismiss the issues and concerns of those with whom they disagree.

“For me it could be…that unemployed Trump supporter from backlow America whose family is dealing with the opioid crisis,” Giboney said. “How do we respond to that particular person at that time?”

This was not the only time the discussion referenced the president. Associate director Kim Daniels opened the event by calling Donald Trump’s response to the 2017 white supremacist marches in Charlottesville, Virginia “equivocal and normalizing” before going on to criticize the administration’s immigration policies.

“Just yesterday we saw a report of the president suggesting that soldiers shoot migrants in the legs to slow them down as they attempted to cross our Southern border,” Daniels said.

Criticism extended to both major parties throughout the event. Reverend Wallis criticized the Democratic Party for being “reluctant to speak about faith,” while Giboney articulated his opposition to strict partisan loyalty. “If you agree with everything that conservatives say on every single issue or everything that progressives say on every single issue, I hate to tell you, you’re being very intellectually lazy,” he said. “The truth of the matter is you’re probably going to be more impactful when you’re correcting your side of the conversation sometimes than when you’re yelling at the other side who’s probably not even listening.” 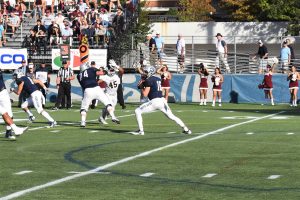