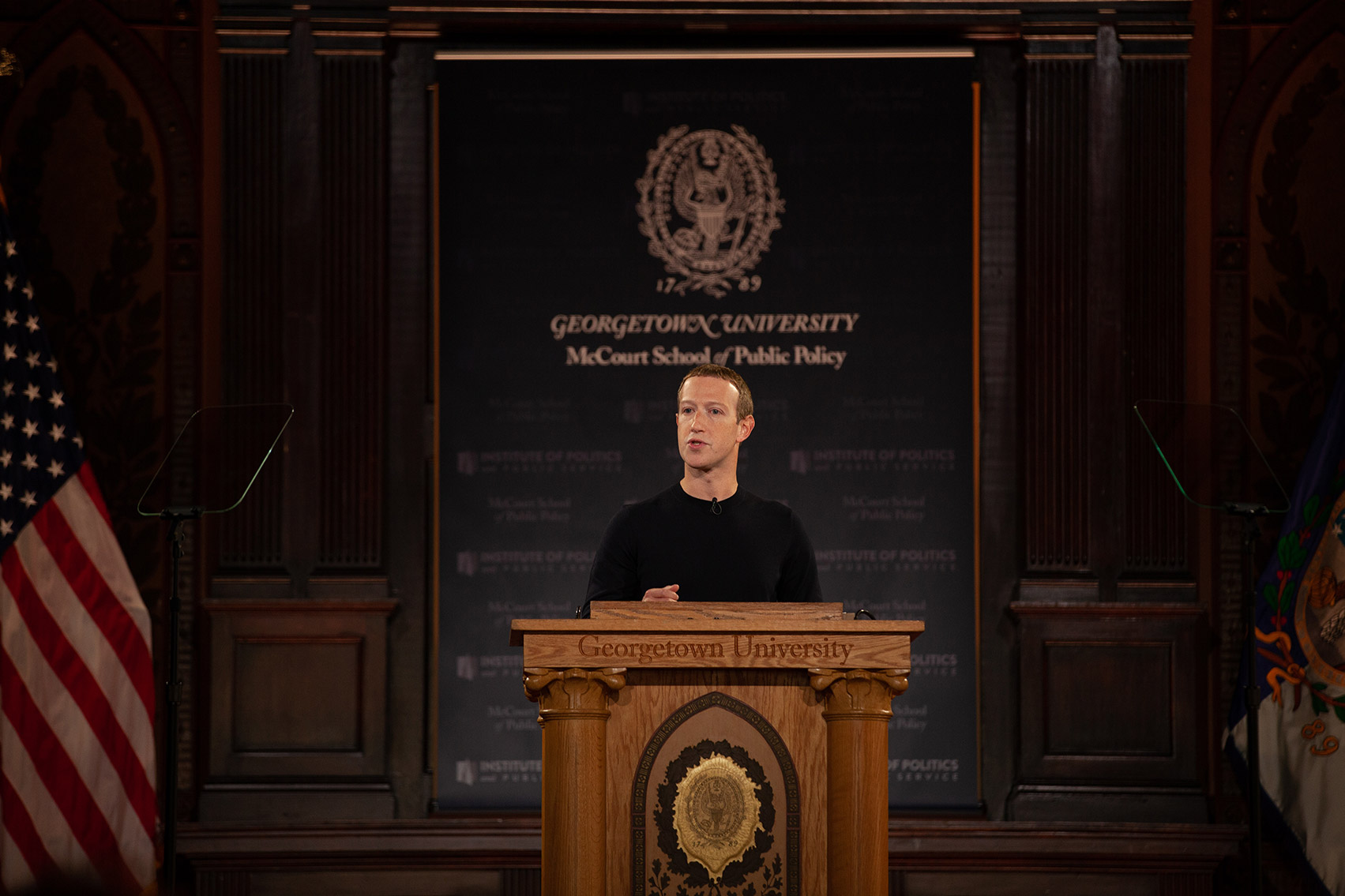 Facebook founder Mark Zuckerberg spoke and answered questions about free expression in Gaston Hall on Thursday. The event, titled “A Conversation on Free Expression,” began with a 35-minute speech articulating Zuckerberg’s perspective on the subject. Mo Elleithee (SFS ’94), who heads the Georgetown Institute of Politics and Public Service, which hosted the event, moderated the question-and-answer session that followed.

Throughout the event, Zuckerberg highlighted the importance of access to speech and expression. He said he believes his site has the potential to foster institutional change starting with the individual.

“It taught me that, while the world’s attention focuses on major events and institutions,” he said of his college years at Harvard University, “the bigger story is that most progress in our lives comes from regular people having more of a voice.” 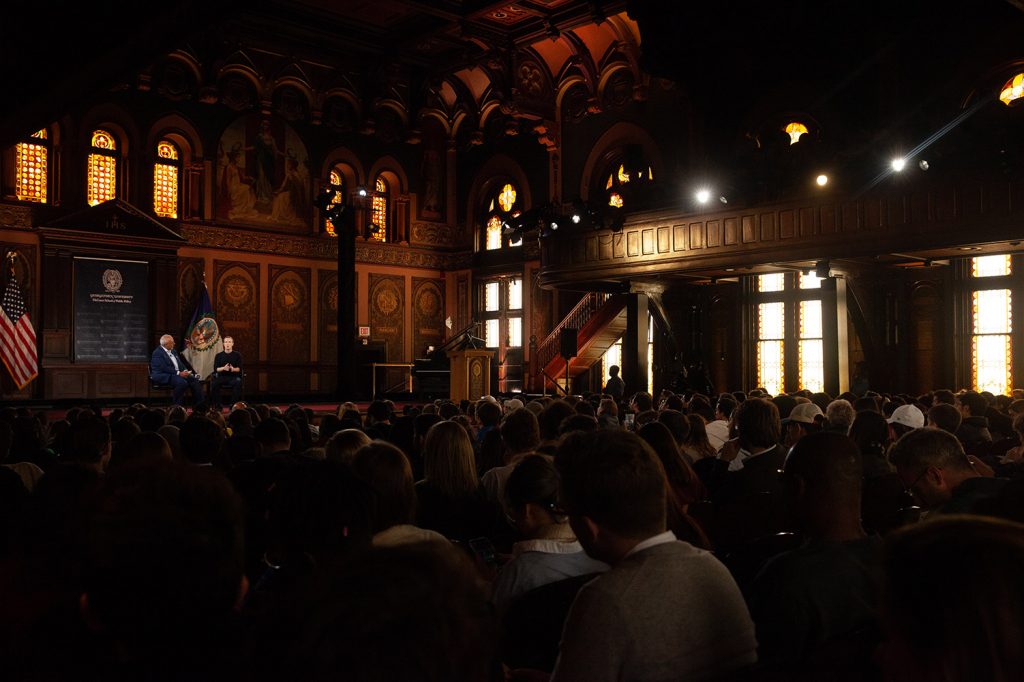 Gaston Hall was full for Zuckerberg’s speech. The line to get in stretched across Healy Hall inside, continued down the stairs, and then stretched the building’s length outside.

The event was only open to members of the university community, including students and faculty. By the time the auditorium’s doors opened around noon, the line stretched the length of Healy Hall, down the stairs, and outside, where broadcast news trucks waited to stream Zuckerberg’s speech.

Humberto Bravo (COL ’22), who arrived at arrived 7 a.m., was first in line. Bravo said he was excited to see Zuckerberg speak.

“He’s amazing. He created Facebook,” he said. “He’s a genius.” Sitting on the floor across from Bravo, Alex Castro (MSB ’22) said he arrived about 20 minutes later and was fourth in line.

“He may be controversial,” Casto said, “but at least he’s getting the conversation started. That’s why we’re here today.”

As students like Castro and Bravo waited, event staff handed out slips of paper and pencils so students and faculty could write down questions for Zuckerberg. The staffers collected the questions, which made their way to a committee of Georgetown community members who reviewed them, university spokesperson Meghan Dubyak wrote in an email to the Voice.

“Facebook representatives were not permitted to veto any questions or topics,” she wrote.

In another email, Elleithee said that the procedure is typical for Georgetown events featuring big names like Zuckerberg’s. He said that they have used similar procedures for Sen. Bernie Sanders and President Bill Clinton.

In a Wednesday Facebook post, the company’s founder wrote that his speech would be his clearest enunciation yet of how Facebook will reconcile free speech and its ill effects. 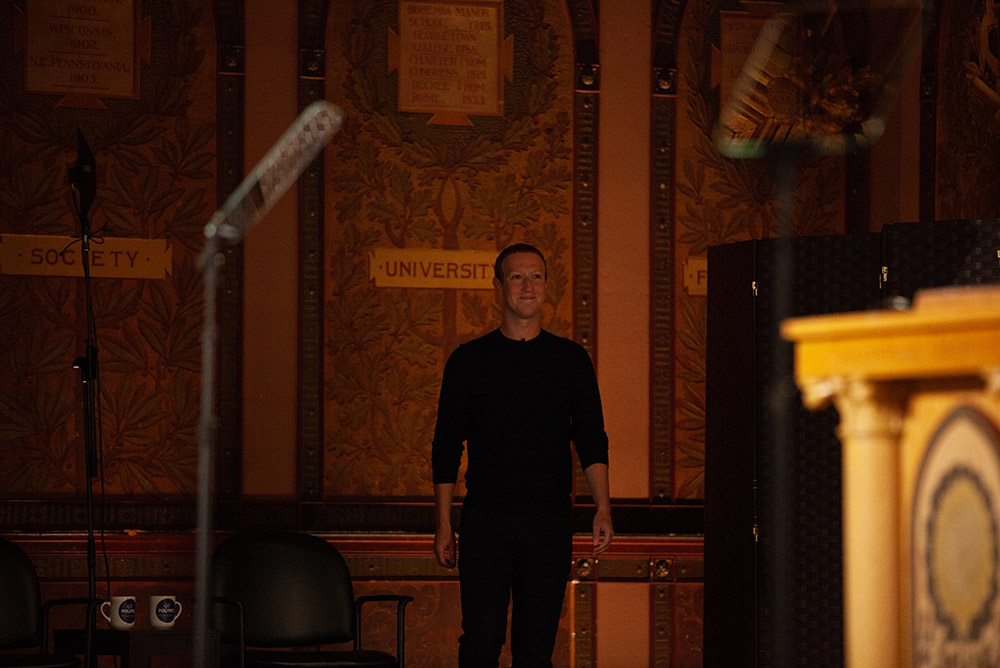 Zuckerberg waits as he is introduced. Zuckerberg spoke for 35 minutes about Facebook’s approach to free expression.

Critics of Facebook argue that it allows users to spread misinformation and hate too easily. During the run-up to the 2016 presidential election, Russian government agents used Facebook and other social media platforms as part of their effort to influence the outcome. Facebook’s platform has also been used to spark violence around the world, including in Myanmar and the Philippines, and has helped alter the results of other democratic elections.

In his speech, Zuckerberg defended Facebook’s policy of allowing controversial, even offensive, speech on the website. He appealed to icons of past civil rights movements to suggest that Facebook can host the kinds of individual communication that change politics and social norms.

“While the world’s attention focuses on major events and institutions,” he said, “the bigger story is that most progress in our lives comes from regular people having more of a voice.”

Elleithee began the conversation with a question about Facebook’s attempts to enter China.

He said that Facebook had tried to forge an agreement with China that would let the company operate without compromising its values.

“They never let us in,” Zuckerberg said. “And now we have more freedom to speak out and stand up for the values we believe in and fight for free expression around the world.”

But Zuckerberg said that his company should not be the final judge over what speech should be allowed online and what should be forced off. He proposed creating new institutions, such as an appeals process to handle disagreements when Facebook removes something from its website, to address that question.

Zuckerberg argued that free speech and social inclusion go together. “But there’s also a counter-trend,” he said. “In times of social turmoil, our impulse is often to pull back on free expression.”

The CEO ended his speech with a reference to his users, who number over 2 billion and speak more than 100 languages. Zuckerberg positioned his company as a forum for social change around the world, where individual users can make change—even, he said, if it takes going “two steps forward and one step back.”

Georgetown Should Commit to Ethical Data Use