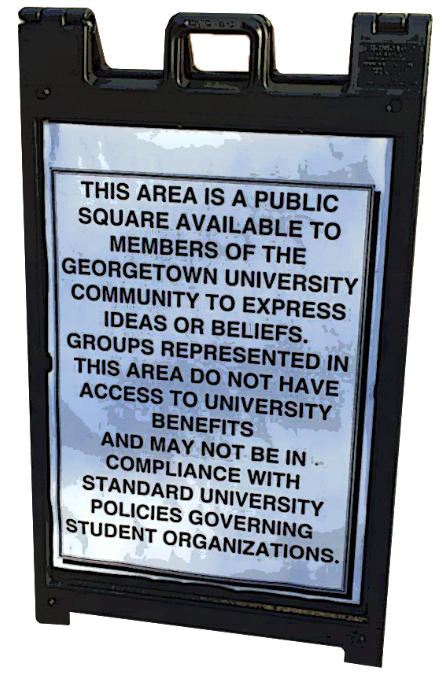 The law is blind, but it need not be mute. At the Georgetown University Law Center, however, students have found their expression of political speech blocked by the administration.

This past semester, an informal group of law students formed in support of Sen. Bernie Sanders’ bid for president. In September, their application to table in support of Sen. Sanders inside a Law Center building was denied. Then, in October, they set up a table with posters and fliers advocating for Sen. Sanders just outside the Law Center’s McDonough Hall. They were asked to leave by University staff after a short time.

In both cases, the Law Center argued that its status as a non-profit institution of higher learning prevents it from endorsing political candidates or allowing its resources to be used for this purpose. The Office of Student Life cited the Law Center’s “Student Organization Policy on Partisan Political Activities” in making its decision, a policy which includes a section reading, “candidate campaigning and solicitation, including transmission of campaign materials over the internet, leaflet distribution, and display of posters, is not allowed anywhere on Law Center property or using University servers or equipment.”

The group of Sanders supporters then appealed to the Foundation for Individual Rights in Education (FIRE). In an email to the Voice, a representative from FIRE wrote that the Law Center’s tax status “prohibits the school, not its students or student organizations, from participating in a campaign. Guidance from the IRS recognizes that students are not presumed to speak for their school when they campaign for a chosen candidate. A university does not have to put in place a ban on campaigning by students in order to protect its status as a tax-exempt organization.”

Regardless of the strength of the Law Center’s argument, the situation offers an easy remedy. This Editorial Board calls on the Georgetown University Law Center to establish a free-speech zone, similar to the one which exists on Red Square, that would guarantee its students space for political activism.

A free-speech zone would provide a long-term solution to the issue raised by the group of Sanders supporters while in no way threatening the Law Center’s tax status. Without it, we will likely see the continued clashing of the administration and politically-minded students, both during this election cycle and in the ones that follow. Considering the simplicity of the solution, it is time to address this issue. It would be a shame to see it left off the ballot. 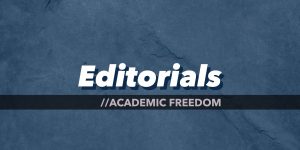 Academic Freedom Exists Past the Classroom

Red Square is not a “free speech zone.” It’s an area where tabling is allowed, which the Speech and Expression Policy calls a “public square.” The entire undergraduate campus is a “free speech zone,” and spontaneous protest is alllowed anywhere so long as it does not seriously impede egress. The issue at the Law School isn’t about tabling. It’s about being able to organize on behalf of a political candidate. Establishing a tabling area doesn’t solve the issue if the Law School doesn’t shape up and realize it doesn’t have any legal liability if students campaign on campus. Furthermore, establishing a small zone where political activity is allowed, as opposed to the entire campus, is a woefully inadequate half-measure.