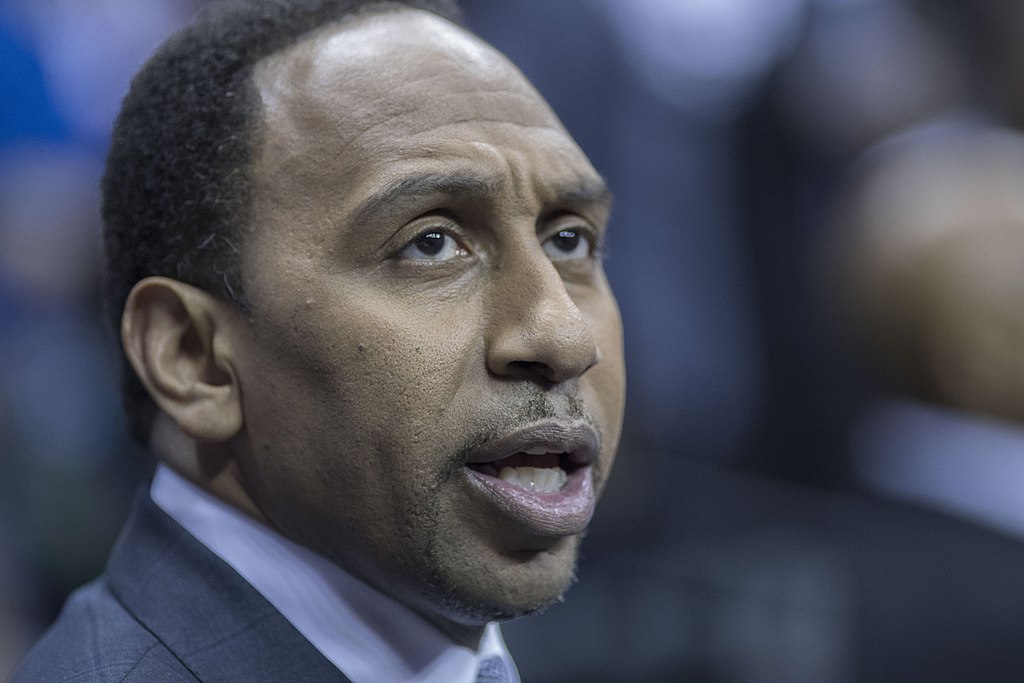 Stephen A. Smith is one of the most recognizable personalities in sports today. His rants are the stuff of legend, spawning countless memes on Twitter and Instagram. There are just so many priceless moments to choose from, which was the unenviable task that we had to undertake. Finding such moments were easy: we listed twelve in approximately twelve seconds. Ranking them was far more difficult (and this comes from two men well-versed in ranking things). After days of pondering and a fulfilling debate, here is the definitive ranking of Stephen A.’s top ten moments. Yes, both of us somehow are considered adults.

Nathan: We begin our list with an underrated yet hilarious moment found on Twitter. I’m going to be honest, I can’t remember what rant or what First Take segment this is from. But an underrated part of Stephen A.’s humor is his ability to change volume quickly to build drama, and the laughter really sticks out after that first “we don’t care”.

Eli: This clip is the correct reaction to someone saying that LeBron is the GOAT. Or that Ronaldo is better than Messi, or that Gunther Johnson is not a dual threat. There are so, so many bad sports takes on Twitter, and it’s nice to have a succinct comeback video to shut down their clownery.

Nathan: Everyone has a bad day and wishes they could yell into a microphone about it. But nobody can yell into a microphone quite like Stephen A. This is one of his finest solo performances, a long, anguished diatribe about the sad life of a Knicks fan. Getting the #3 pick in a draft with Zion Williamson will send any Knicks fan to a bad place, but it sends Stephen A. into the abyss for our viewing pleasure.

Eli: Any Knicks fan understands the pain that Stephen A. is going through in this clip—  the saddest New York franchise (and that’s really, really saying something) had just received the #3 draft pick, effectively guaranteeing that they would not receive Duke phenom Zion Williamson. When you’re a New York sports fan, you can use this clip every day.

8. Stephen A. stares out a window and Molly Qerim hugs him

Nathan: Continuing on the theme of the Knicks not catching a break, this iconic moment came after a devastating free agency period for the Knicks. Not only did they lose out on Kevin Durant and Kyrie Irving, they both went to a team 20 minutes down the road. What else is Stephen A. supposed to do? All he can do is process the trauma, something I’m sure Eli and other Knicks fans are all too familiar with.

Eli: Nathan is right, and as a D.C. sports fan surely can relate. As a Mets-Jets-Islanders fan, I’m used to rooting for the underdog in town. The one local Goliath I root for is the Knicks, mostly because the Nets weren’t even a New York team when I was growing up. I’ve seen Stephen A’s look in sports fans before. It’s the expression of a man who is preparing for years of bandwagon Nets fans as James Dolan and his shitty blues band continue to ruin this once-great franchise. Hey, at least we have Julius Randle.

Nathan: Most of these moments have much to do with basketball, so it’s refreshing to have some football commentary. It’s much more refreshing when Stephen A. trolls the Cowboys on national television, making fun of Darren Woodson and Will Cain. Again, this game wasn’t really all that memorable: the Titans played the Cowboys and something happened, I imagine. But Stephen A.’s strut onto the stage and his hilarious shirt just makes the moment so memorable and funny.

Eli: Nathan having a team in the World Series is an accident waiting to happen.

Nathan: We love the rare occurrence of happy Stephen A. A sports icon crossing over with a pop culture icon? Can’t ask for much more. This format is really popular on Twitter, and it really captures happiness in a bottle. Having a bad day? I guarantee that if you watch this clip of Stephen A., your mood will instantly improve. Those five seconds are absolutely hilarious and it’s crazy that this moment is so low.

Eli: This one goes out to my acquaintance Sky, an avid Beyonce fan (and fellow long-suffering Mets supporter victim). Usually, I say that covers fail to capture the emotion of the original song, but Stephen A. defies all conventions and improves upon the pop star’s mega-hit. I’d say that this is the perfect clip to sum up that winning feeling, but I don’t know what that feels like. Have I mentioned that I’m a New York sports fan?

5. Anything about Kwame Brown

Nathan: Don’t get me started on Kwame Brown. I’m not gon do that. Because I’ll lose my mind.

Eli: Don’t know who Kwame Brown is? If you’re a casual NBA fan, I can’t blame you— the center averaged a measly 6.6 points in his 14-year NBA tenure. “No offense,” says Stephen A, who, about 5 seconds later, is in full offense mode. “The man can’t play!” Anyone who’s seen me playing basketball (or baseball, or football, or cricket, and especially tennis) could say the same thing. #Relatable

4. Stephen A. stares blankly into space

Nathan: What a versatile format that is almost always funny. Lost your respect for someone and now they’re not a threat? This is the meme for you. Something bad happen to your sports team? Stephen A. knows. Russell Westbrook pump-faked from beyond 3? This is your answer. It’s all around social media now and we can even see it being used beyond sports. Stephen A. gained a new contingent of fans from this one image.

Eli: If you’re on Twitter (the two writers of this piece are borderline addicted to it, follow us @GUPepBand @GtownVoice) you’ve seen this meme and all its varieties (clown Stephen). It’s become the classic reply to sports #toughscenes— when the Mets blew a 6-run lead to the Nats (I was there, Nathan was there, it’s a personal trauma) it was peak sad Stephen time.

Nathan: It’s safe to say that Phil Jackson made for a much more successful coach than player. Signing Lamar Odom in 2004 was an excellent move for the Lakers. But 2014 is not 2004, and the Knicks paid for it the hard way. Nobody paid for it more than Stephen A.’s vocal chords, which have bore the brunt of twenty years of Knicks incompetence. Remember when earlier in the rant, he said he was gonna try to keep his composure? Pepperidge Farms remembers.

Eli: Who doesn’t love Phil Jackson? Me. And also Stephen A, apparently, as he flames the former Knicks GM for signing Lamar Odom, who was on… well, you get the point. You young New York fans think the Phil era was the worst thing that’s ever happened to this team. Let me educate you— Isiah Thomas was our coach (no, not that one). The Julius Randle era is a relative improvement.

2. “We have been hoodwinked, bamboozled, led astray, run amok, and flat-out DECEIVED!”

Nathan: The Phil Jackson era of management with the Knicks seems to be the high-water mark for these legendary Stephen A. rants. It also happens to be the low-water mark for the Knicks. It’s so funny that Stephen A. went ballistic about the one decision that the Knicks happened to get right in this era of basketball. But, who hasn’t been hoodwinked, bamboozled, led astray, run amok, or flat-out deceived in their lives? That’s why it’s so quotable and so memorable. And trust me, Eli and I experience this on a daily basis.

Eli: In researching this article, I found out that Stephen A. was actually paraphrasing another legend, Malcolm X. As Nathan said earlier, many of Stephen A’s best quotes are memorable for his delivery as much as his actual verbiage. His tones rises as he lists the Knicks faults, in this case for drafting Kristaps Porzingis (which, I will admit, turned out far better than he predicted). When Georgetown football lost a heartbreaker to Fordham because the refs forgot how to operate the play clock, Nathan and I turned to each other and chanted this in unison. With basketball season coming up (and given by personal experience watching Big East refs) it won’t be the last time this year either.

Nathan: If you’re reading this article, you probably knew this one was coming. It’s Stephen A.’s magnum opus: a solid take but delivered so memorably that you don’t even remember the take. Literally use it for any situation where you disagree with a take, and you’ll end their whole career. Of the things I reference among my roommates and within my various caucuses/cars, this is one I use the most to great comic effect.

Eli: We knew from the start that this was going to be #1— it was just a matter of choosing another 9. This expression perfectly encapsulates the essence of Stephen A. Smith: passionate, loud, and memorable, but also wise. It’s also a great gif to send your friend after they’ve shared an awful take (*ahem* looking at a certain sports editor from the other campus news source). My friend once told me that Stephen A. wasn’t a great sports analyst, and should be characterized more as an entertainer than a journalist. I had one message for him: stay OFF the WEEEEEEEEEEEEEEEEE……. Duh.

Wilt Chamberlain: The Behemoth of Basketball 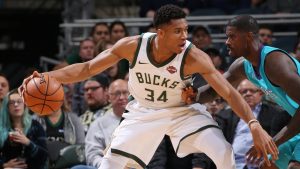