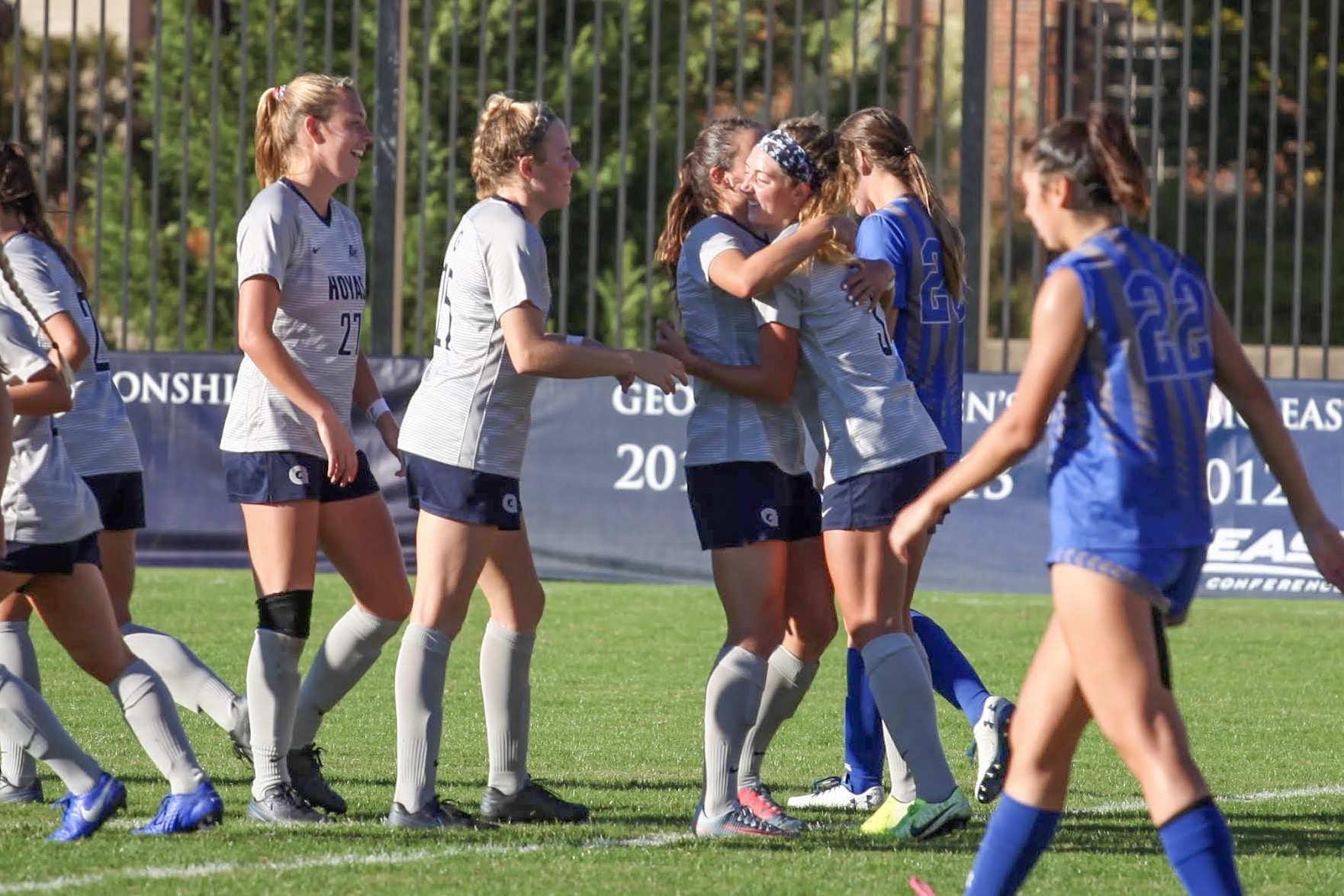 The Georgetown women’s soccer team overwhelmed Seton Hall 4-0 on Sunday afternoon, filling the net with a quartet of second-half strikes after a frustrating opening hour during which they could not break their two-game goal drought. Graduate student forward Amanda Carolan and junior forward Jenna Menta led the way for the Hoyas, recording a goal and an assist each. Before the match, meanwhile, the seven Hoyas that have been a part of the program’s historic recent seasons and will be graduating in the spring were honored on Senior Day.

It seemed to be a matter of when, not if, the Hoyas (11-3-3, 5-1-2 Big East) would score the opener in the early stages of the game. Junior defender Kelly Ann Livingstone’s bullet header off of a fifth minute corner was unlucky to be stopped by a net-front scrum, and two minutes later, Carolan’s foot ran over a squared ball from senior forward Paula Germino-Watnick in front of goal.

The Pirates (1-13-1, 0-8-0 Big East) settled down after an extremely nervous opening ten minutes, but continued to kick the ball out of play instead of attempting to gain possession. 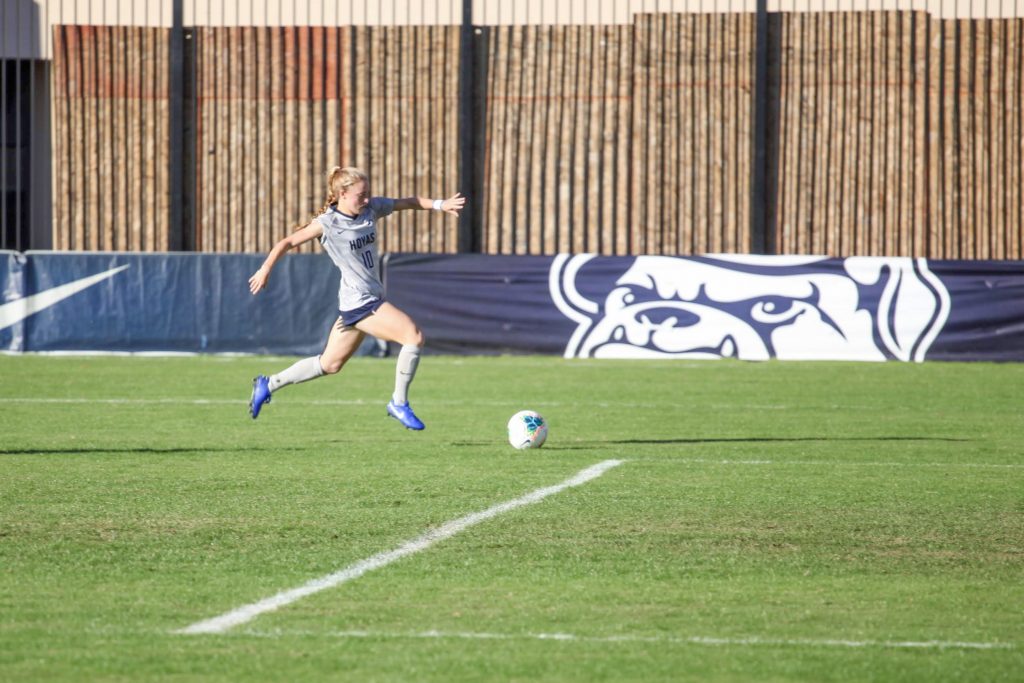 GU’s attacking virtuoso Germino-Watnick was a threat throughout.

The breakthrough seemed certain in the nineteenth minute, as Germino-Watnick opened up space for herself with a step-over and fired a left-footed shot on net. Her effort grazed the post, however, and Germino-Watnick was denied again by SHU freshman goalkeeper Harpa Johannsdottir seven minutes later after being played through by Carolan. Meanwhile, junior forward Jenna Menta’s follow-up lobbed effort had just too much weight and hit the top netting.

The relentlessly pressured Seton Hall defense never felt more comfortable as the first half wore on, but were able to marshal GU substitute freshman forwards Gia Vicari and Sofie Fox. The Pirates also made their first forays up the pitch, earning a corner in the 39th minute. Despite recording seven shots, five corners, and plenty of throw-ins from Menta into the box, the Hoyas entered the break still knotted at zero with their opponents.

“We try really hard to maintain our style because we know that’s the way we’re going to score,” Carolan remarked of the team’s attacking efforts. “As soon as we got into the locker room, we just said ‘We can’t stress out, it’s going to come.’”

Nolan began the second half with his starting eleven, and they immediately came within inches of ending the stalemate as Germino-Watnick drove a low ball into the six-yard box where Carolan was waiting. A tackle came in as Carolan was making contact, however, and Johansdottir was able to fight the ball away. Undeterred, the Hoyas continued to pile up chances, as both wingbacks went close. First, senior Casey Richards’ hard deflected effort went right at Johansdottir, before sophomore Jenna Royson crushed a Germino-Watnick cross just over the bar.

Carolan did well to get off a well-struck shot from a tight angle after expertly controlling a cross, drawing a corner. Then, in the 63rd minute, Germino-Watnick squandered perhaps the Hoyas’ best chance among many glorious ones to that point, shooting high and wide one-on-one with Johansdottir after being slid through by Richards. Quietly, the match looked like it could mark the Pirates’ first result of conference play and the Hoyas’ third straight game without a goal.

In the 67th minute, however, Carolan and Royson got the monkey off of Georgetown’s back. Protecting the ball in the Hoyas’ third against a swarm of blue, Carolan navigated left as Royson darted down the flank. Poking her through, the Hoyas’ leading scorer was the first one to congratulate Royson as she drove a left-footed shot into the far corner of the net.

GU looked visibly looser after Royson’s goal, and struck again just two minutes later. After re-entering as a sub after the first goal, Menta found room on the right wing to send in a low cross which Carolan headed on net with great pace, and the ball eluded Johansdottir. In the 80th minute, senior midfielder Carson Nizialek was able to sneak a through ball past the Pirates’ back line to Menta, who made no mistake, finishing low to Johansdottir’s left.

“Our finishing will need to better against St. John’s on Thursday,” Nolan pointed out. “But, all of the sudden, [after Royson’s opener] we can relax. And then we start the show a little bit more.” 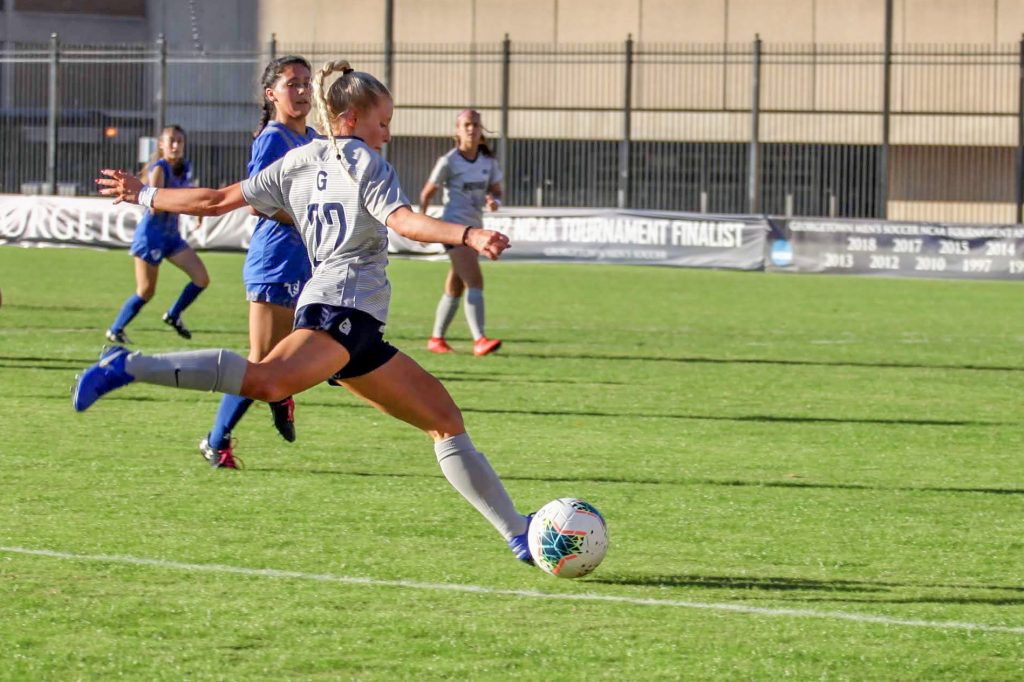 Nizialek almost scored her own goal to join Carolan and Menta’s goal-and-assist club, but her attempt from outside of the box hit the left post in the 84th minute. Seconds later, though, sophomore Caitlin Moon picked up the ball on the right wing and raced past the SHU defense, going against her momentum to score into the bottom right corner.

From there, Nolan gave his veterans including Germino-Watnick, Carolan, Richards and senior midfielder Sarah Trissel a moment to relish, subbing them off individually to Shaw Field’s applause. The aforementioned four players, plus Nizialek and senior defender Meaghan Nally, have been just about automatic starters this season and have been vital to the Hoyas’ massive achievements in the last four years.

“We’ve had unparalleled success [when they’ve been here],” Nolan said of the class. “Two final fours, three Big East Championships, and still a chance to do something this year.”

Carolan echoed her coach’s sentiment. “This class, since the moment they stepped on campus, has been a force to be reckoned with,” Carolan noted. “They’ve had great role models [that left] big shoes to fill, but they’ve definitely stepped into those roles and embraced them.”

Ahead for the Hoyas is a date with St. John’s (5-11-0, 2-5-0 Big East) at home on Thursday. The match is set to kick off at 2 p.m. ET with live stats available at guhoyas.com and a stream on the Big East Digital Network. After that, the Hoyas await their fate in the Big East Tournament, which they have won three years running, before NCAA Tournament play begins.

“One thing we try to emphasize is not resting on our laurels,” Carolan said. “Obviously we’re coming off of a huge season from last year…that doesn’t mean that anything is ours.”

Follow @GUVoiceSports on Twitter for live updates from the women’s soccer team and all fall sports at Georgetown. 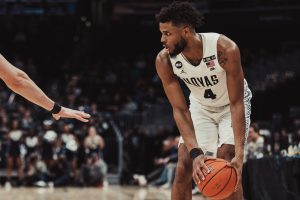 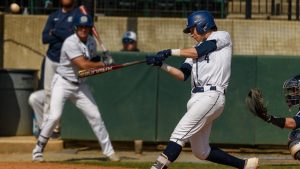 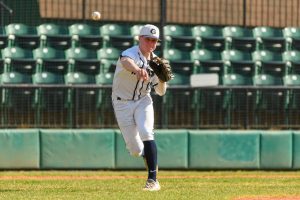