Home » By The Numbers » Voter Registration to be available through MyAccess 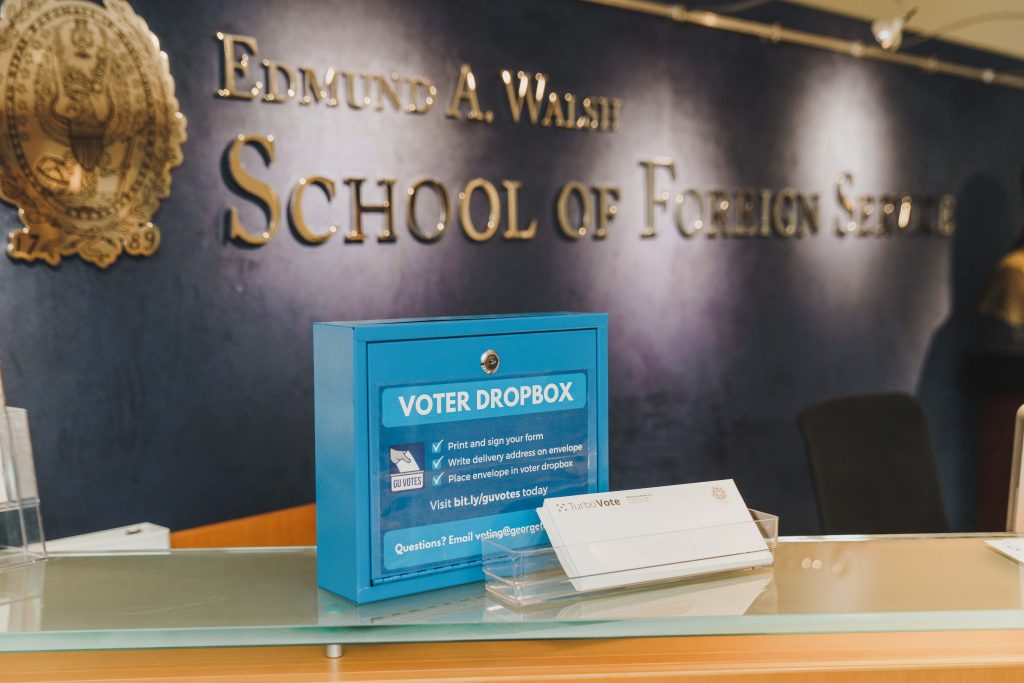 Georgetown students will soon be able to register to vote through the university’s MyAccess portal, the Institute of Politics and Public Service announced Monday. Within MyAccess, both undergraduate and graduate students can register to vote in the District or in their home state, request an absentee ballot, monitor their registration status, become informed about candidates, and subscribe to race updates.

This initiative was established by GU Votes, GU Politics, the Office of Federal Relations, and the University Registrar, and comes nearly a year before the 2020 presidential election.

Co-president of GU Votes Andrew Straky (COL ’20) views the university’s dedication to the project as a means to help bolster youth presence in politics. “Even in a time of such heightened interest in our political process, young voters continue to face several intentional and unintentional barriers to voting,” he said in a statement given to the Voice. “The MyAccess integration is a landmark step in ensuring that every Hoya who wants to vote is able to do so.” GU Votes, a student-run program under GU Politics, aims to engage students in the voting process. Leading up to the midterm elections in 2018, GU Votes reported that they helped around a quarter of the undergraduate student body register to vote and request absentee ballots. GU Politics stated that 6,448 Georgetown students voted in last year’s elections. In 2014, only 2,371 of students on campus voted. In fact, more Georgetown student-voters participated in the 2018 midterm election than during the 2012 presidential election.

Throughout the years, GU Votes has set up voter registration tables, sent out state-specific emails about elections, and created the Georgetown Voter Portal, which students can use to fill out voting forms, obtain stamps and submit them in designated drop boxes around campus.

Sarah Bryant (SFS ’22), a member of GU Votes leadership, stressed the ease the MyAccess system will offer students. “Now, registering to vote can be as natural as updating your address or phone number,” she said in a statement given to the Voice.

The Andrew Goodman Foundation (AGF) an organization that works with universities across the country to increase student civic participation, helps fund GU Votes at Georgetown. The AGF, founded in 1966, was created in honor of Andrew Goodman, a 20-year-old who was murdered by the Klu Klux Klan for registering black voters in Mississippi in 1964.

Straky explained that the AGF created and manages the university program. Once students click the MyAccess program, it connects to the AGF “my.VoteEverywhere” portal. The AGF, which currently works with 59 colleges and universities, first partnered with Georgetown in January 2018. Taryn Dwyer, the AGF’s program and fellowship manager, applauded the work of GU Votes and the efforts of the university in implementing this initiative. “When a group of student leaders are supported so strongly by their institution, we all win,” she wrote in a statement given to the Voice.

A 2017 Tufts University study found that 44.8 percent of voters between the ages of 18 and 21 participated in the 2016 election, compared to 40.7 percent in 2012. Despite this over four percent increase, it is still the lowest participating age group, with the 50 and older group voting at rates of 75.4 percent. The study also revealed that undergraduate seniors participated most, and graduate students voted more than undergraduates.

For Mo Elleithee (SFS ’94), executive director of GU Politics, the MyAccess program encompasses the vision of the Institute. “Part of the GU Politics mission is to encourage every student to participate in building the democracy they want to see,” he wrote in an email to the Voice.

According to Elleithee, this initiative will serve as an opportunity for student impact on the American political system. “We are really proud of our students for working with a wide range of stakeholders at Georgetown to help their classmates have a voice in the decisions of their nation and support our fragile democracy.”