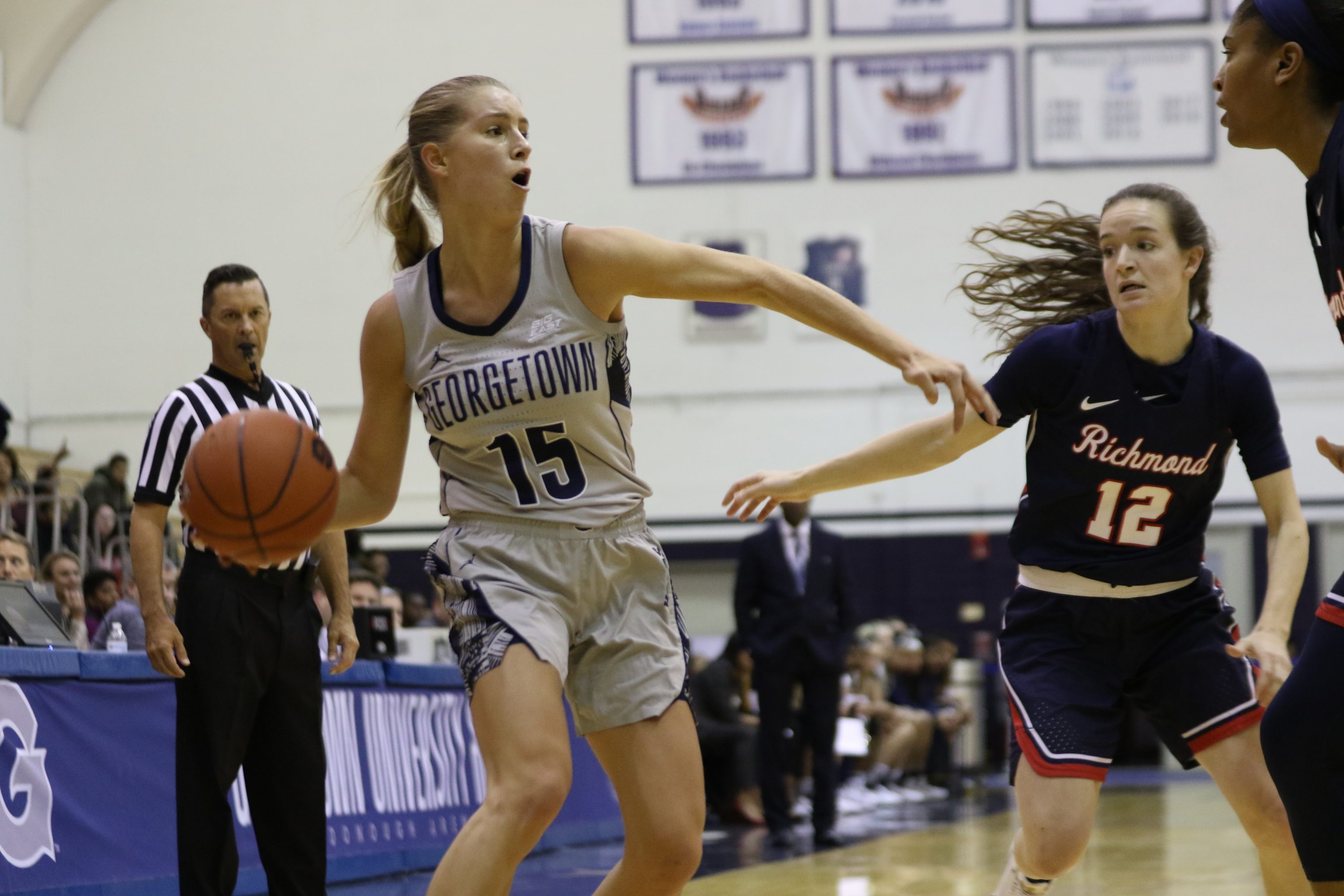 On Tuesday night, the Georgetown Hoyas women’s basketball team fell at McDonough Arena to the Richmond Spiders, 51-49. After the Hoyas (0-2, Big East) rushed out to a first quarter lead, Richmond (2-1, Atlantic-10) controlled the game in the second and third quarters. In the final period, the Hoyas were able to mount a comeback, tying the game in the final minute, but the Spiders escaped with the victory on two clutch free throws by junior guard Alex Parson. Sophomore guard Nikola Kovacikova was the Hoyas’ leader on offense, pouring in 15 points and grabbing five rebounds. Junior forward Tatiana Thompson also contributed 13 points. The Hoyas struggled from the field, shooting 19-61 (31.1%) from the field and 5-19 (26.3%) from deep.

Graduate student guard Taylor Barnes, who started and played 31 minutes in the season opener against Davidson, was out with an injury. 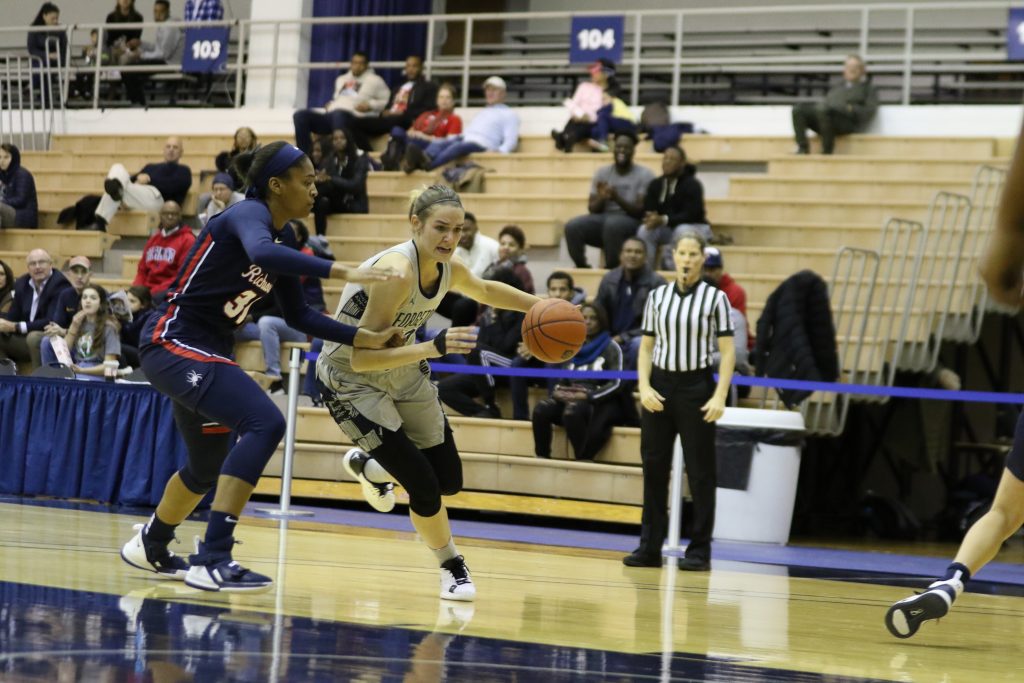 After Richmond won the opening tip, the two squads traded scores, with sophomore guard Aniyah Carpenter hitting a triple to start the scoring and senior forward Anita Kelava sinking a putback layup on the following possession. From there, a combination of solid defense by Richmond and sloppy ball-handling limited early scoring for the Hoyas. The two teams combined for five turnovers in the first five minutes, while Kelava and freshman forward Graceann Bennett each picked up a block.

Toward the end of the first quarter, the Hoyas began to heat up. To start an 11-3 run, Thompson and sophomore guard Cassandra Gordon each dropped in buckets from short-range. Then, Kovacikova, the Hoyas’ leading scorer in the season opener against Davidson, drilled two triples in less than a minute, allowing Georgetown to open up a 16-9 lead. The Spiders would close the gap to 18-15 before the end of the quarter, though, thanks to 3-pointers from sophomore guard Claire Holt and senior forward Jaide Hinds-Clarke.

Early in the second quarter, sophomore guard Kate Klimkiewicz hit a three to tie the game for the visitors, before Hinds-Clarke made a layup to give Richmond a two-point lead, forcing a timeout from Georgetown Head Coach James Howard. Out of the timeout, Bennett made a couple big plays to get the Hoyas going again. After receiving the ball down low, she grabbed the rebound off her own miss then put the ball back up for a successful layup, a gritty play for Georgetown’s first second quarter points. Then, on Richmond’s ensuing possession, Bennett made a block to prevent Richmond from retaking the lead. Scoring was sparse for the remainder of the half, as both teams experienced shooting struggles. Kovacikova was shaky from the charity stripe, where she hit just 3-of-6 attempts in the quarter. At the half, Richmond held a slim 27-25 advantage.

Kovacikova led all scorers at the half with 13 points on 4-9 shooting, and also had a game-high four rebounds.

Georgetown struggled out of the break, giving up a quick layup to Hinds-Clarke to start the half, and the Hoyas went two minutes without a bucket before Kovacikova sunk an inside layup. Both teams continued to struggle offensively, however, until late in the third quarter when Richmond began to open up their lead. Free throws by Klimkiewicz and Parson and a layup by Clark extended the lead to six, then a careless pass by Kelava ended in the hands of Klimkiewicz, who raced down the court to score a fastbreak layup and put the Spiders up by eight. Meanwhile, the Hoyas endured a stretch of 3:33 without a point. With less than a minute remaining in the period, sophomore guard Tayanna Jones drilled a three, giving the Hoyas hope, but Klimkiewicz responded with a 3-point play on the other end, quelling any Georgetown momentum to end the quarter as Richmond went into the fourth up 42-35. 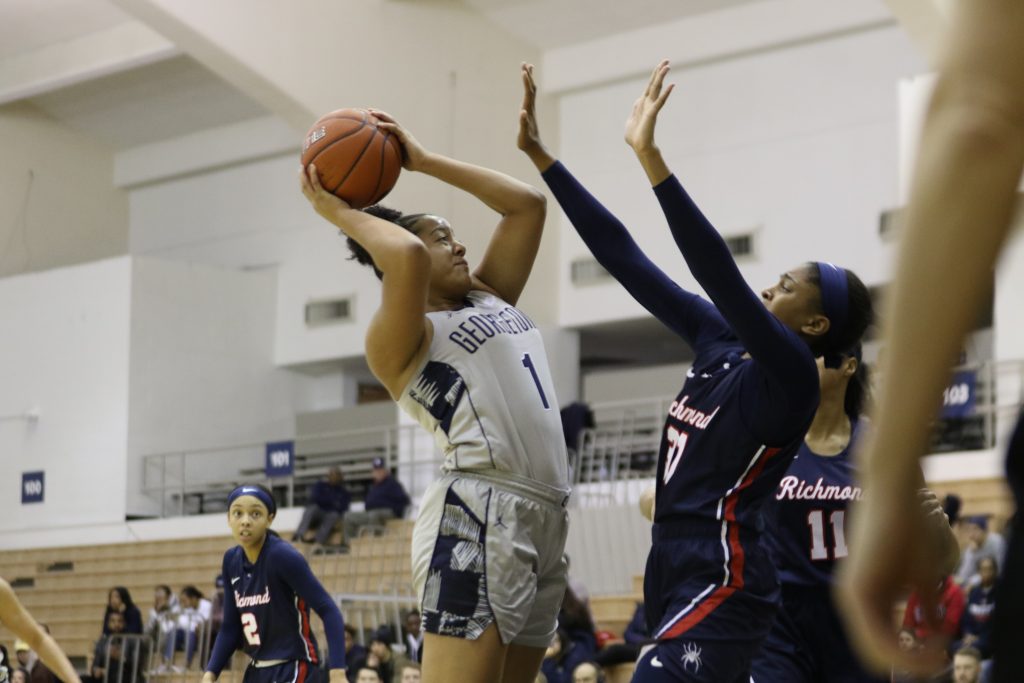 In the final period, the Hoyas started off much better, getting a three from Jones and a layup from Thompson in the first minute, cutting the deficit to two. From there, the teams would trade buckets through most of the quarter. The Spiders rode Hinds-Clarke, who provided seven points in the period, while the Hoyas got baskets from graduate student guard Brianna Jones, Kelava, and Thompson. With 46.8 remaining and the Spiders up 49-47, Coach Howard called a timeout, looking to set his team up for a late comeback. Thompson delivered out of the break, driving down the baseline and putting in a contested layup to knot the game at 49 with 30.8 seconds left. Unfortunately for the Hoyas, a comeback win wasn’t in the cards, as Parson was fouled driving to the basket and hit both free throw attempts. Kovacikova put up a last-second three on a good look, but it rimmed out.

Georgetown now looks forward to Saturday, when they travel north to take on Pittsburgh (1-1, ACC) at the Petersen Events Center. After dropping their season opener, the Panthers took down Central Connecticut State 81-73 on Monday. Tip-off is set for 1:00 p.m. ET, and a stream and live stats will be available on guhoyas.com. For continued coverage of women’s basketball, follow @GUVoiceSports on Twitter.