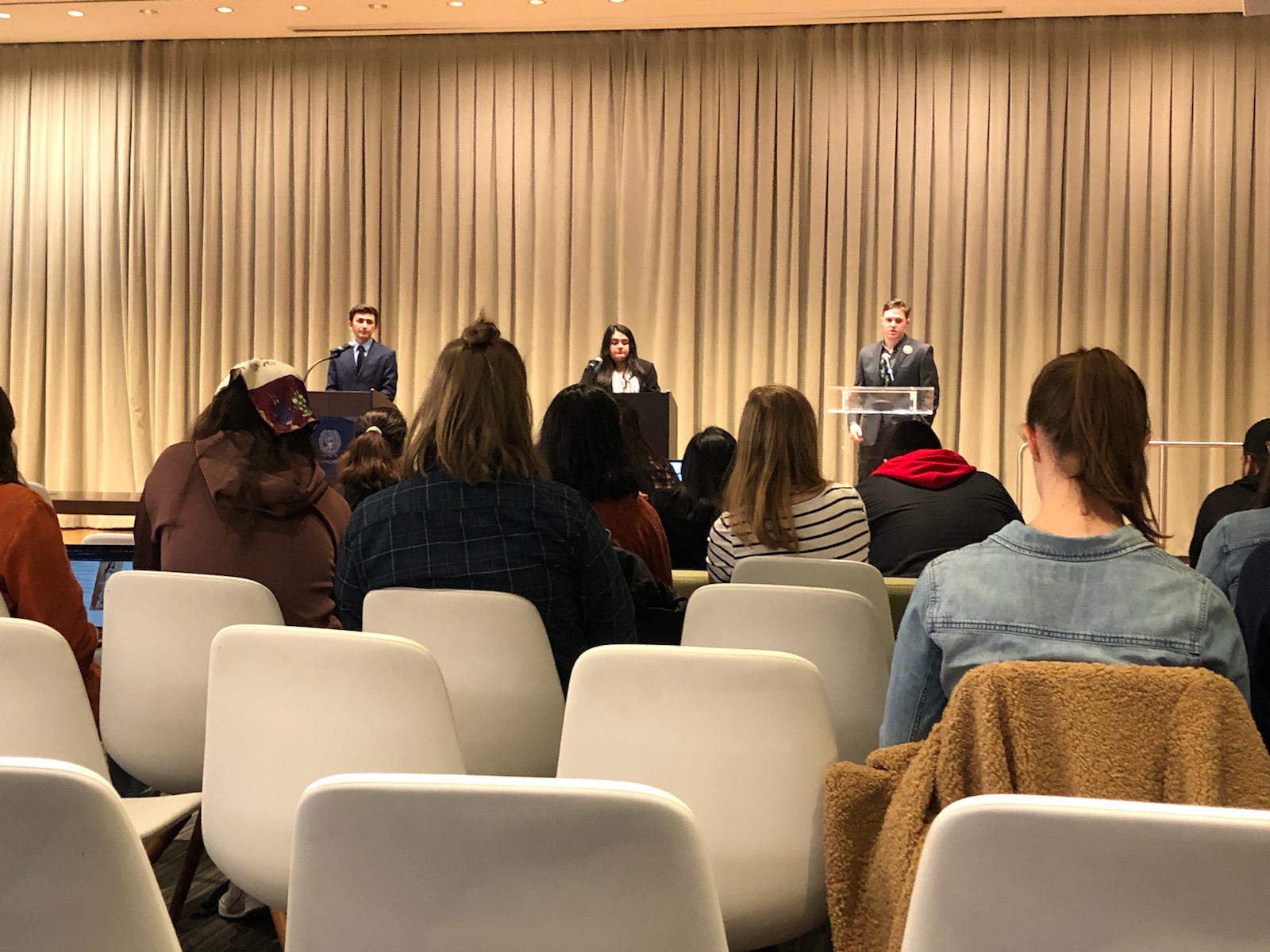 The race to lead Georgetown’s student government began on Jan. 22, with the declaration of Ferretti and running mate Bryce Badger (MSB ’21). In the following days, Gonzalez Porras and Anahi Figueroa-Flores (COL ’21), Marín-Mora and Isbel Deleon (COL ’21), and Julio Salmeron-Perla (SFS ’22) and Gabby Elliott Brault (SFS ’21) entered the race. Deleon, and the Salermon-Perla/Elliott Brault ticket have since dropped out.

The debate offered the first chance for the tickets to compare their platforms and compete for students’ votes. Each candidate stressed the importance of elevating student voices and including student activism in their policy goals. The three also spoke at length about proposed initiatives regarding sustainability, sexual assault prevention, mental health, diversity and inclusion.

Marín-Mora differentiated his campaign though his plan to expand access to mental health facilities, specifically through suggesting that a portion of The Corp’s profits and Student Activities Commission’s budget allotment go toward funding the off-campus mental health stipend. Ferretti highlighted his sustainability initiatives, including committing Georgetown to getting 50 percent of its energy from renewable sources. Gonzalez Porras emphasized her ability to advocate and her experience in activism to show how she would put pressure on the university to enact certain changes like implementing the 272 referendum.

An early talking point centered around prior GUSA experience. Ferretti is the current director of university affairs, and Marín-Mora is a current senator for the Class of 2020. Marín-Mora emphasized his sponsorship of the GUSA bill for the university’s Capital Bikeshare partnership, while Ferretti mentioned expanding vegetarian options on student meal plans.

Gonzalez Porras, who has never held an official position in GUSA, highlighted her work leading Hoyas for Immigrant Rights (HFIR) and collaborating with GUSA in measures to support undocumented students, including the recent walkout in support of DACA.

She tied this in to a question about which underrepresented groups candidates would like to integrate into GUSA. Gonzalez Porras emphasized her identity as an undocumented student and said she would like to elevate the voices of the more than 60 students and graduate students on campus.

“I’m going to use the community that I most identify with and those are my UndocuHoyas, especially this semester when the Supreme Court will be reaching a decision on whether or not [DACA] will be officially rescinded as a program or continue,” she said.

Marín-Mora also pointed to his identity, and said that as someone who is part of the Georgetown Scholarship Program and Community Scholars Program, he wanted to reach out to first-generation, low-income students, and implement campus-wide measures to increase support and accommodations for these students.

“For a lot of us coming to college for the first time, a lot of us come from disadvantaged communities already and we don’t know health literacy, we don’t know if it’s okay to go ask for accomodations in the classroom,” he said. “I think these are the voices that need to be heard in GUSA because those are the programs, those are the students that are disproportionately affected as well at this university.”

Referencing his current role in student government, Ferretti said he wanted to use his ticket’s institutional knowledge of GUSA to address and reduce the prevalence of sexual assault on campus, specifically by supporting survivors in the black community.

In terms of creating more diversity and inclusion in the GUSA Senate, Ferretti and Marín-Mora proposed recruiting initiatives. Ferretti mentioned making greater pushes at CAB Fair and Marín-Mora hoped to institute a peer-mentoring program for those interested in running. Gonzalez Porras said that she believed the representation in her campaign, comprised of women of color, would encourage others from more diverse backgrounds to get involved in GUSA.

Each candidate also affirmed their support for each of the three upcoming referenda on divesting from fossil fuels, designating the university as a Blue Campus, and establishing a fund using student activities fees for special projects, and expressed their dismay at the administration for not implementing the results of the 272 referendum.

When asked about the greatest challenge their GUSA administration would face, Marín-Mora addressed the lack of funding and resources available to GUSA. Ferretti and Gonzalez Porras both believed they would have to deal with complacency and reluctance from the university administration. Ferretti specifically wished that more administrators would be responsive to issues and initiatives regarding using students’ correct pronouns and limiting ableist language in classrooms.

Gonzalez Porras believes that the administration would underestimate her and Figueroa-Flores because of their identities as undocumented Latinas, but warned against them doing so: “By overlooking us, they’re going to forget that we have power and that we can mobilize students, that we can get them on the ground and push for things,” she said.

When students in the audience were invited to ask questions, Siena Hohne (COL ’22), the co-president of GUPride, asked candidates on how they would try to increase diversity within the GUSA Senate, and how they would recruit and work with a new LGBTQ policy team chair. Each candidate said they would undertake some form of outreach to recruit a new LGBTQ Policy Team chair. Ferretti mentioned contacting organizations like GUPride while Gonzalez Porras said she would engage with students she knew personally who may be interested in the position, and said she would consider eliminating procedures like a formal interview and application for the position.

For the last student question, Joey Brown (COL ’20), the facilitator of the Black Leadership Forum (BLF), stated that each candidate came from a community on campus that had been historically anti-black and asked them what they would do to increase trust and bridge the gap between the GUSA administration and the black community. Gonzalez Porras discussed addressing anti-blackness in HFIR, Marín-Mora discussed addressing anti-blackness in the Latinx community on campus, and Ferretti discussed measures to address implicit bias within GUPD. All three said that they had, and would continue to work with BLF to elevate student voices in the black community.

“I think that it’s really important that we don’t speak for these communities but rather give them the platforms they need achieve their goals and be better represented on this campus,” Ferretti said.

In their closing remarks, all three candidates emphasized wanting to increase student interest and involvement in GUSA by engaging with the activist community and elevating student voices.

“I want you to look around this room and see how many empty seats there are. It’s empty,” Gonzalez Porras said. “We need to make sure that we’re building relationships not just with the predominantly white students on this campus but also students of color, lower income, first generation students because we need to be in every room and topic of conversations. We cannot be invisible, we can’t be afraid anymore to speak our views and feel represented a part of this school.”

The GUSA election will take place on Feb. 6.