Using NHL General Managers’ Trading Preferences To Determine, Among Other Things, If Short Guys Really Are Cagier In Negotiations 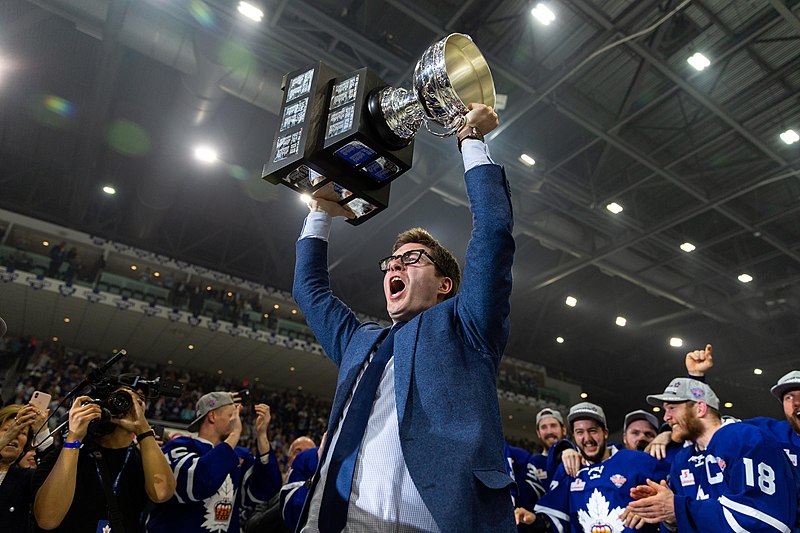 Complaining about a short, tyrannical schoolmaster, Paul Baumer, the protagonist of Erich Maria Remarque’s World War I classic All Quiet on the Western Front, remarks: “It is very queer that the unhappiness of the world is so often brought on by small men. They are so much more energetic and uncompromising than the big fellows.”

Well, being odd, convoluted things, my neurons laid the foundation for this article instead of directing me to Remarque’s following sentence and an eventual completion of my English reading assignment.

The little guys – catalysts of chaos? Unbending? I wanted to put Paul to the test in a way I would find novel and exciting. Recalling Craig Custance’s recent poll of NHL agents in which they anonymously name-dropped general managers that they found particularly fair or disagreeable, this piece seeks to engage with a few questions about the characteristics – height included – of the league’s now-32 chief personnel decision makers.

The metric used to quantify appetite for chaos and compromise was the number of trades per month a general manager had completed during his tenure, the same indicator Custance used in his 14-month old study on how often and when GMs liked to pull the trigger on deals. Certainly, it’s arbitrary for our purposes – these can manifest themselves in plenty of other ways, and it has been well-documented how narrow-minded Paul Fenton was regarding even the most minute of the Minnesota Wild’s hockey operations ahead of his July firing. But every GM’s performance is ultimately judged by the success and direction of his respective franchise, and the trades they decide to go for has a crucial hand in determining that.

So, are the short GMs tougher to do a deal with? Are they more likely to blow things up with a franchise-altering move? The NHL GM fraternity is also inhabited by a large number of older folks and former players relative to other professional sports leagues. What about those guys? I’ll dive into what I found in a regression analysis of these variables below.

Note that Kelly McCrimmon (Vegas), Julien BriseBois (Tampa Bay), and Bill Guerin (Minnesota) were omitted from the data set because they are relatively new on the job and don’t have enough of a track record to draw conclusions here. And of course, NHL Seattle GM Ron Francis doesn’t have any trades to his name yet. The quartet was included in my other calculations about the baseline demographics of NHL GMs.

A final disclaimer: not every general manager’s height is available online. That problem didn’t loom too large since so many of them have player pages with listed heights on the various hockey databases, but I had to get a little creative for a few folks. And yes, “creative” absolutely means going to Google Images and trying to find photos of those GMs standing next to others whose heights are listed. Scientific, I know. But pull up a few snaps and I’m guessing you’re in the ballpark. Estimates were listed, and on we forged.

The Relationship Between A GM’s Height and His Trading Preferences

Might as well cut to the chase, right? There is in fact a positive correlation between a GM’s height and the number of trades he completes. Unfortunately for our comedic pleasure and my Researcher of the Millennium hopes, it’s a very, very weak relationship. Keeping in mind that the average general manager completes 0.54 trades per month, an extra inch of height on an individual GM is associated with a miniscule 0.005 more trades completed per month. That extrapolates to 0.06 extra trades per year. Statistically speaking, 7-foot-2 Hoya basketball legend Roy Hibbert would be expected to make 1.68 more trades in a year than the 4-foot-10 Danny DeVito, which is not a small number, but if Hibbert and DeVito ever wind up as general managers, then the NHL has much larger problems (opportunities?) on its plate.

Aggressive and conservative GMs come in all shapes and sizes. The league’s shortest GM, the Oilers’ Ken Holland, is the second-stingiest on trades, and 5’10” Don Sweeney of the Bruins is third. Both men have generally refrained from earth-shattering deals. However, Stan Bowman and Don Waddell of the Blackhawks and Hurricanes, respectively, are both also 5’10” and definitely don’t mind shaking things up. The tall oaks among the GMs are just as much of a mixed bag. Remarque’s commentary, albeit in a totally repurposed context he never could have envisioned, doesn’t hold water. 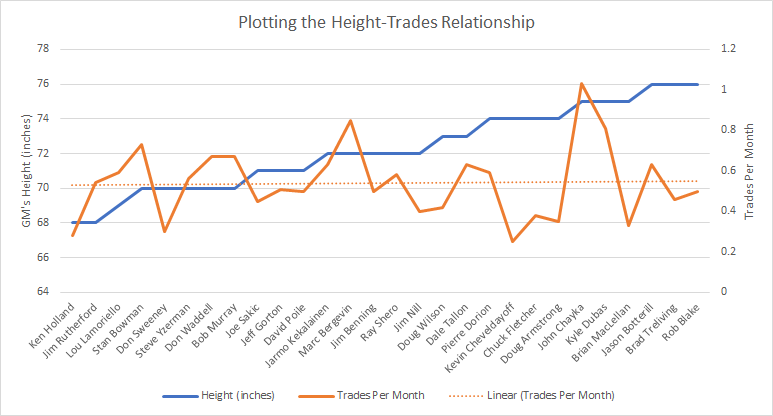 The Relationship Between A GM’s Age and His Trading Preferences

Here’s where things start to get a little interesting. Every year they age, the average GM is expected to complete 0.00661 fewer trades per month and 0.07932 fewer trades per year. Seems tiny again, right? Well, consider that the 32 GMs truly run the gamut of all ages of adult life. Four years ago, the Coyotes made history when they hired 26-year old John Chayka to be the youngest general manager in North American pro sports history. Today, Lou Lamoriello is still calling the shots for the New York Islanders at 77. There’s a 47 year difference between Chayka and Lamoriello. Including Lamoriello, there are five GMs in the league aged 65 or older. A 65-year old GM would be expected to make 1.59 fewer trades per year than a 45-year old GM, which isn’t nothing and shows the graybeards might just be a little less flexible in negotiations.

Also of note: I’ve tried to hold off on what interesting case studies the forever linked Kyle Dubas and Chayka are. Both men are the youngest GMs in the league by some margin at 34 and 30, respectively, and were marketed as the most ardent of disciples to the analytics revolution when they were hired. Dubas and Chayka are also two of the three most active GMs in making trades, with Chayka completing a whopping 1.03 trades per month on the job. That really magnifies what the general regression indicates. Removing Dubas and Chayka from the data set makes the relationship between increasing age and a decreasing preference to trade infinitesimal. Now, many of Dubas’ trades have been borne out of a need to wiggle the Maple Leafs’ payroll under the salary cap ceiling, but he’s shown a willingness to swap similar assets in so-called “hockey trades”. And what about Chayka? It’s evident that analytics-heavy franchises place different values on players than other more traditional operations. Both Dubas and Chayka also happen to be quite tall, but I think we’ll have to chalk up their willingness to deal to other factors. 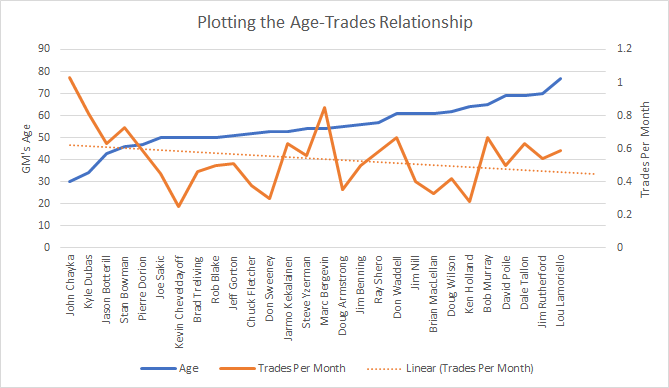 The Relationship Between NHL Experience and Trading

Eighteen (56.3%) of the league’s GMs are former NHL players themselves, which I have to believe is the highest rate in any of the major professional sports leagues. I’m not sure what that is attributable to, but certainly entry-level hockey operations gigs that could put college graduates on paths to GM-type jobs in the NFL and MLB, for example, are harder to find in the NHL’s more sparsely populated ops departments. In any case, it has led to a group of general managers that skews surprisingly old (only two GMs under 40, ten over 60) relative to other leagues. Notably, eight of those ten 60-plus GMs are former NHLers, which seems to suggest that GM searches a decade or two ago began and ended with candidates from NHL playing backgrounds.

GMs that don’t have NHL playing backgrounds completed slightly more trades (0.565 vs. 0.523) per month on the job than the former player GMs. Among the GMs that haven’t played in the show, you’ll notice a number of names that have a reputation for being fearless in swinging a big trade. David Poile and Doug Armstrong are conservative dealers overall but have swung blockbusters for the likes of PK Subban, Ryan Johansen, Ryan O’Reilly, and Brayden Schenn. Brad Treliving acquired and subsequently dealt Dougie Hamilton. Chayka, in addition to always tinkering, has brought in Phil Kessel and Taylor Hall over the last eight months in eyebrow-raisers.

There’s not as much variation in the trade frequencies of GMs with NHL playing experience, though the old guard certainly aren’t afraid to work the phones. Bob Murray and Dale Tallon jump off the page, and you can always count on Jim Rutherford putting the Penguins in the best place to make noise come playoffs like he did with Monday night’s acquisition of Jason Zucker. Conversely, Holland and Sweeney don’t usually deal as much.

For the record, in Custance’s agent poll, there was no consensus on who was particularly reasonable to deal with, though Anaheim’s Murray and St. Louis’ Armstrong were singled out as being quite inflexible in contract negotiations.

There are three current GMs who are Hall of Famers from their playing days: Steve Yzerman of the Red Wings, Joe Sakic with the Avalanche, and the Kings’ Rob Blake. All three are guiding the squads they suited up for the majority of their careers. Interestingly, the trio has been fairly conservative across the board in making massive trades as executives. Yzerman landed Ryan McDonagh for the Lightning and Sakic did ship out Ryan O’Reilly and Matt Duchene, but for men who have been calling the shots for quite some time, their records are on the thinner side.

To summarize, there’s really no difference in the trading habits of GMs based on height. There is a slight relationship between age and trading frequency, as younger GMs have tended to strike more deals than their older counterparts. The majority of general managers actually have NHL playing experience, and these GMs tend to deal fractionally less than the folks from different professional backgrounds. Overall, I think the more senior GMs that often have a decade-plus under their belts in decision-making roles aren’t afraid to swing for the fences, either. With the trade deadline fast approaching, maybe you’ll recall an insight from this piece when the wheeling and dealing begins (though probably not). Now back to All Quiet.