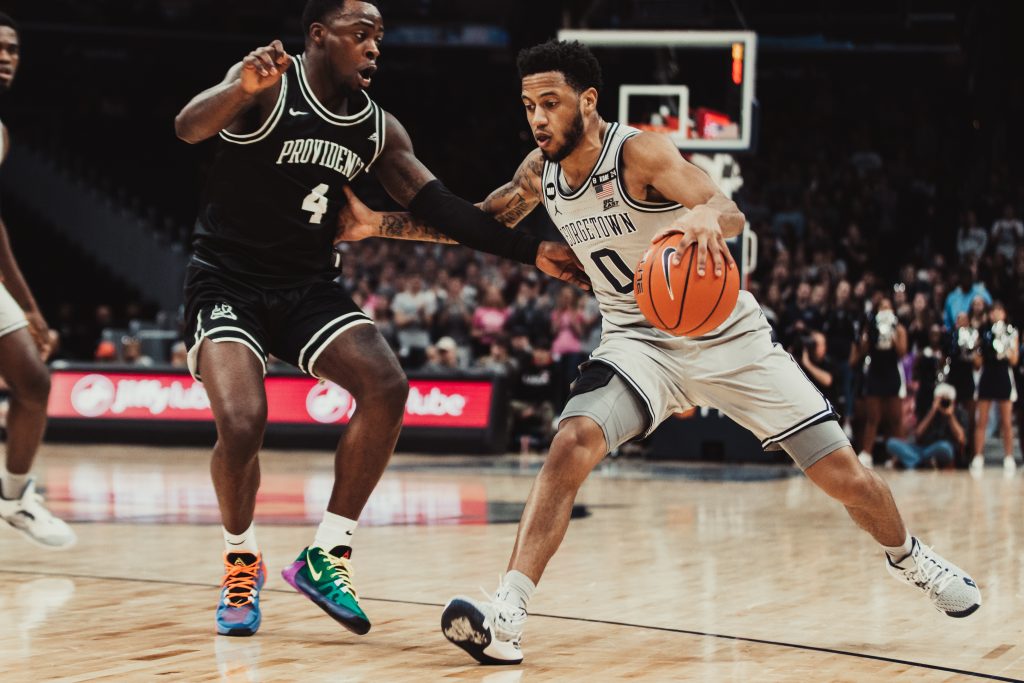 Men’s Basketball Falters in Second Half against Providence

The Georgetown Hoyas men’s basketball team (15-11, 5-8 Big East) fell apart in the second half to lose 73-63 to the Providence Friars (15-12, 8-6 Big East) on Wednesday. The Hoyas failed to keep the momentum after two consecutive victories, including one over No. 19 Butler. Junior guard Jahvon Blair scored a game-high 20 points for the Hoyas, and junior forward Jamorko Pickett contributed 12 points and 12 rebounds. Senior guard Alpha Diallo scored 18 to lead a balanced Friars attack.

In the squads’ last meeting against each other, the Friars defeated the Hoyas 76-60 in a lopsided matchup on Dec. 31. Sophomore guard Mac McClung missed that meeting with an eye injury, and would not have much say in this one either.

After missing three consecutive games due to injury, the Hoyas’ leading scorer entered the game midway through the first half to adoration from the crowd. However, McClung would play only eight minutes, scoring two points and going 0-for-3 from the field before exiting with injury.

After the game, Georgetown Head Coach Patrick Ewing said he wasn’t sure exactly what happened, but McClung felt sore and took himself out. When asked if this was the last time the Hoyas would have McClung on the floor this season, Ewing said, “I hope not. We need him on the floor.” The game story of the first half involved stretches of offensive ineptitude for both sides, as both teams’ defenses held the other in check. The Friars didn’t score until five minutes into the game, shooting 0-for-7; meanwhile, Georgetown opened up a seven-point lead. This would soon evaporate as the Hoyas could not find consistent offense. McClung was unable to spark the team in his limited minutes, and Ewing ended up playing freshman center Timothy Ighoefe 12 minutes in the first half due to foul trouble from starting freshman center Qudus Wahab.

The two teams heated up a little bit at the end of the half, and the Hoyas headed into halftime with a 34-30 lead thanks to 14 points from Blair. Pickett chipped in 8 points and 6 rebounds at the break. For Providence, Diallo had nine, going 3-for-10 from the field, while senior guard Maliek White contributed seven.

The second half started off similarly to the first with brief flashes of brilliance surrounded by overall incompetence. Both teams seemed stuck in a morass of a lack of cuts, turnovers, and shot clocks running out. Opposing coaches Patrick Ewing and Ed Cooley were both animated on the sidelines trying to inject some life into their teams.

Providence would answer the bell, going 7-for-9 from the field for a stretch, while the Hoyas started a long scoring drought. This allowed the Friars to open up a 59-51 lead, before a Ewing timeout. Soon after, Providence would commit their 7th foul, putting Georgetown into the bonus and letting the Hoyas back into it from the line, but it wouldn’t be enough.

The field goal drought would end up lasting for over 13 minutes before an Allen triple brought the Hoyas within seven. After a Blair layup, Duke was fouled on the inbound. He missed the first end of the one-and-one, yet the Hoyas couldn’t capitalize when Ighoefe allowed a key rebound to senior center Kalif Young. Ewing decided against bringing back in the starter Wahab and Ighoefe allowed another offensive rebound which allowed the Friars to put the game away, taking a 71-63 lead after two Pipkins free throws. Two more Diallo free throws would set the final score. In the press conference, Ewing pointed to his team’s energy levels in the second half. “To me, we just ran out of steam, ran out of energy, ran out of effort, all the things we had been doing great,” he said. “Those guys have been logging heavy minutes, and tonight it took its toll.”

The Hoyas undoubtedly missed Yurtseven on the offensive glass, surrendering 11 offensive rebounds while only picking up seven. Ewing did not give much of an update on Yurtseven’s status except to say that he hadn’t taken a step back from when he warmed up against Butler. Ewing said Yurtseven made the call not to play.

The bigger problem for the Hoyas involved the entire offense disappearing in the second half. Blair was almost invisible, and Pickett could not buy a field goal after the half. For long stretches of time, graduate transfer guard Terrell Allen was the only Hoya moving on offense, but even he eventually began forcing shots on the offensive end. The twin tower duo of Wahab and Ighoefe, despite being effective against Butler, were silent in this one. The duo’s minutes were fairly evenly split, as Wahab played 21 minutes, and Ighoefe played 19.

According to Ewing, Wahab’s performance mandated that he play the two near equal minutes. “Qudus didn’t bring the same energy, the same effort that he brought in previous games, Tim was doing a good job of post defense, so you got to make a change.”

The Hoyas return to action on Saturday at DePaul (13-12, 1-11 Big East). The game will tip off from Wintrust Arena at 9 p.m. ET. The game will be broadcast on Fox Sports 1 with live stats available at guhoyas.com. For continued coverage of all Georgetown sports, follow @GUVoiceSports on Twitter.

Roman Peregrino is the news editor and a sophomore in the College who is a lot less Italian than his name suggests.

Chris Distefano Brings Edgy Comedy to the Capital
The Political Punk: Riffs And Referendum—The Influence Of Classic Punk On Brexit