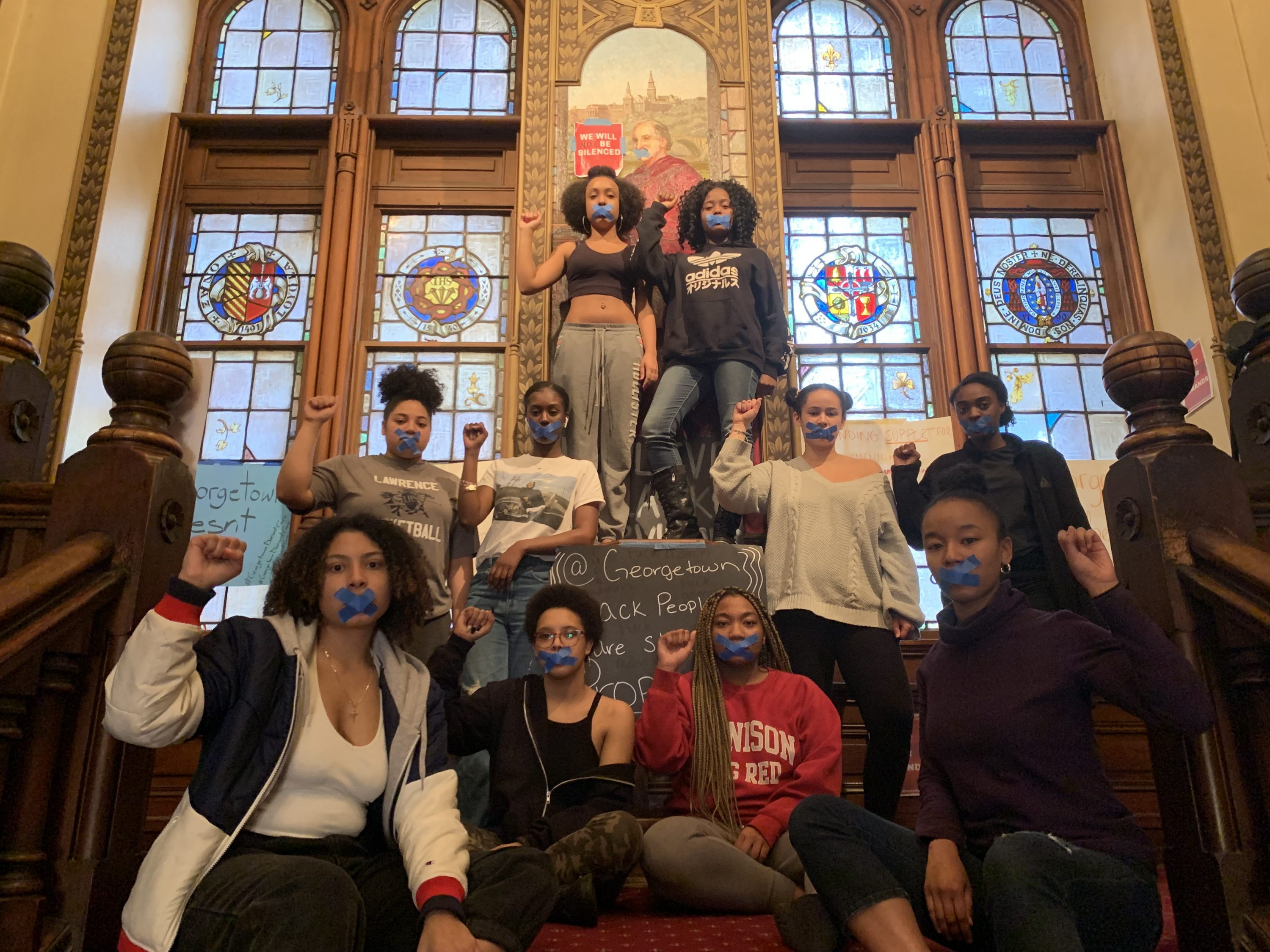 A panel of administrators met with students and members of the Black Survivors Coalition (BSC) on Feb. 28 to deliver concrete commitments based on the group’s demands. This meeting comes after five consecutive days of sit-ins that began Feb. 24.

After meeting with administration, coalition members expressed hope that the university was finally taking each of their demands seriously with detailed timelines for implementation. “The admin meeting was surprisingly productive. I think they are starting to respond to our demands, I really do. At least if I can take them by their word. I hope I can faithfully put that trust in them,” coalition member Makayla Jeffries (COL ’23) said.

Earlier in the week, the administration announced the hiring of Latasha Smith from Vassar College to serve as a black female-identifying clinician beginning at CAPS this fall. CAPS Director Phil Meilman announced to protestors on Feb. 27 that he had reached out to ten temporary clinicians of color to serve the Georgetown community until new CAPS hires begin this fall. He identified Renita Gabriel and Gabrielle Holder as two clinicians who have accepted temporary positions.

The third BSC demand asked Georgetown to increase resources for the Women’s Center to support survivors of sexual assault. Students requested that the university publish a job description for a newly created gender-based violence specialist position and that the posting be filled by the end of the academic year. The coalition also asked that women of color be hired to new positions in the Women’s Center and that students of color be present at interviews. Olson committed to announcing a specific timeline on April 1 and promised that a permanent gender-based violence specialist will work at least 30 hours a week, with an option of moving to 40 hours a week depending on need.

Next, BSC wanted to require comprehensive mandatory diversity, bias and bystander training for all deans, faculty, coaches, and Student Affairs staff. The coalition asked that attendance be taken at training sessions and made publicly available. Kilkenny answered positively, but acknowledged that the administration must update their previous training practices. The new program will include bystander training and require long-time faculty members to renew their training programs. Kilkenny committed to a plan to include more live training programs by the end of the semester.

Fifth, the coalition demanded the establishment of a Women’s and Gender Studies Department (WGST), including the necessary faculty and funding to be a full-time department. They also asked for a mandatory course to discuss sexual assault prevention, consent, and resources at Georgetown and in the DMV area. They provided the example of Title IX for a New Generation as a class that could help fill this role.

Celenza apologized to BSC leader Kayla Friedland (COL ’22) for the confrontational tone of their last meeting and committed to quickly hiring a director of the WGST program. He also committed to moving forward with a department once eight full-time, tenured instructors have committed to the program. Celenza agreed to open up more research opportunities for WGST professors pursuing tenure, though he declined to prioritize their applications over those of other faculty members. He also agreed to prioritize review of compensation and conditions of current professors. Celenza promised an update in the April 1 newsletter.

He committed to update the university community in December about potentially requiring a class that focuses on Title IX issues, and the five administrators agreed to state by Mar. 16 whether they would advocate for such a course. Administrators promised to discuss a first-year seminar on holistic wellness and report on their progress by May 8.

The sixth demand involved establishing comprehensive crisis response resources on campus, open 24/7 with a temporary housing program, and expanding CAPS hours of operation. After extended conversation, Olson said he understood the urgency, and will commit to working on the 24/7 trauma center with BSC members.

The coalition also demanded that Georgetown meet previous demands made by the S.T.O.P. Coalition, the predecessor of BSC which focused on hiring culturally competent black trauma specialists, hiring black staff members in the Title IX office, and requiring cultural competency and implicit bias training for GUPD.

The administration committed to cultural competency and training development. Olson committed to including black staff in conversations about future openings, and students will be allowed in administration meetings and hiring processes. A student board involved with GUPD training will be discussed by March 16, and a pool of potential members will be created by the end of April. Members of the BSC emphasized that the pool should start with Georgetown United Against Police Aggression and the BSC.

In terms of specific GUPD practices, the administration acknowledged the severity of potentially lost reports and wants to improve the system of reporting. Smulson suggested a potential third party hotline that could remove GUPD from this process. Finally, Smulson committed to releasing a list of GUPD officers and listing their training status by March 16.The eighth demand involved increasing SAPE funding and mandated that all executive boards of student clubs attend SAPE Bystander Training. Olson gave a simple yes to these demands and promised that SAPE coordinators would be paid for each session they facilitate.

The coalition also stressed the need for safe transportation improvements in their penultimate demand, including SafeRides, student guards, and SafeWalk. They demanded improved crisis training, shorter wait times, and increased vetting of chaperones. They also requested that SafeRide expand to provide rides to any campus-owned residence. Administrators committed to improved crisis training, increase the number of SafeRide vans, and review wait times by the end of May in order to ensure 10-15 minute wait times by August. In addition, Smulson promised to review Title IX allegations and refuse to employ anyone found in violation as a student guard orSafeRide driver. Finally, GUPD officers will be mandated to cover their uniforms if they are driving SafeRide vans, and  SafeRides will be available to any campus-owned residence.

BSC’s final demand is to establish an off-campus mental health stipend endowment. Olson promised that the existing fund would not run out this school year, as well as a $15,000 annual commitment as the administration looks for a donor to endow the program. He also committed to actively market the program and how to access it to the entire university community.

After five days of sitting in, protestors are pleased with the progress that has been made, but weary. “At the end of the day, this sit-in should not have had to happen for us to have communication with admin, for admin to have conversations with themselves, and for them to competently do their jobs,” Jeffries said.

“Nobody wants to be here. It is unfortunate we had to do this work. I am very tired. It has been very draining, but it also has been an amazing space to be in.”

Student activists believe the change comes as a result of their direct action.

“We did it. We are really on our way to completing all of the demands.”

While the BSC is optimistic about the results of this week’s negotiations, at the time of publication the sit-in has not officially been called off. Coalition members are waiting for a university-wide email from the administration the evening of Feb. 28 before ending the protest.

This story is ongoing and will be updated

Paul James and Max Zhang contributed to this report 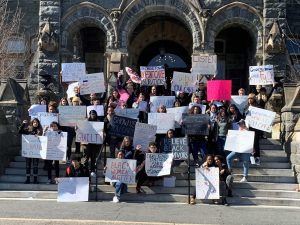 Thank you Georgetown Voice for your reporting on the BSC. The Hoya’s reporting has been wholly inadequate. It’s truly amazing what these students have accomplished. Even considering the university’s response to the demands remains unsatisfactory, the BSC has literally, within a span of 5 days, brought administrators from the highest levels of the university into a room to make a series of promises, and thus made a 230-year old institution straighten its posture and notions of respectability towards black victims and survivors of sexual assault — and without any huge donor backing them I should add. Let’s hope this is a turning point. God help us.