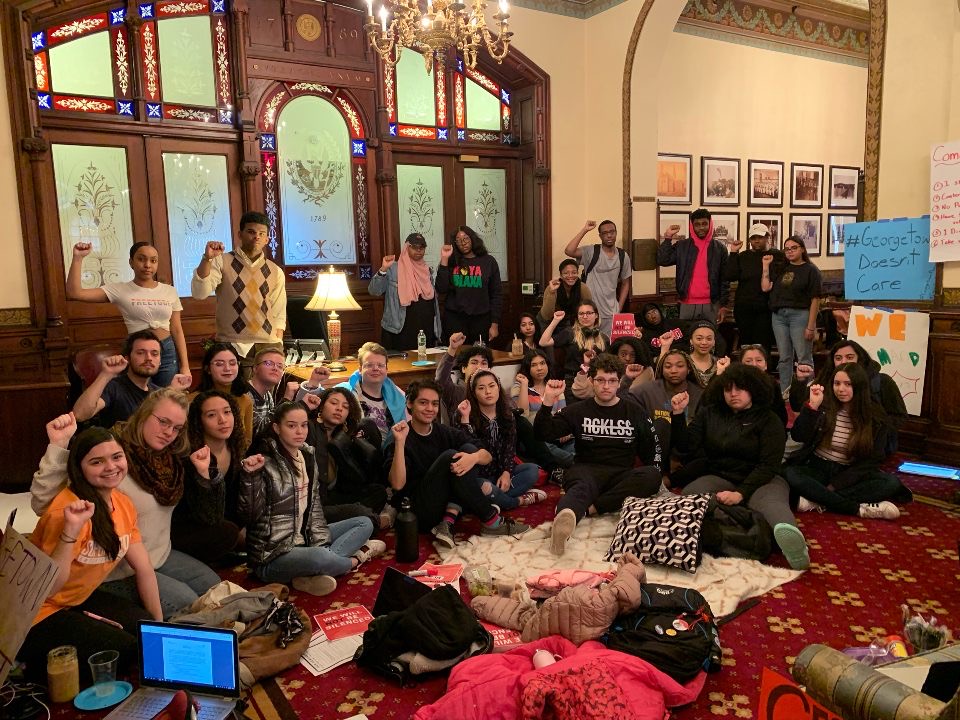 It is extraordinarily powerful to watch determined students demand their rights before senior members of the university administration. Members and supporters of the Black Survivors Coalition have been occupying Healy Hall since Feb. 24 to protest the university’s inadequate response to demands for improved sexual assault resources for black survivors. We support the students sitting in, and we encourage the administration to continue responding to the coalition’s demands with proactive steps and definitive timelines for improvements.

As the voices of marginalized students of color are often unheard on a majority-white campus, this movement draws distinct power by specifically centering black, femme, and non-binary survivors. Both the administration and the student body must listen to these voices, now raised in protest over days, weeks, and even years of unmet demands. Even individual students who do not agree with every concern raised by the advocacy group should support their right to peacefully protest for improved sexual assault response resources.

The coalition’s demands are not only reasonable but necessary minimums that the university should have implemented long ago. Not all the demands can be met immediately, but the administration must show respect to its student body through transparency in the process of improving our resources.

On Feb. 26 Rosemary Kilkenny, the university’s vice president for diversity, equity, and inclusion and chief diversity officer, and Vice President of Student Affairs Todd Olson sent the first university-wide email recognizing and responding to the coalition’s key demands. While this email is a start in increasing transparency, going forward, the university must publicly and routinely inform the student body of specific timelines and steps it is taking, including hiring processes, staff training updates, and mental health funding.

Some of the university responses, such as bringing in temporary clinicians before newly hired clinicians of color begin in the fall, are important victories for the protesters. The university has still failed, however, to respond substantially to many of the coalition’s demands.

The Black Survivors Coalition is the ideological successor of the STOP coalition, which began advocating for improved sexual assault resources during the 2018-2019 academic school year. After a lack of action by the university, the Black Survivors Coalition formed and delivered a letter titled #GeorgetownDoesntCare to President DeGioia’s office on Jan. 27 of this year with a list of 10 demands, the first being a public response from the university by Jan. 31.

But rather than a public response, the university privately emailed a statement explaining ongoing improvements to various leaders of black on-campus organizations without addressing the coalition’s demands. This inadequate and misdirected response led to protestors rallying in Red Square on Feb. 21 and the ongoing sit-in. The sit-in will continue from 9 a.m. to 12 a.m. every weekday until the administration responds adequately to the coalition’s demands.

Sexual assault is a major issue on Georgetown’s campus and at universities around the nation. In the latest Campus Climate Survey on Sexual Assault and Misconduct Report from February 2019, 31.6 percent of respondents reported sexual assault. This is above the Association of American Universities’ average rate of 25.9 percent. Over a quarter of those who reported assault said that their perpetrator was a Georgetown faculty member or professor.

“There is nothing radical, extreme, or partisan about the list of demands, nor are these demands anything new,” Maya James (COL ’20), a member of the coalition, wrote in an email to the Voice. “The coalition is simply asking for basic resources that students should not have to use their valuable time advocating for.”

One of the coalition’s demands is the establishment of a 24-hour crisis center for sexual assault. Sexual misconduct does not operate on a 9 to 5 schedule. But Georgetown’s Student Health Center closes by 5 p.m. on weekdays, 12 a.m. on Saturday, and is closed on Sunday. Health Education Services is open from 10 a.m. to 5 p.m. on weekdays and closes on weekends. Georgetown’s Counseling and Psychiatric Services (CAPS) is open from 9 a.m. to 5 p.m. on weekdays. Assault can occur at any time on campus, particularly during nighttime hours. Directing students to a national crisis hotline is not an acceptable alternative. Georgetown critically needs crisis-trained clinicians present 24-hours a day.

In response to this demand, the university responded that residential living and GUPD are on duty 24/7 to respond to student needs. This measure is not nearly enough. Many protesters have expressed major distrust of GUPD and do not believe that residential living staff members, such as RAs, are trained to handle sexual assault crises.

Additionally, the option to see CAPS and Health Education clinicians of color is necessary for students of color seeking their help after an assault. Students of color should feel comfortable with their clinicians. “The history of eugenics means that black people don’t trust people in power, especially people who hold power over our bodies,” Makayla Jeffries (COL ’23) said in an interview with the Voice.

At a meeting between students and administrators, Vice President of Student Affairs Todd Olson announced to the protesters that Latasha Smith, a black clinician from Vassar College, will begin at CAPS this fall. While we think this is a positive action by the administration, hiring one additional black clinician should only be the beginning of a recruitment campaign of many more clinicians of color.

The university email also committed to a $15,000 fund for undergraduates to seek mental health resources off-campus. Prior to the email, the university had already announced a $10,000 stipend. This new commitment only promises an added $5,000 dollars to the fund.

The average cost for therapy in D.C. is $150 per appointment. With $15,000, the university could fund approximately 100 appointments. According to outgoing GUSA President Norman Francis Jr. (COL ’20), the administration has not been transparent in the process of securing funding. Additionally, the funding is not substantial for students seeking long-term psychological services. “Students are having to go off-campus because our mental health resources are so bad. But people aren’t going to be going to therapy for five sessions, it is an ongoing thing,” Francis said in an interview with the Voice.

Another demand of the coalition involves comprehensive and mandatory Diversity, Bias, and Bystander training for all deans, faculty, coaches, and student affairs staff. While this would be a large undertaking for the administration, it is no new demand. Past activist groups, like the STOP coalition, have advocated for comprehensive training for all staff for years. Although training by itself cannot sufficiently prevent prejudice on campus, as students at the sit-in have voiced, current training standards for faculty and staff are failing to protect students from implicit biases.

We also support the coalition’s demand to increase funding for the Sexual Assault Peer Educators (SAPE). This funding would expand the program to enable all executive boards of student clubs to undergo mandatory SAPE bystander training or face financial penalties. However, we believe that training requirements must vary by organization. Larger clubs, clubs that host social events, and varsity athletic teams should be required to have a majority of their executive boards undergo mandatory SAPE training, above the level of the basic training now required of all incoming freshmen.

Requiring every member of every club’s board to complete training, however, does not account for the possibility that training may be triggering for survivors themselves, and there should be a lower completion threshold for smaller organizations that do not host social events before they lose funding. Georgetown’s student organizations play such a significant role in students’ lives that they may foster environments in which sexual assault and misconduct can occur. We must take proactive steps to ensure that club leaders are trained resources and can combat toxic social environments.

In response to some of the BSC’s other demands, Vice President Smulson announced that all Saferides drivers would be SAPE trained by the end of March, and a fourth van will begin operating on Mondays, Wednesdays, and Fridays. GUPD has also committed to improving online feedback forms, which contain links that do not currently work, to report assault and bias by GUPD officers by March 16. While it is unfortunate that drastic action is necessary to achieve these improvements, commitments by the administration speak to the strength of this movement.

None of the coalition’s demands are drastic requests. Rather, the coalition is advocating for improvements that are basic resources at other universities. While the implementation of these demands will not make the crisis of sexual misconduct go away entirely, they will establish bare minimum resources needed to treat the physical, mental, and emotional damage especially for Georgetown’s most vulnerable populations.