The Association of American Universities (AAU) released its aggregated results of the 2019 Campus Climate Survey (CCS) on Oct. 15. The report includes results from the survey that Georgetown administered in February. This was the second CCS that the university administered, and it was the first Georgetown survey conducted in conjunction with the 32 other schools in the AAU survey.

The survey revealed that trust in the administrations’ process has decreased. In 2016, 28.8 percent of undergraduate women believed that it is “very or extremely likely that campus officials would conduct a fair investigation.” This compares to 2019, where 20.6 percent expressed confidence in the university. The AAU average is 40 percent, nearly double Georgetown’s figure.

Metrics regarding bystander intervention have risen in the past 3 years. The percentage of students who reported being “very” or “extremely” knowledgeable about where to find resources in response to sexual assault at Georgetown rose from 24.5 percent three years ago, to 31.7 percent last year. Although an increase, this number is still lower than the 37.1 percent  AAU aggregate. 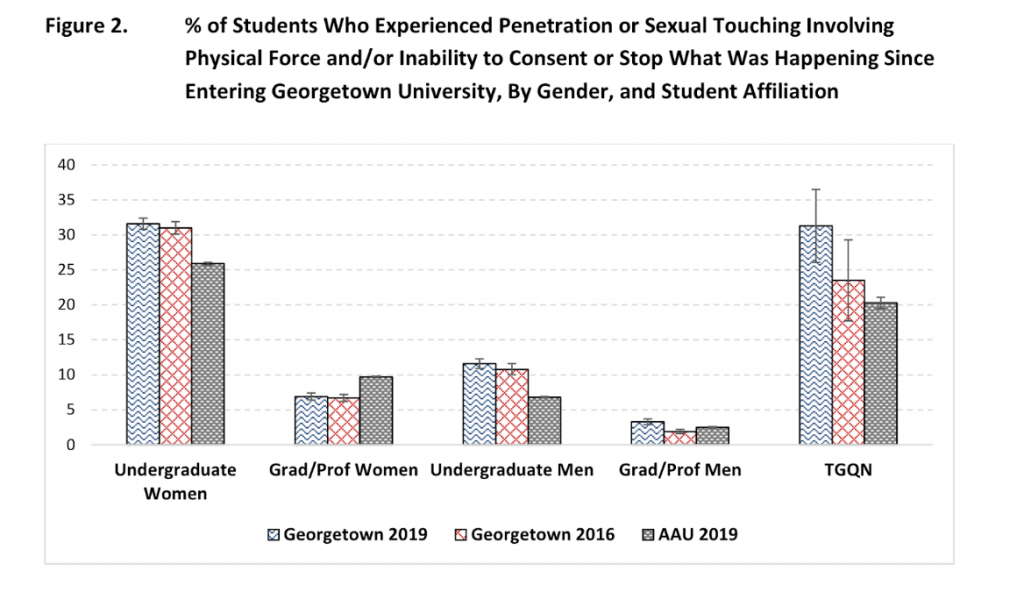 Courtesy of the Office of Assessment and Decision Support.

Of the women who reported experiencing “penetration which involves physical force or an inability to consent,” 28 percent reported the incident, up from 17.9 percent in 2016. The survey average was 29.7 percent.

University President John DeGioia sent the results in a campus-wide email, which included additional information from the university such as a presentation, and comparisons to the 2016 Campus Climate Survey beyond the data provided the AAU aggregate. 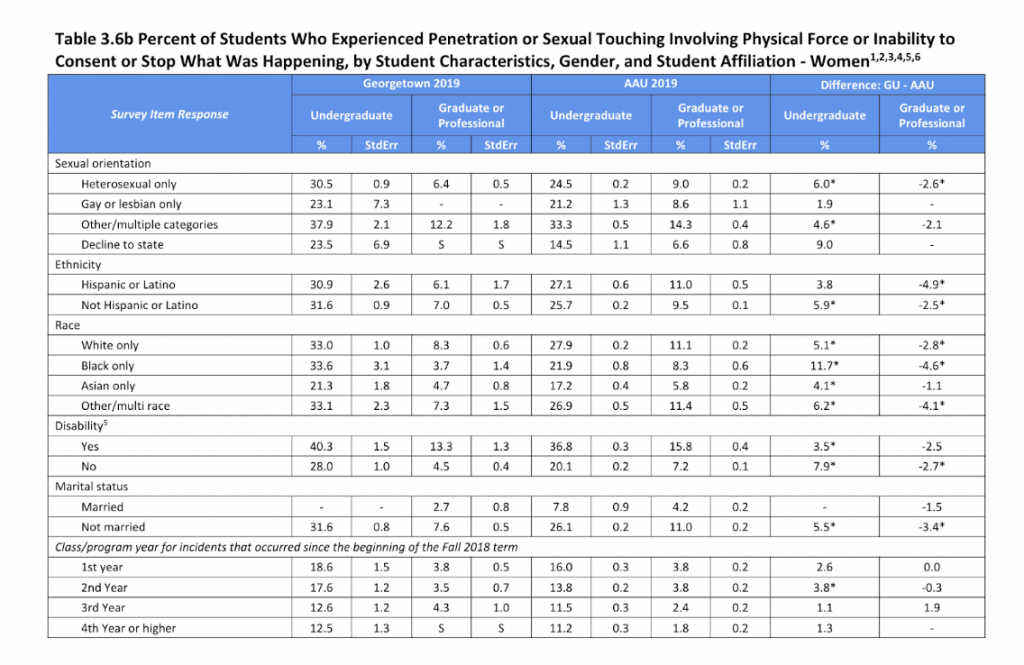 Table provided by the Office of Assessment and Decision Support.

In this email, DeGioia highlighted his desire to work with the campus LGBT community, writing, “we will have a particular focus on addressing the experiences of students of color; transgender, genderqueer or nonbinary (TGQN) students; and students with disabilities.”

Samantha Berner, who has served as the Title IX Office Coordinator since July 2019, said in a press meeting that there is “some really positive news: students are engaging in bystander intervention at higher rates.” The survey found that 53.1 percent of students said that they had checked in with someone who appeared to be “in a situation they believed could lead to a sexual assault.” The AAU aggregate was 50.3 percent.

In 2016, when asked whether students had “witnessed a drunk person headed for sexual encounter,” 77.1 percent of the student body reported not intervening.

Since the fall of 2017, all incoming students have undergone a five-hour, mandatory bystander training. By next Fall, the entire student body should have completed this training.

The university is also working to extend this training to its graduate students, some of which already implemented it, and other parts of the campus community, such as the graduate faculty. The CCS shows that 25.7 percent of sexual harassment experienced by graduate students originates from a faculty member or instructor.

One major result from the 2016 CCS and the subsequent task force was the formation of the Sexual Assault and Misconduct Advisory Committee as a temporary measure until a Critical Community Response Team (CCRT) could be formed. The CCRT is on track to be launched this year, as Dr. Vince WinklerPrins, the assistant vice president for Student Health and leader of the task force, should be recruiting members from the community stakeholders to be a part of the CCRT this fall. If completed, the program will start next spring.

Dr. WinklerPrins told the Voice in an email that the CCRT  will be made up of 40 or more people, of which 15 students, faculty, and staff will be the steering committee. The steering committee should start meeting in the next four weeks, and the CCRT should launch in Spring 2020.

“The CCRT will provide a multidisciplinary approach and consideration of issues around sexual assault and sexual misconduct,” wrote Dr. WinklerPrins. “The CCRT model also relies on institutional assessment data to strengthen its understanding and help frame its work for the campus community, so the climate surveys will be one source of information reviewed by the full group as it develops priorities for their agenda.”

The university has updates on the 11 recommendations, set by the 2016 task force, released on its website. The university has no current plans to form a new task force with recommendations, according to Berner, as they will be focusing on continuing the initiatives that are already in progress. This could change as a result of the listening sessions, put on by the university, that will be held in the coming weeks. These listening sessions are open to undergraduate students, and they will take place on Oct. 21 and Oct. 29 in the Healey Family Student Center and the Leavey Program Room, respectively.

“We want to make sure that before we decide exactly how we are moving forward, that we’re hearing from our community and our students,” said Samantha Berner. “That way the steps we take are well-informed and will hopefully speak to some of the issues that we have identified. And also we want to build on a lot of the successes we’ve had since our 2016 Survey.”

Courtesy of the Office of Assessment and Decision Support found here.