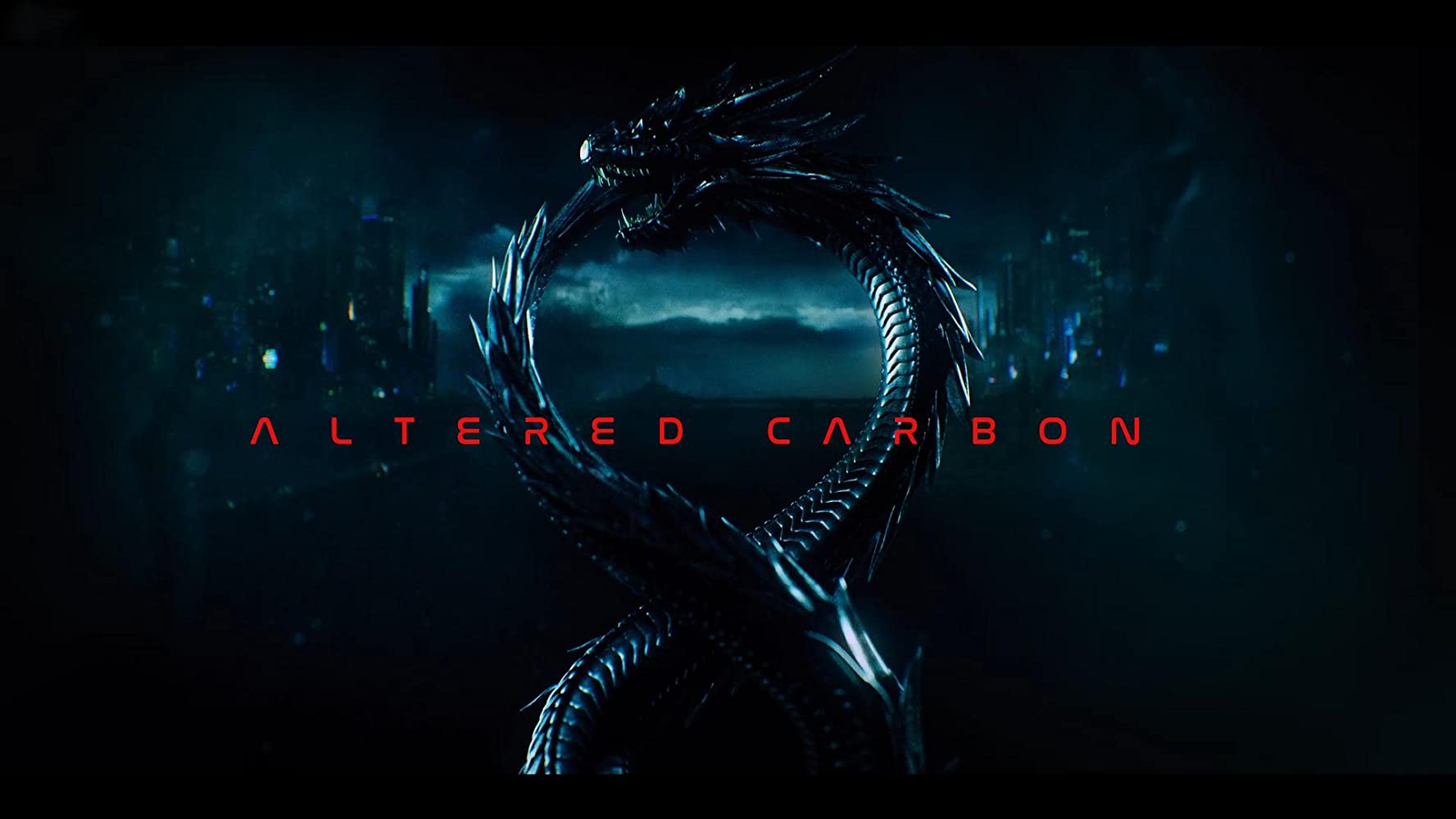 Back in 2018, Netflix launched the first season of Altered Carbon, a Blade Runner (1982)/Ghost in the Shell (1995) knock-off where human beings could download their consciousness into a computer chip in order to switch between bodies and functionally live forever. It was a solid, if flawed, season of high concept sci-fi television, but it didn’t attract the huge following of something like Stranger Things or Westworld. Apparently though, it did well enough for Netflix to throw their full support behind the franchise, as not only a second season to the main show, but also an animated prequel movie (Altered Carbon: Resleeved (2020)) were released on the streaming platform in the past month. Netflix clearly wants to elevate Altered Carbon to be one of its flagship franchises, but unfortunately it hasn’t quite worked out how to make this series work.

Season two of Altered Carbon follows a similar formula to its predecessor, having former rebel super soldier Takeshi Kovacs (Joel Kinnaman, Anthony Mackie, Will Yun Lee, and Byron Mann) being hired to investigate the death of a really rich guy while dealing with ghosts from his past, but it updates this story in several important ways. For one, the thematic focus of the series has shifted. Where season one was interested in the economic implications of immortality, season two explores its effects on a person’s soul. Every character in the second season of Altered Carbon has a personal history that stretches back hundreds of years, and they clearly feel the weight of those centuries. All the wounds, traumas, decisions, relationships, and breakthroughs that they’ve endured affect the ways they interact with each other and the world around them. It’s a fascinating look at the consequences of immortality that validates the central concept behind the show.

Structurally too, season two is an improvement over season one. A lower episode count and shorter runtimes allow for a tighter, more focused story shorn of the distracting tangents that plagued the first season. This leads to a few interesting elements feeling underdeveloped, but overall it makes for a kinetic and engaging season of television. The new season also almost entirely ditches the creepy voyeurism of its predecessor and effectively addresses the whitewashing issue by switching out lead actor Joel Kinnaman for Anthony Mackie and giving more screen time to Will Yun Lee, who plays Kovacs’ original sleeve.

Unfortunately, changing the actors is one of the biggest problems with Altered Carbon. Kinnaman was never great as Kovacs, but he brought a hard-edged determination and constant annoyed bewilderment that gave him some definable character. Mackie just seems like he’s playing a completely different and much blander character. He has a natural charisma and more emotion, but he’s also throttling it back like he knows those qualities are out of place for Kovacs. He’s not bad, but Kinnaman was definitely better. To be fair, this probably isn’t Mackie’s fault. Both Kinnaman and Mackie are good actors who have struggled to define Kovacs as a character, which speaks more to the quality of the writing than their acting talents. Kovacs is easily the weakest character in the series, without many concrete character traits beyond “brave.” He’s apparently an amazing detective, though we rarely see any evidence of this onscreen. We’re told that he’s sensitive, but he never displays that. Overall, the audience is told many things about Takeshi Kovacs, but is never actually shown any of them. It’s a major failing in any TV show, but it’s especially noticeable in one where the lead character is played by many different actors. If there isn’t a constant character that informs each actor’s performance, it can be hard to connect all of them to a central idea.

The other major failing of the second season are its sets and lack of world building. The first season of Altered Carbon, for all its narrative foibles, did an excellent job of establishing the world that its story existed in. It was complex, full of life, and implied a wider, more diverse ecosystem beyond what the audience saw in the show. Season two loses much of that, only giving the details necessary to drive the story forward. This is displayed best by the lackluster sets and location design throughout the season. Many of the sets feel small and cramped, like there wasn’t enough budget to give characters enough room to walk around in. There are also very few establishing shots, robbing the show of any sense of connected geography. The overall feeling is that locations don’t exist in connection with each other, and certainly aren’t part of an expansive universe. For a show that’s partially an intergalactic space opera, it’s odd that its world feels so small.

Luckily, Altered Carbon makes up for those flaws with several excellent side characters. Victorian-author-cosplaying A.I. hotel owner Poe (Chris Conner) returns as the comic relief and emotional foil to the series’ more stoic characters. Quellcrist Falconer (Renée Elise Goldsberry) is upgraded from a background character in season one to part of the main cast, bringing alternately savage ferocity and inspiring leadership. Newcomer Trepp (Simone Missick) rounds out the cast of heroes, and basically shows exactly what Takeshi Kovacs should be written like: smart, capable and sick of the incompetence, arrogance, and indifference that surround her. Even the season’s villains Daneca Harlan (Leila Loren) and Ivan Carrera (Torben Liebrecht) are compelling, bringing enough personality to spice up relatively generic roles.

All of that put together creates a show with a ton of promise but a few major flaws. The concept of immortality is interesting, and the storytelling consistently explores it in new and compelling ways. The foundation for an interesting world is in place and there is a plethora of fascinating side characters to fill it, but it lacks the expansiveness and compelling lead character to really make it great. Luckily, the end of season two is promising, indicating a larger focus on world building and an ensemble cast in seasons to come. But then there’s the animated prequel, which is much less encouraging.

Altered Carbon: Resleeved is, for lack of a better word, bad. In it, Kovacs (voiced in the English dub by Ray Chase) has to save a young tattoo artist from assassins while investigating some irregularities in the succession ritual of a yakuza faction. It’s a mashup of the “grizzled killer must protect innocent woman” story and “young hothead wants more power from old traditionalist” story, both of which are extremely cliched. Resleeved does nothing to improve either of these concepts, just blitzing through the broad strokes of each story to get to conclusions that are obviously setup in the first fifteen minutes of the movie.

The animation is also terrible. The character models move with an uncanny jerkiness and their faces look like some sort of warped nightmare. Between the low definition animation and the constant fade-to-black editing, the entire movie feels like it was stitched together from video game cutscenes. There is one action sequence early in the film where the animation is a benefit, allowing the camera to follow assassins as they swoop around in fast paced aerial sword fights, but this excitement is never matched in later scenes. As the movie goes on, action sequences become animated in progressively choppier close-ups that just accentuate how wrong everyone’s face looks.

The worst part of Resleeved though, is that it doubles down on everything that doesn’t work in Altered Carbon, while forsaking everything that made it interesting. Kovacs is the most boring he’s ever been, forgoing even the tiniest sliver of personality, while every other character is painfully one dimensional. Furthermore, the movie ignores any discussion of immortality, using it only as a plot device for a lame third act twist. By the end of the movie it’s hard to determine what the point was; nobody grew as a character, nothing happened to expand on the main series, and there was no meaningful thematic material. Thankfully, Resleeved is less than 70 minutes long before the credits, so the audience doesn’t have to endure the mediocrity for very long.

And so, it seems Altered Carbon is at a crossroads. It’s second season improved on some aspects of the show and indicated an even better path forward for the series. Conversely, Resleeved showed what happens when the central thematic concepts and engaging story are stripped from the property. If Netflix truly wants this to be their next great science fiction franchise, they need to better define Takeshi Kovacs and the world he lives in while maintaining the quality of the side characters and discussion of immortality. If they do this, Altered Carbon could transform into a truly excellent TV show. Failure to do so will result in more trash like Resleeved.