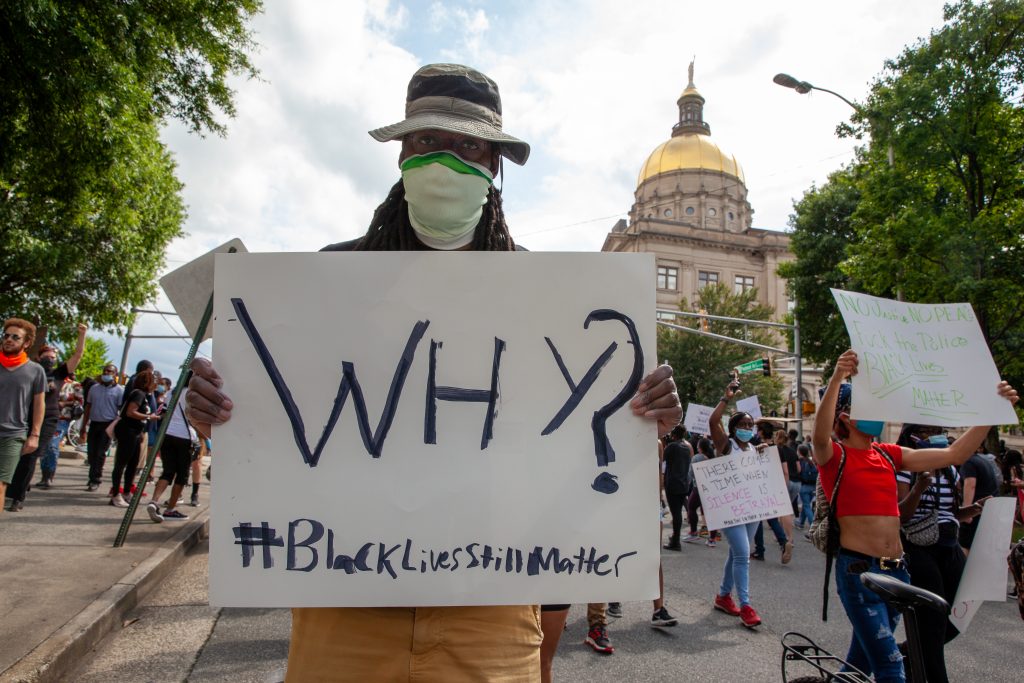 Content Warning: racism, depictions and images of assault and violence

Editor’s note: All protesters with their faces visible in this photo essay either gave their direct consent to the photographer or identified themselves with the Atlanta Police Department.

On Friday, May 29, a large protest was organized in Atlanta by a group of college students over the death of George Floyd and continued police brutality against people of color. This protest is one of hundreds that have broken out in the U.S. and around the world since Floyd was killed by a white police officer in Minneapolis on May 25.

While the Atlanta march ended peacefully, some protesters moved closer to the CNN Center where they were met with a police line. Police left behind police vehicles that were burned by protesters, and eventually protesters were pushed back by police using riot shields. Protesters and police clashed throughout the evening, with some looting occurring in nearby areas and police using tear gas and other crowd control methods against protesters.

In the days that followed, police and protesters would confront each other numerous times, particularly before a newly instated 9 p.m. curfew. There was no more looting reported throughout the week and a half of protests that followed.

Atlanta is a home both to the civil rights movement as well as to monuments of Confederate generals. Protesters have demanded improved police training, defunding the police, as well as for statues around the states’ capitol, one of a Ku Klux Klan leader, to be removed. While the mayor of Atlanta, Keisha Lance Bottoms, has agreed to some of the Obama 21st Century Policing recommendations, little else has been done to answer the demands of ongoing protests.

These are photos captured since that Friday of protests all over the metro Atlanta area.

nap98 Nathan Posner is a rising sophomore in the college, studying government with minors in film & media studies and statistics. Nathan spends most of his time doing digital and photo work for campaigns as well as covering sports, protests, and other events. He was born and raised in Atlanta, GA.