Jennifer Wiggins, former associate director for Sexual Assault Response and Prevention (SARP), resigned from Georgetown on July 10 for a position at the National Institutes of Health.

Wiggins began working for the university in 2015 as a staff clinician and sexual assault expert in Georgetown’s Health Education Services (HES) office. Wiggins acted not only as a counselor to students in her role as a clinician but helped educate the student body on the prevalence of on-campus sexual assault and resources to aid survivors of sexual misconduct. She was seen by many students as a trusted resource for consultations on sexual health and assault.

Wiggins has been the associate director of SARP since 2015, as well as the staff advisor for the student-led Sexual Assault Peer Educators (SAPE) program. Wiggins is credited with much of SAPE’s recent growth—in her first year as the advisor, SAPE’s membership almost doubled from 55 to 100 undergraduate participants.

Under Wiggins’ advisorship, SAPE held workshops for an average of 1,800 students each academic year. Since she arrived on-campus, SAPE has put a limit on numbers of student educators as membership increased.

As an educator, Wiggins has developed programming through the Center for Student Engagement such as “Take Back the Night,” and “Negotiating Black Bodies.” As a woman of color, Wiggins also worked to create programming specifically for Georgetown’s on-campus communities of color such as “Building Lives Around Sound Truth” and “Generating Lifeskills for Our Wellness.”

Wiggins was also present for administration discussions with the Black Survivors Coalitions during a sit-in in February 2020.

“It’s sad to see one of the most caring and active members of our community leave,” Bernard wrote in an email to the Voice. “We hope that Georgetown replaces her as soon as possible because her position and contribution to our community was invaluable.”

While Brittany Egan,  staff clinician and sexual assault services specialist at HES, will replace Wiggins as the staff advisor to SAPE, calls for a new associate director of SARP remain especially since Title IX-related positions have been left vacant in the past.

“We know the important role this position plays and finding an appropriate replacement is a top priority,” a university spokesperson wrote in an email to the Voice. 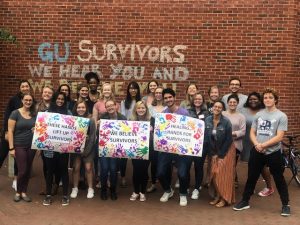