Healy Hall is a focal point on campus. Photo by John Woolley

The students were chosen from a field of eight candidates to join the council, which serves as a liaison between the student body and the College Dean’s Office. Election results were announced on CAC’s Facebook page the day after voting closed and a little over two weeks after the online campaign season began. Voter turnout for the contest remained low—only 208 out of an estimated 900 eligible first-year students voted in CAC’s election this semester, just under 25 percent.

Kim, Murrel, Su, and Thapar will join CAC’s 12 upperclassman representatives to advocate for the needs of students in the College, particularly as they relate to the coronavirus pandemic. Su, for instance, ran on a platform of expanding mental health resources for students not on campus.

“I think all four of us have a goal of flexibility and inclusion,” Su said. “For me, I think a big part of it is mental health advocacy, and extending cura personalis to recognize that we have to care for people as individuals before we can care about them as students.”

While CAC normally goes on recess between semesters, the group remained active this past summer with town halls to keep students informed on the then-pending decision about returning to in-person instruction. Liddy Kasraian (COL ’21), CAC’s president, feels the organization’s typical role has developed because of the unusual circumstances.

“Students this semester have a lot more concerns that they want to raise to the deans,” she said. “That’s not a great thing for the students, but that’s a good thing for us because it gives us a lot more to talk about and advocate for. I think it’s a really important semester to be in this sort of role because of how quickly things are changing.”

One of CAC’s largest functional changes is how the group is handling its community programming. CAC is responsible for organizing internship panels and research fairs, as well as high-profile annual events like the Majors Fair and Donuts with the Deans. Without the availability of physical venues, Kasraian and the other representatives are reconsidering how to approach these events.

“A big goal of the organization under a normal semester is to build community and to foster better relationships between deans, administrators, and students in a more relaxed setting. A lot of the time that takes place over food, in person, in a really casual environment. I think that one of the challenges with being online is that it feels a little more sterile,” Kasraian said.

In lieu of in-person gatherings, CAC instead plans to restructure the Majors Fair into a week of online programming, with Zoom information sessions for each of the College’s departments. The programming is planned for the week of Oct. 12. 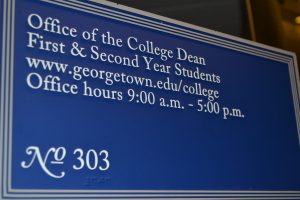