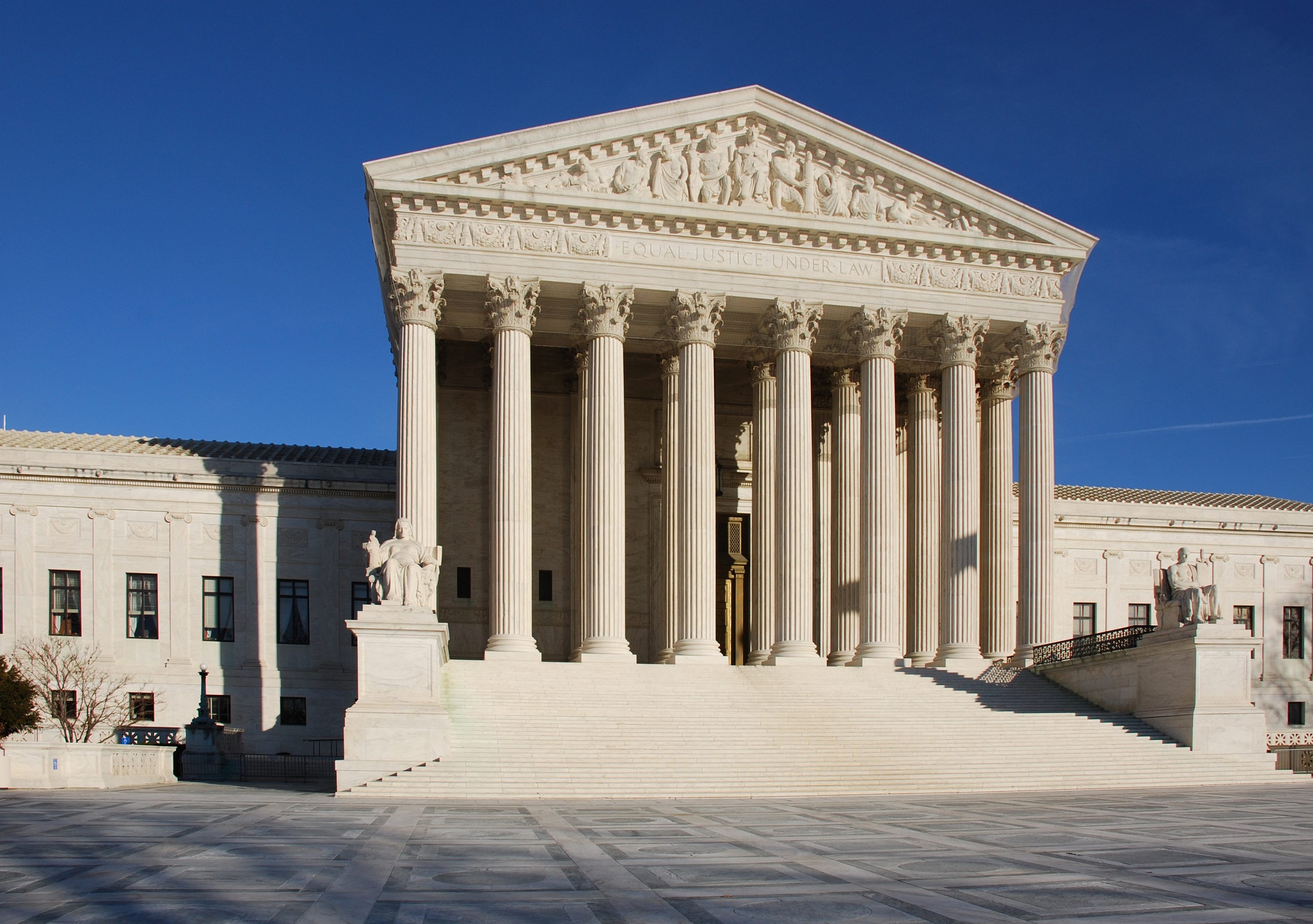 Less than three days later, journalists would begin to document a White House in disarray.

In a deluge of reporting, articles rendered the Barrett ceremony as a likely super-spreader event of COVID-19 that led to the hospitalization of Trump and ground the breakneck pace of the Barrett confirmation to a halt. Because three Republican senators in attendance tested positive for COVID-19 and at least three more are preemptively quarantining, Senate Majority Leader Mitch McConnell no longer has the votes to confirm Barrett in the near future. Though the calculations Republicans are making in the short-term have changed, the event held on Sept. 29 offered crucial insight about the current state of the Supreme Court.

The GU Politics event, titled, “#SCOTUS: A New Justice: The Nominee, The Senate, and The Politics of The Highest Court,” brought together four political operatives and leading players in the most recent Supreme Court nomination fights. This included Antonia Ferrier, the staff director of the Senate Republicans Communication Center, Brian Fallon, former press secretary for Senate Minority Leader Chuck Schumer, Ron Bonjean, former spokesperson for Republican House and Senate Leadership, and Stephanie Cutter (LAW ’97), the deputy campaign manager of the 2012 Obama Presidential Campaign. The group discussed the emerging Republican and Democratic strategies around the confirmation hearings and their potential impact on the  Nov. 3 election.

Mo Elleithee (SFS ’94), executive director of GU Politics, steered the conversation away from the merits of Barrett’s nomination to America’s highest court. Instead, Elleithee reflected on the decades-long friendship of Justice Antonin Scalia and the late Ginsburg, asking about areas in the judiciary Republicans and Democrats can find common ground. But amid the latest in a string of divisive Supreme Court nominations, the panelists felt there was no room for compromise.

Fallon likened the visceral reaction liberals across the country expressed to honor RBG’s “dying wish” and wait to confirm her replacement to what conservatives experienced four years earlier. One hour after Senate Majority Leader Mitch McConnell learned Scalia had passed, he immediately pledged to deny then-President Barack Obama the chance of seating a third left-of-center justice until after the 2016 election.

Following Trump’s electoral victory, he not only filled Scalia’s seat with Justice Neil Gorsuch in April 2017 but also replaced retiring Justice Anthony Kennedy with Justice Brett Kavanaugh one year later. As the likelihood of Trump appointing a third justice in four years grows, Fallon said Democrats are determined to prevent a permanent liberal minority on the court with the confirmation of Barrett.

“A lot of Senate Democrats want to be seen as mirroring that intensity and channeling those feelings they are observing out in the country from not just die-hard progressive activists, but I think a lot of suburban women that will count as swing voters in this election,” Fallon said.

According to Ferrier, there is also an unprecedented intensity coming from the political right to decisively act on a once-in-a-lifetime chance to solidify a 6-3 conservative majority on the Supreme Court for the next generation. With a 53-47 Republican majority in the U.S. Senate, Ferrier believes that McConnell’s decision to proceed with a vote on Trump’s nominee announced just hours after Ginsburg’s death, was an extraordinarily easy one.

“The reality is just given this window he made the decision to go forward,” Ferrier said. “He got the votes and when you have the votes—you move forward.” So far, only two Republican Senators, Sen. Susan Collins of Maine and Sen. Lisa Murkowski of Alaska have pledged to not vote in favor of Barrett if the Senate votes on her confirmation before the election.

According to Ferrier, no one should be surprised by Republicans and Democrats reversing their respective positions from just four years ago on seating a Supreme Court nominee in an election year. Ferrier, speaking on behalf of Republicans in the Senate, was certain that if Senate Democrats were in the same position, they would do the same no matter the consequences.

“Now I know that’s ugly. I know it’s not a pleasant thing,” Ferrier said. “But that’s just the reality. When you have power and the ability to do it—you do.”

However, Fallon is confident Schumer will be able to prevent the hearings from proceeding in a traditional manner when they do begin. He cited the possible use of the “two-hour rule,” which allows a senator to stop all committee proceedings once the Senate has been in session for two hours. He also foresees Democrats could unexpectedly require a quorum call, which mandates 51 senators to be present. If every Democratic caucus member and just three Republican senators are absent, the Senate cannot adjourn. To put pressure on vulnerable Senate Republicans up for reelection, Fallon also envisions Senate Democrats slowing down Senate legislation, requiring Senate Republicans to stay in Washington and cast last-minute votes instead of campaigning in their home states.

“A lot of liberal activists would like Chuck to telegraph what he is going to do on that front, but I don’t think Chuck will because part of the success of it relies on the element of surprise,” Fallon said.

“Democrats right now, many of them are calling this an illegitimate nomination and refusing to meet with the nominee to make their point,” Cutter said. Sen. Joe Manchin has been the only Democratic senator to meet with Barrett so far.

Although the top-ranking members on the Senate Judiciary Committee will set the tone for the proceedings, according to Elleithee, the least ranking member on the Democratic side will draw the most attention—2020 Democratic Vice-Presidential Nominee, Sen. Kamala Harris.

There is genuine enthusiasm in the Democratic Party for the spotlight to be shifted onto Harris, Fallon says. He cites her electric moments questioning former Attorney General Jeff Sessions and current Attorney General Bill Barr during their respective confirmation hearings, which propelled her onto the national stage.

“A common sentiment that I encounter on these coalition calls is if there is any way we can get all the other Democrats to yield on the committee to Senator Harris,” Fallon said. However, Fallon acknowledged that Harris may not have the same freedom she had in the past.

“Now that she’s the number two on the ticket, I’m not so sure that the Biden Campaign will give her the free reign to use the same tactics,” Fallon said. “She’s not just responsible for herself and her Senate office, but to the larger campaign structure.”

When the confirmation hearings begin, Cutter predicts the Democrats on the Senate Judiciary Committee will oppose Barrett’s nomination by painting her as a Trump loyalist, especially since in her Senate questionnaire, she declined to recuse herself if a case related to the 2020 election comes before her.

“You can expect that to be a big issue at the hearing, particularly because President Trump is already pointing towards the importance of this nominee because he expects the election results to go before the Supreme Court and he wants a 6-3 advantage,” Cutter said.

According to Cutter, by focusing on the prospect of Barrett overturning Roe v. Wade or the Affordable Care Act, Senate Democrats can show the human impact of a Barrett confirmation. A week after the election, the Supreme Court will hear oral arguments in a case brought by 18 Republican State Attorney’s General under the Trump administration’s guidance suing to overturn the Affordable Care Act.

“She has some writings and other evidence that she’s in favor of overturning it,” Cutter said. “She was very critical of what Justice Roberts did the last time it came to the Supreme Court and preserved the law.”

In a tumultuous election year, if the American news cycle becomes saturated with wall-to-wall coverage of the confirmation hearings of Judge Barrett, it could provide a much-needed boost to the faltering Trump campaign, according to Bonjean.

“I think for the Trump campaign, any day that they are talking about something that is not COVID is a good day for them,” Bonjean said. This event convened two days before Trump announced on Twitter that he and First Lady Melania Trump tested positive for COVID-19.

Although Supreme Court nomination fights have historically been catalysts to mass mobilize Republican voter turnout while Democratic turnout remains unchanged, the battle to confirm Barrett has revised this narrative, according to Cutter. Because liberals are so afraid of losing the gains won from the Supreme Court during the past few decades, Democrats around the country are motivated to vote like never before.

Fallon partially attributes the emerging Biden blowout in November to national polling which shows the American public thinks the confirmation process should be delayed until after the election. Because Senate Democrats in competitive re-election races and those running against Republican incumbents know the majority of Americans want to wait and take up the open Supreme Court seat after the election, they remain unafraid to toe the party line.

However, according to Ferrier, Amy Walter, the director of the Cook Political Report, believes that the Supreme Court nomination will have virtually zero effect on the trajectory of the race. According to Walter, if the presidential impeachment, the COVID-19 pandemic, and resulting economic devastation, protests over police brutality, and myriad natural disasters barely nudged the race, there’s no reason Barrett’s confirmation to the Supreme Court would be the event to upend everything.

Looking into a future where Barrett is confirmed, Fallon believes no matter the outcome of the presidential election, Democrats will have no choice but to start reforming institutions they believe no longer work in their interests. He mentioned adding seats to the Supreme Court, adding Puerto Rico or Washington, D.C. as states, and ending the Senate legislative filibuster, only requiring a simple majority of votes to pass legislation.

“There’s a budding sense among people that institutions like the electoral college, institutions like the way the Senate is set up, plus the filibuster rule on top of that, creates all these counter-majoritarian features of our democracy that some might call—the tyranny of the minority,” Fallon said.

But Ferrier cautions against Democratic overreaction to a Barrett confirmation, particularly ending the Senate legislative filibuster. She cited that Democrats have historically relied upon the filibuster to block divisive Republican legislation, including bills that would restrict abortion access. 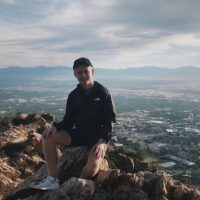 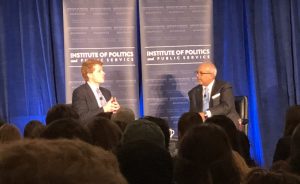 […] Four days after President Donald Trump announced Seventh Circuit Court of Appeals Judge Amy Coney Barrett as his nominee to replace Justice Ruth Bader Ginsberg on the U.S. Supreme Court, GU Politics hosted a virtual event on the nomination process and its ensuing consequences.  Less than three days later, journalists would begin to document a White House in disarray.  In a deluge of reporting, articles rendered the Barrett ceremony as a likely super-spreader event of COVID-19 that led… GU Politics anticipates coming Supreme Court fight as COVID-19 hits the White House – The Geo… […]

[…] Four days after President Donald Trump announced Seventh Circuit Court of Appeals Judge Amy Coney Barrett as his nominee to replace Justice Ruth Bader Ginsberg on the U.S. Supreme Court, GU Politics hosted a virtual event on the nomination process and its ensuing consequences.  Less than three days later, journalists would begin to document a White House in disarray.  In a deluge of reporting, articles rendered the Barrett ceremony as a likely super-spreader event of COVID-19 that led to the hospitalization of Trump and ground the breakneck pace of the Barrett confirmation to a… #Politics #anticipates #coming #Supreme #Court #fight #COVID19 #hits #White #House #Georgetown #Voi… […]