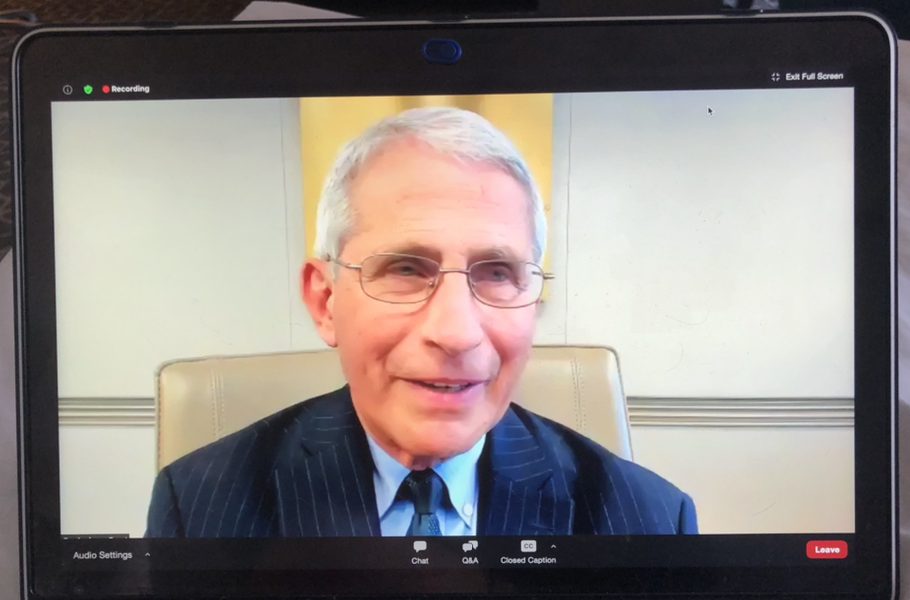 Georgetown students on Tuesday got the rare opportunity to hear a coronavirus update from Dr. Anthony Fauci himself.

Fauci, Director of the National Institute of Allergy and Infectious Diseases and leading member of the White House Coronavirus Task Force, addressed Georgetown students on July 14 in a virtual Zoom event. Throughout the conversation, Fauci avoided statements that could be perceived as partisan and discussed the recent surge in cases, the politicization of the public health crisis, and the responsibilities young people have in mitigating the spread of COVID-19.

The event, titled “A Conversation with Dr. Anthony Fauci,” was co-sponsored by Georgetown’s Global Health Initiative, the Institute of Politics and Public Service, the Kalmanovitz Initiative on Labor and the Working Poor, and the O’Neill Institute for National and Global Health Law. More than 135,000 people tuned in to watch the live event, which was also streamed on Facebook and Twitter.

The United States currently has the highest number of COVID-19 cases out of any country worldwide, with a total of over 3.4 million reported cases and over 138,000 deaths. States that were among the first to reopen, including Florida and Texas, have recently emerged as hotspots for COVID-19. With rising infection rates among younger people and many states relaxing social distancing guidelines, Fauci urged Georgetown students to recognize their role in slowing the virus’ spread.

“Given the nature of this outbreak, even if you get infected, have no symptoms at all, and never get sick, you are inadvertently propagating the pandemic,” Fauci said, referring to the likely transmission of the virus from a young person to more individuals. “You are actually also putting other people in danger.”

Despite his warnings to students, Fauci was careful not to sound moralizing. “I’m not blaming anyone and I think people do this innocently. They don’t mean to be part of the problem, but, inadvertently, they are part of the problem, and that’s the message we’ve got to get across,” he said.

For much of the conversation, Fauci avoided making criticisms and definitive statements, often beginning his responses with “it’s a complicated situation.” When asked about the U.S. notice of withdrawal from the World Health Organization, Fauci said he hoped the matter would be “resolved in a way that we find that’s all favorable.” Despite numerous public disagreements with President Trump and recent White House attempts to discredit the public health expert this past weekend, Fauci made no mention of the President.

Responding to misinformation concerns and the politicization of the pandemic, Fauci emphasized the political neutrality of science and urged people to trust respected medical authorities and research.

“The most important thing to do when you’re dealing with a divisive atmosphere in the country… is to stick to the science and stick to the evidence,” explained Fauci. “Because that’s the thing that’s clean and crystal clear. There’s no ideology involved; there’s no political persuasion involved.”

Fauci also used the time to clarify confusing reports on COVID-19, refuting the idea that the rise in cases is from testing alone. He also explained that, while debatable, most people think aerosol transmission, the spread of an infectious agent via nanoscopic droplets that remain in the air for long periods, “is not the dominant modality of transmission.”

Fauci expressed cautious optimism on the state of vaccine development, saying he expected to know whether current vaccine candidates were safe and effective by the end of the year. Moderna’s vaccine candidate recently showed promising results in the first phase of trials and will enter its third phase at the end of July, with more vaccine candidates to follow in the late summer and fall. “We’re in a pretty good place when it comes to vaccines,” he said.

For now, Fauci encourages everyone to wear a mask when they’re out, wash their hands, avoid crowds, and maintain social distance.

“The way to squash out an outbreak is to not have anyone get infected, so you not getting infected is a big contribution to what we need to do,” Fauci said. “So hang in there, do your thing, and don’t get involved in any of the political nonsense. That’s a waste of time and a distraction.”

Georgetown students lose stored items in the shuffle of COVID-19