Sluggish start dooms the Hoyas in loss to Seton Hall 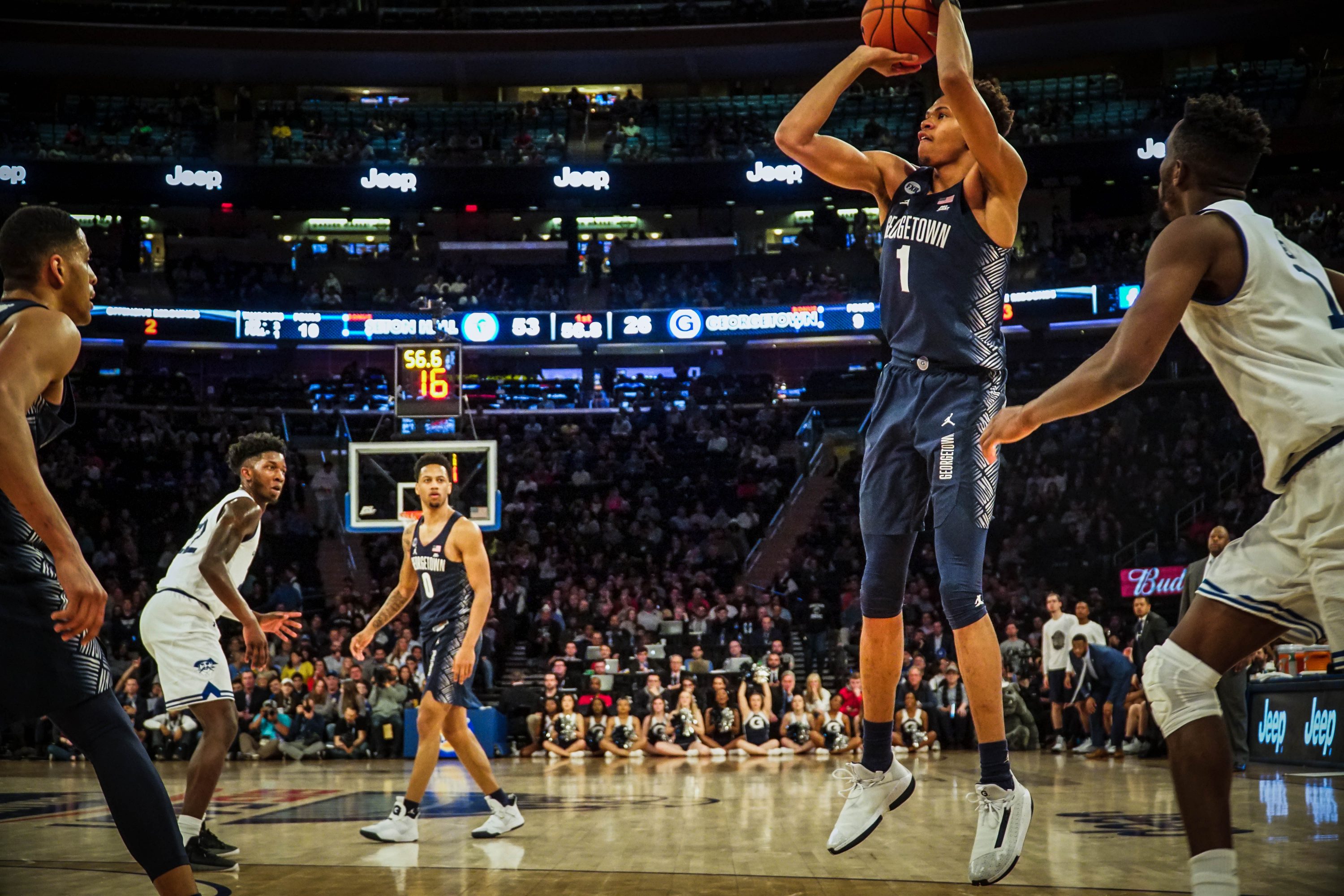 The Georgetown Hoyas men’s basketball team (3-5, 1-3 Big East) fell to the Seton Hall Pirates (6-4, 3-1 Big East) on Wednesday evening at Prudential Center in Newark, New Jersey by a score of 78-67. Seton Hall’s interior defense stymied the Hoyas, leading to a horrific first half offensively and an insurmountable double-digit deficit. The Pirates controlled the game from start to finish behind career performances from senior forward Myles Cale (30 points, 10-16 shooting, 5-9 from three) and junior guard Jared Rhoden (26 points, 12 rebounds). Sophomore center Qudus Wahab paced the Hoyas with 16 points and 13 rebounds, and senior guard Jahvon Blair added 14 points of his own.

Both teams were relatively sloppy in the early going, with Seton Hall going 0-4 from deep and Georgetown committing three turnovers in the first three minutes. The Hoyas had trouble with their shot selection, as they were unable to get the ball inside to Wahab. Cale had the hot hand early for the Pirates, scoring 8 points including 3-5 from two-point range.

Georgetown’s lack of creators in the halfcourt offense continued to plague them in the first half, as they started a pathetic 2-17 from the field. Even when they tried to go inside, junior center Ike Obiagu rejected any shot attempts, amassing six blocks in just the first 12 minutes and seven in the first half. Wahab started the game 0-5 from the field, and Seton Hall’s size proved difficult for a Hoyas team looking to play inside-out.

“I thought [Ike Obiagu] and Jared [Rhoden]’s energy on defense really set the tone for us,” said Seton Hall head coach Kevin Willard. “The guys did a good job paying attention to the scouting report. We really wanted to chase them off the three-point line early in the first half and send them to Ike.”

Even though the Hoyas held junior forward Sandro Mamukelashvili off the score sheet in the first half, they knew that the Pirates had many different players who could beat them. That proved to be the case in the first half. Though Seton Hall did not shoot particularly well as a team (36.4% FG), the energy provided by Cale (11 points) and Rhoden (14 points, 7 rebounds in the first half) spurred Seton Hall to a 33-19 lead at the break. The game appeared to be a little too fast for freshman guard Dante Harris, who came up with an empty 0-4 from the field and 4 turnovers in the first half.

“We know they have a young backcourt and we just wanted to pressure them and get them a little rattled,” said Rhoden. “The game plan was to play our game and force them to play our game.”

Both teams started out the second half with cleaner shooting, as the Hoyas began 6-9 and the Pirates were 5-6 from the field. However, Cale and Rhoden continued their dominance in the second half, shooting a combined 8-9 from the field and 5-5 from three to combine for 22 points in the first eight minutes of the half. Many of their shots from three were uncontested, and Seton Hall continued to control the game.

“Defensively, we still didn’t do a good job of guarding their guys at the three-point line,” said Georgetown head coach Patrick Ewing. “You’ve got to take the challenge, run them off the three-point line on the floor. That’s one of the things we talked to them about before the game. They’re a good shooting team.”

Though the Hoyas began to shoot better in the second half, they could not string together any sort of run, as the Pirates easily answered any Georgetown makes. Cale exited the game temporarily after Bile unintentionally poked him in the eye, but the Hoyas still had their struggles in halfcourt offense. Wahab was able to draw several fouls when guarded by Obiagu, but Rhoden continued his impact offensively, crashing the glass and getting tough baskets to go.

The Hoyas showed some fight coming down the stretch, with senior forward Jamorko Pickett finding Blair for a three-pointer and drawing a foul in transition to cut the deficit to 9. However, Rhoden matched his career-high of 26 points with a jumper from the elbow, and restored the double-digit lead that would last to the end of the game. For the Hoyas, the few bright spots included the return of freshman guard Kobe Clark and a 2-3 night from the field for freshman forward Jamari Sibley in 7 minutes of action.

Over the course of the game, it was obvious that Seton Hall’s depth overwhelmed Georgetown’s inability to execute in the halfcourt offensively. The Hoyas once again had trouble guarding the three-point line, as Cale and Rhoden combined for 8-16 shooting from beyond the arc. On offense, Georgetown lacks consistent creators, which led to an abysmal first half in terms of shooting and a second half where the Hoyas could not sustain a run to get back into the game. It didn’t help that Obiagu amassed nine blocks in the game, rejecting any hopes of offense inside the paint.

“We don’t have a guy that we can throw the ball to go get me a bucket,” said Ewing. “We have to be able to do it as a team. We’re gonna have to move people around. Ball movement, body movement, and then take your shots and make your shots when you have them.”

Georgetown is off until the new year, when they host Marquette (5-4, 1-2 Big East) on January 2. Tipoff is scheduled for 7:30 p.m. and the game will be televised on CBS Sports Network. For continued coverage of men’s basketball and all Georgetown sports, follow @GUVoiceSports on Twitter. 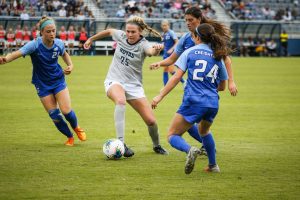