A Tale of Two Halves Dooms Hoyas Against Marquette 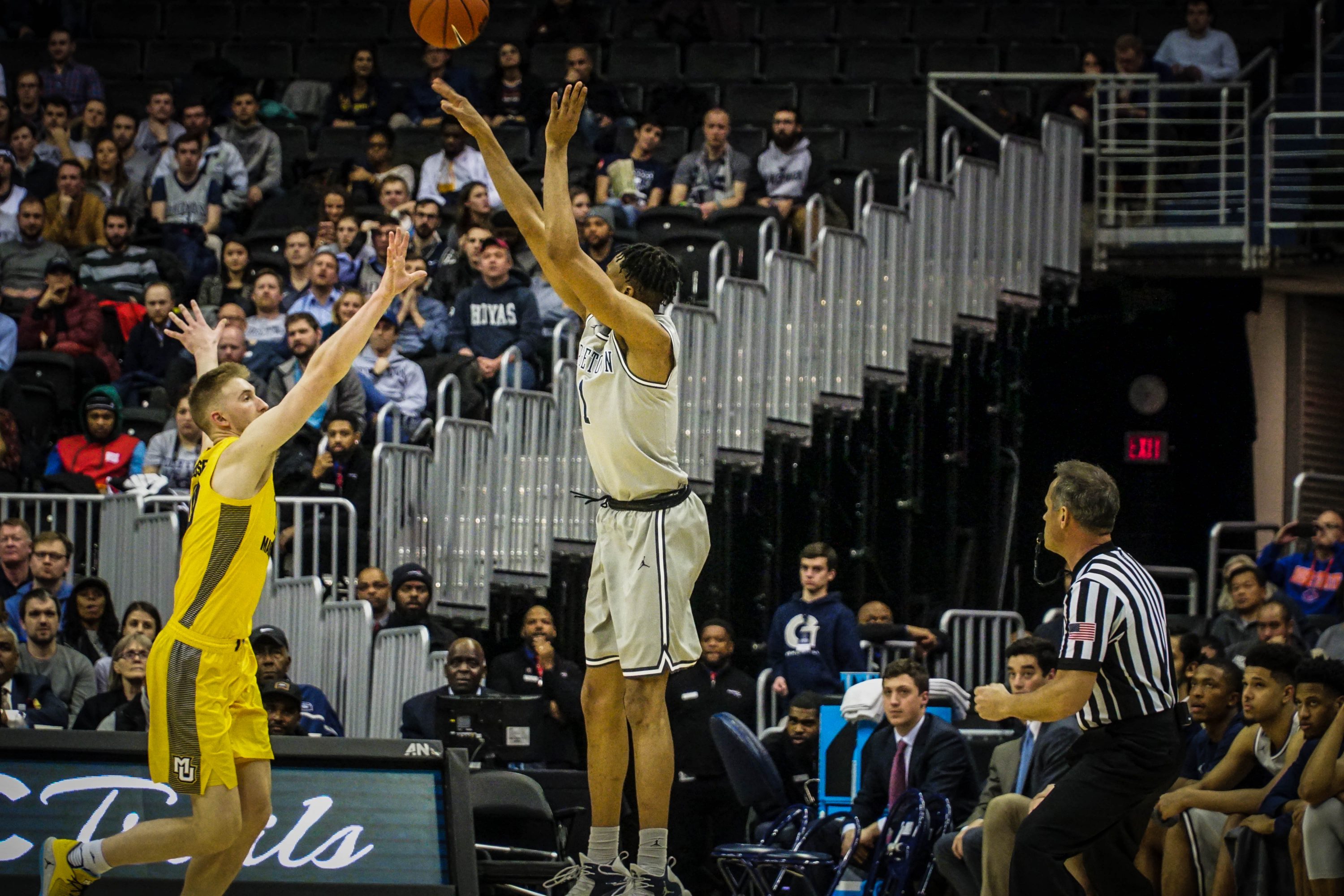 The new year opened in a painfully familiar fashion for the Georgetown Hoyas men’s basketball team (3-6, 1-4 Big East) with a strong first half effort giving way to a dreadful second half collapse in a heartbreaking 64-60 loss to Marquette (6-5, 2-3 Big East). After the Hoyas built a 16-point halftime lead, the Golden Eagles steadily chipped away until taking the lead for good with 1:01 remaining. Georgetown was led by senior guard Jahvon Blair who scored 20 points off the bench after a coach’s decision to remove him from his usual starting spot. After the game, Coach Patrick Ewing would not elaborate on that decision, saying simply “Coach’s decision. I don’t even want to get into it.” Sophomore center Qudus Wahab also had a solid game, recording a double-double with 13 points and 10 rebounds on the night. Marquette’s comeback effort was spearheaded by senior forward Jamal Cain’s 25 points on an efficient 10-15 shooting from the field (including 4-5 on threes).

It was a sloppy start for the Hoyas, with turnovers on each of their first three possessions enabling Marquette to seize an early 9-4 lead. Ewing benching usual starter Jahvon Blair seemed to provide extra motivation for him and the team as he came off the bench, propelling a 14-0 run after the early deficit to put Georgetown ahead 18-9. A strong defensive effort from the Hoyas contributed to an ice cold start for Marquette, as the Golden Eagles shot a woeful 25.8% (8-31) in the first half and were dominated on the boards, 26 to 18. Georgetown’s performance translated into a 36-20 lead going into halftime, appearing very much in control.

Marquette coach Steve Wojciechowski described the opening as a classic Big East slugfest. “The Big East has a way of knocking you back and hitting you in the chin, and I think it certainly did with our guys.” Wojciechowski noted. “But our guys showed great character to bounce back from that and be able to regroup and make enough plays to beat a really good Georgetown team.”

Opening the second half trying to avoid a collapse similar to previous contests this season, the Hoyas were able to hold on through the first ten minutes of the second half. Georgetown and Marquette fought to a standstill, with a Blair jump shot eleven minutes into the second half punctuating a 54-42 Hoya lead. Nonetheless, improved shot selection and better effort on the boards opened the door for a Marquette run and paved the way to a razor thin margin in the final five minutes.

“We did not get off to the start we wanted to and a lot of that is the result of how Georgetown was playing. But our kids showed great resolve to stay with it and to find ways to win,” said Wojciechowski.

A flurry of mistakes repeatedly gave Marquette the ball or sent them to the foul line in the late game, fueling a run while the Hoyas struggled to establish an offensive rhythm. With the lead collapsing, Marquette’s freshman forward Justin Lewis proved elusive for the Georgetown defense, scoring 6 of his 10 points off the bench during the last eight minutes, including a layup to make it a one-point game, 56-55, with 4:09 remaining. Though Marquette seemed to take advantage of the mismatch between the more mobile Lewis and Wahab, a more traditional big man, Coach Ewing stood by the matchup postgame.

“I thought for the most part he [Wahab] did a pretty good job on him, except for at end,” said Ewing. “Justin couldn’t guard Q down on the other end, we just didn’t take advantage of it and then when Q got the ball, he got a couple of turnovers.”

Even amid a grim second half, including a 17-2 Marquette run to take a 59-56 lead with 2:10 remaining, the Hoyas had a chance to fight back. Two young players regained the lead, with a quick layup by freshman guard Dante Harris followed by a Wahab dunk (assisted by Harris) bringing the game to a 60-59 Georgetown lead with 1:20 to go. The same miscues that dominated their game continued in the decisive final sequence, however, as a make inside by Marquette sophomore guard D.J. Carton with 1:01 remaining gave Georgetown a crucial opportunity down 61-60. In that pivotal situation, an unsettled possession was over quickly with a turnover by graduate guard Donald Carey. A three point attempt by Jamal Cain quickly followed, and he didn’t miss. With 15 seconds to go, the game was all but over, 64-60.

Cain was undoubtedly the leader for the Golden Eagles, who scored 20 of his 25 points in the second half, including 8-9 shooting in that period. On a down night overall for Marquette’s offense, with none of his fellow starters in double digits (Lewis off the bench was their second leading scorer with ten points), Cain repeatedly proved too much for Coach Ewing’s defense. Among those kept in relative check was the Golden Eagles’ leading scorer on the year, redshirt senior Koby McEwen, who tallied only 6 points on 6 attempts (including 0-3 from deep). Fellow guard D.J. Carton managed seven, but on a dismal 3-11 shooting.

“Jamal was great. That’s exactly what you would want your senior to do. From the tip to the buzzer, but especially in the second half, and everybody is going to point to the big three that he hit and that was huge, but he was terrific throughout,” said Wojciechowski. “When you’re struggling, when you’re against the ropes like we were, you need your veterans to step up and Jamal certainly did that.”

The Hoyas continued their second half struggles after a strong finish to the first period. Outscored 44-24, Marquette tightened up on the boards and in shot selection while the Hoyas seemed unable to adjust. After sending Marquette to the free throw line only 5 times in the first half, the Golden Eagles got 12 chances in the second half. Wahab flashed occasional dominance inside, but Georgetown was unable to build a consistent advantage in the paint. Despite his contributions late, Dante Harris also struggled as a floor general in the crucial sequences, with three turnovers of his own in that second period. Mistakes came from youth and experience alike, with 10 second half turnovers as a team and poor shooting from senior forward Jamorko Pickett leading to his benching for the final minutes of the game.

Coach Ewing expressed frustration on the subject postgame, addressing mistakes as a difficult team issue. “Everyone has to take it upon themselves to make the right decision. We talk about it, we watch film, we can drill not turning the ball over, but we just have got to make better decisions, especially at the end of the game,” said Ewing. “We turned the ball over two or three times at the end of the game when it was winning time and we can’t afford to do that. Look at the score, we lost by four points and it was a one point game with about a minute to go, and we turned the ball over. I don’t know how to clean that up.”

Georgetown men’s basketball is off until January 6th, when they go on the road at Butler (2-5, 1-3 Big East). Tipoff is scheduled for 7:00. For continued coverage of men’s basketball and all Georgetown sports, follow @GUVoiceSports on Twitter. 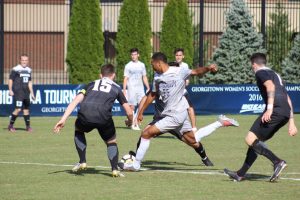 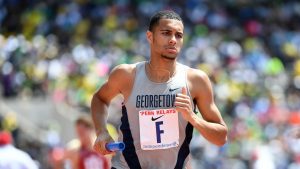