Georgetown Wins in Overtime Against Connecticut 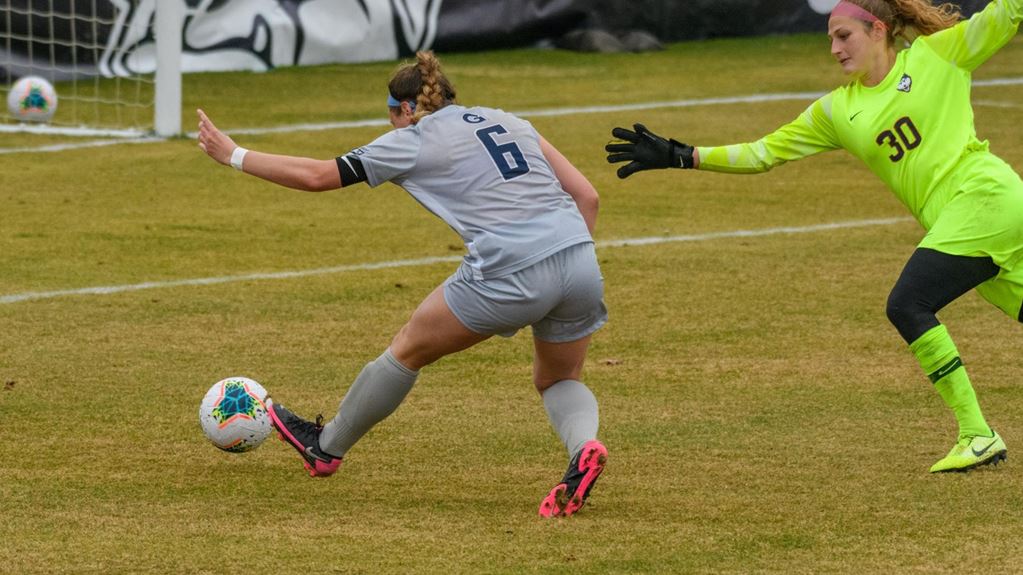 Georgetown women’s soccer (7-0-0, 5-0-0 Big East) continued their winning season against the University of  Connecticut (4-2-1, 2-2-1 Big East) on Shaw Field in rainy conditions on Thursday. Senior Jenna Menta scored her second goal of the game in overtime to seal a 2-1 Georgetown win.

Menta led the Georgetown offense to a good start with a shot on goal at 3:04. Redshirt senior and Big East Goalkeeper of the Week Randi Palacios made the save, but Menta’s second chance came quickly at 3:51. Her shot from senior Grace Nguyen’s long ball assist propelled Georgetown to a 1-0 lead. The Hoyas were able to effectively press up the field for approximately the first ten minutes, as they were soon met by a tightened Huskies’ defense anchored by redshirt junior Rachel Marchini.

Connecticut conceded its first corner to Georgetown in the 21st minute, but the Hoyas were unable to capitalize on the set piece. Graduate keeper Lauren Gallagher was able to save the Huskies’ only shot of the first half at the 22nd minute, courtesy of freshman forward Jada Konte. The first half was close and physical, as both defensive sides played well to suffocate offensive plays. Senior Kelly Anne Livingstone, Big East Defensive Player of the Week, provided constant support as center back for the Hoyas.

Connecticut did have a good chance to score off a free kick in the 24th minute from sophomore Jacqueline Hartnett. However, the ball sailed over the players, and Gallagher was able to catch the ensuing cross. In the 30th minute, the Huskies suffered an injury when sophomore and Big East Offensive Player of the Week Jessica Mazo had to leave the field and was substituted for freshman Jaydah Bedoya.

Georgetown was kept at their one goal lead, and frustration appeared to set in. The game was tense, with every possession aggressively challenged. Hoya graduate defender Kaitlyn Parcell became too physical in the 41st minute and received a yellow card. Sophomore substitute Hannah Deljkic finished up the half for the Hoyas with a final shot on goal, swiftly picked up by Palacios.

The second half of the match started with high intensity. Konte had a chance to score for Connecticut off a corner kick in the 49th minute, but was blocked. Just seconds later, a returned Mazo took her chances and missed to the left of the goal. A third scoring opportunity for the Huskies also came up empty, as senior Yamilee Eveillard was unlucky with her shot in the 52nd minute that hit the right post.

Georgetown faced its own injury worries when junior Jenna Royson required assistance off the field at 55:32. Junior Boo Jackson took over her role as defender until Royson made her recovery and returned in the 62nd minute.

Connecticut was finally able to draw even at 75:51 when sophomore Jacqueline Harnett’s free kick rolled into the corner of the goal past a seemingly disoriented Gallagher. It was the first goal the Hoyas conceded this season, and it galvanized their offense to begin an onslaught of shots on Palacios.

Sophomore substitute Sofie Fox was first to start the Georgetown shooting streak in the 76th minute. She was followed by 8 more shots from Parcell, Livingstone, graduate Daisy Cleverley, Royson, Nguyen, and sophomore Julia Leas, yet none were successful. The Hoyas ultimately outshot the Huskies 15-6. During the final minutes and in a hectic goalbox, Gallagher saved Bedoya’s shot at 88:21, and sent the match to overtime.

Georgetown kept the same pressure in the overtime period, and Connecticut did not back down. Relief came with a second goal at 95:35, when Menta poked the ball away from Palacios’ hands to get a clear strike into the net and secure the Georgetown victory. With this game winning tally, she notched her third goal of the season.

The series record between Georgetown and Connecticut is now 5-11-0, and the Hoyas continue to be undefeated in Big East play. They will next face Seton Hall on Sunday, March 21st at 1 P.M. EDT. in South Orange, New Jersey. Livestream information and live stats will be available on www.guhoyas.com. For continued coverage of all Georgetown sports, follow @GUVoiceSports on Twitter. 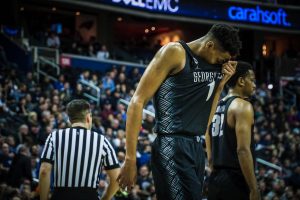 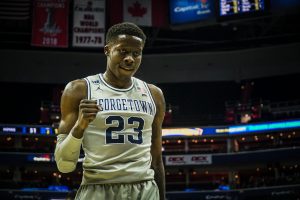