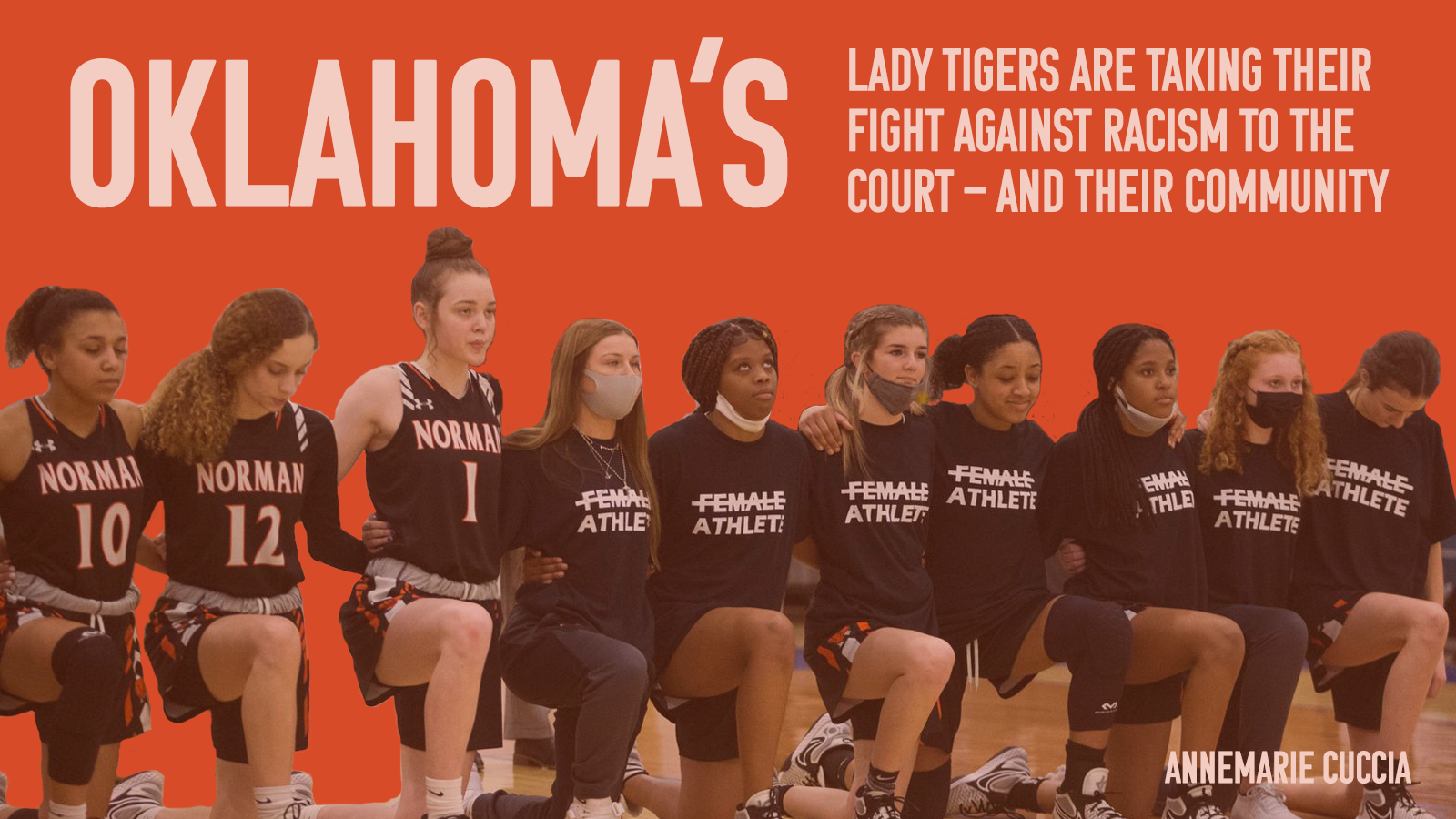 They aren’t pro athletes aglow on a field surrounded by cameras. They aren’t NCAA champions or national stars shipping off to an international tournament. They are just 14 high school women’s basketball players who took a knee during the national anthem.

They are a model for the future of racial and social justice in sports.

On March 11, Norman High School’s women’s basketball team, the defending state champions, were about to play against Midwest City in the quarterfinals of the Oklahoma state tournament. As the opening notes of the national anthem played over the speaker, the team began to kneel in unison, as they had all season. Later, players would tell local outlets the team decided together to follow Colin Kaepernick’s lead to bring a call for racial justice to athletics and spend the duration of the Star Spangled Banner with one knee on the floor. Those watching at home heard the broadcasters on the NFHS Network stream, which the school district was using for the tournament, say they would return after a break. And then they heard the ugly, racist underbelly of high school sports expose itself.

Thinking the audio wasn’t live, announcer Matt Rowan began speaking: “They’re kneeling? Fuck them,” he said. “I hope Norman gets their ass kicked…Fucking n——s.” His comments went on for over a minute. His fellow announcer, Scott Sapulpa, said nothing to argue with him. They were comments that had been directed before at athletes who kneeled, but instead of online white supremacists attacking a star athlete, it was a community member attacking high school students.

As a former student at Norman, I saw the video before it made national news. My old teachers, some of whom now had these players in their classes, immediately spoke out against the announcer on social media. Even though I have been a graduate for three years, I immediately felt a pang in my stomach—recognition. Nothing about the video surprised me. I had seen too many immensely courageous young women, Black women, shot down by white men who thought they would never be found out. It all felt like the place I grew up. The community would speak out, of course, and maybe there would even be a boycott or a protest, but nothing would change.

That is, until the players started to speak. Until the players won the state championship anyway, capping off a perfect season with an 11-point victory in the finals while wearing shirts reading “THIS IS WHY WE KNEEL.” They didn’t pretend the racist remarks were not made; they turned them on their head. There was a power to this team that brought the conversation about racial injustice from the national broadcasting stations into their community, into their high school.

“We kneel for racial injustice and we just want to make a statement,” Mikayla Parks, a team member, told KOCO News. “He proved our point to why we kneel and we are going to continue to do it.”

Much has been said, at least in the local news, of the response of the school, the broadcasters, and the district. All of the appropriate organizations apologized and the school stopped using the network to stream the tournament. Rowan, while he did acknowledge his comments were racist, gave a piss-poor statement to local news, blaming his diabetes and sugar spiking for his comments.

What struck me, as I continued to rewatch the video and follow the team, was not the persistent and horrific racism, but the players’ and their community’s response to it. They grew up in a school system where, just six years ago, and maybe still today, children were bullied for not standing up for the Pledge of Allegiance. Where middle school teachers lied and said the pledge was mandatory. Even the smallest act of resistance was noticed, and, if not criticized, was certainly not praised. They grew up in an intensely segregated public high school. They grew up in a state where a state senator threatened to penalize NBA players for supporting the Black Lives Matter movement. But none of the fear or doubt that might come from this history was evident in their response.

“We just want change within our community, our state, our country, and that change is going to start with people holding other people accountable,” player Chantae Embry told CBS. Though she said the team was surprised and deeply hurt by Rowan’s comments, they did not dissuade the Lady Tigers from continuing to speak out.

It turns out that this team hasn’t been the only one asking for change. Since 2016, articles have featured numerous high school athletics programs who kneeled in support of racial justice, including a New Jersey football team, an Iowa baseball team, and another football team from an all-Black high school just outside the District in Prince George’s County. Though there’s no official data on how many high school teams are kneeling in any given season, N. Jeremi Duru, a professor of sports law at American University, told NBC in 2018 that the trend fluctuates. Though there was a surge after Kaepernick’s initial protest, crackdowns by schools and racist responses discouraged some teams from continuing. Anecdotal evidence suggests the number of teams kneeling may have risen once again in response to the murder of George Floyd by Minneapolis police in May of 2020.

Of course, some teams are taking their activism off the field, building relationships with their communities, and encouraging younger athletes. Tangible action is always required to create lasting change. But we shouldn’t discount the impact of the symbol of the kneel, especially in communities like mine.

Conservative areas, places far from a racial justice reckoning, can easily never have the honest conversations about entrenched racism that are needed to confront the persistent hate and discrimination in our society. Of course, activists, especially people of color, will always try to introduce the subject, but as I have seen, the majority of the community can shrug it off as long as they don’t feel affected. What happened in March was different. It was the largest show of racial solidarity I had seen from the school in years. Local athletes and community members are continuing to speak in support of the players. The booster club even sold shirts like the ones the team wore in the state championship to the community.

Embry told NBC that the team knelt “because we wanted to bring attention and awareness to the fact that racism is still alive and well today.” Well, they’ve done that.

No, none of this is how a community should have to fight entrenched racism. It should be a common topic across all sectors, not just in sports. It should not be on the backs of young Black women. It should not only come up when someone is caught being horrifically racist.

But as long as we have local high school teams kneeling, we should use it as a reason to talk about what they are kneeling for. If this is how we have to introduce the concept of anti-racism to our communities, let’s embrace it.

Next time, I hope I hear a team is kneeling before I hear about the people attacking them for it. Because the takeaway of Norman should not have been one of racism, but one of fighting against it.