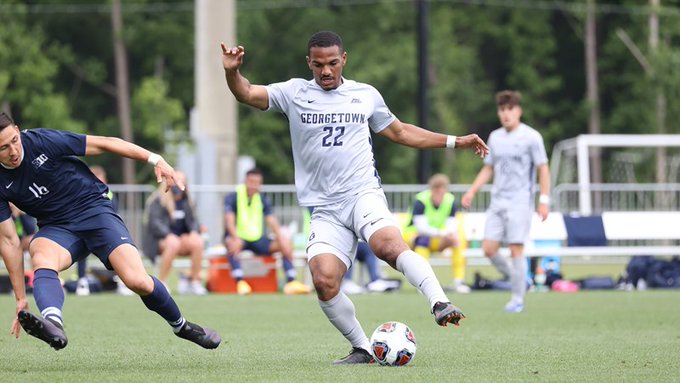 Hoyas men’s soccer fans can be forgiven if the names Zach Riviere, Martin Ngoh, and Kyle Linhares did not move the needle coming into the season. Linhares, a freshman midfielder, and Ngoh, a transfer forward from VCU, were stuck behind All Big East selections Jacob Montes and Derek Dodson early, while Riviere figured into the forward rotation but did not score until the Big East finals. However, since Montes, Dodson, and Big East Defensive Player of the Year Rio Hope-Gund turned pro at the conclusion of the regular season, the Hoyas have had a next man up mentality, and this was exemplified by these three, along with MAC Hermann Award semifinalist Dante Polvara, leading No. 8 Georgetown (10-1-2) to a 3-2 victory over Penn State (9-2-2) on Thursday.

Linhares played a career high 52 minutes off the bench, and logged assists on goals for Riviere and Ngoh in the first half. This was Ngoh’s first on the season, and first in a Hoyas uniform, while it was the third game in a row with a goal for Riviere after going scoreless to start the season. Sophomore midfielder Polvara tallied his 8th goal of the year on a first half penalty kick. Meanwhile, Penn State freshman forward Peter Mangione scored a penalty kick of his own and junior forward Daniel Bloyou tallied his 8th goal of the year for the Nittany Lions, who were coming off a 4-1 victory over UMass in the NCAA Tournament second round.

The first half was action-packed for both teams. After a Bloyou shot went off the mark, Georgetown marched right down and Riviere forced a save from sophomore goalkeeper Kris Shakes in the opening five minutes. The Hoyas then got a stroke of luck when, in the 8th minute, a Penn State defender was whistled for a handball in the box. Polvara, who missed a penalty kick in the Big East Championship game, looked cool and confident and put it past Shakes to give Georgetown an early 1-0 lead.

Four minutes later, in the 12th minute, Georgetown sophomore midfielder Will Sands was called for a foul on Bloyou in the penalty area. Mangione calmly hammered one past junior goalkeeper Giannis Nikopolidis to take advantage and knot the game at 1. Georgetown kept up the pressure after this, sending ball after ball to the box en route to 11 total shots in the first half.

In the 30th minute, junior midfielder Sean Zawadski, who has been playing on the Hoyas’ backline, brought a ball up to the attacking third and threaded a pass to Linhares. Linhares made a move past his defender and found Riviere who made two touches and sent a shot to the far post that ended in the back of the net.

In the 35th minute, Zawadski thought he had put another goal in, but was called offside. Georgetown did not let up the pressure, with reserve senior midfielder Chris Le taking two shots and forcing one Shakes save. As time ticked down in the first half, Le sent an excellent ball to Linhares down the right side. The freshman sent in a cross that made it to Ngoh’s head, pushing the lead to 3-1 with 20 seconds remaining in the half.

Penn State came out firing in the second half. Nikopolidis was able to stop a header from sophomore forward Liam Butts in the 51st minute but could do nothing to stop a Bloyou redirect of a cross from redshirt senior midfielder Pierre Reedy in the 54th minute. The Hoyas defense clamped down after this and didn’t let the Nittany Lions see another scoring chance.

Nikopolidis was hardly tested throughout the afternoon as the backline led by Zawadski and freshman defender Kenny Nielson buckled down to keep the game out of reach. Georgetown outshot Penn State 14-6 on the afternoon, with 9 balls going on target to only 4 for Penn State. Shakes was often under fire and performed admirably, making 6 big saves to keep the Nittany Lions close. Impressively, the loss was only Shakes’s second in his career and this was the first time he has given up more than two goals in a game.

The Hoyas will take on the Marshall Thundering Herd on Monday, May 10 at 1 pm EDT in the Elite Eight. Marshall upset No. 1 Clemson on Thursday on penalty kicks. Sophomore midfielder Max Schneider scored in the first half for the Thundering Herd before a Clemson goal off a corner kick tied the game. That score stuck until Marshall won it 7-6 in PKs. For the game, eight Marshall players played 110 minutes and Schneider played 108. They will have four days to recover before facing the Hoyas.

The Thundering Herd is led by junior midfielder and MAC Hermann semifinalist Vitor Dias, who has a team leading 6 goals to go with 4 assists. He is supported offensively by junior defender Jan-Erik Leinhos (4 goals and 3 assists), sophomore forward Milo Yosef (4 goals and 3 assists), and senior forward Jamil Roberts (2 goals and 5 assists). The two will face off for a chance to go to the College Cup, as Georgetown hopes to continue its title defense. For continued coverage of all Georgetown sports, follow @GUVoiceSports on Twitter. 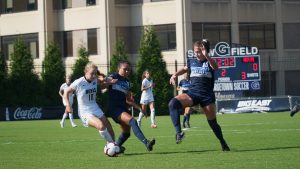