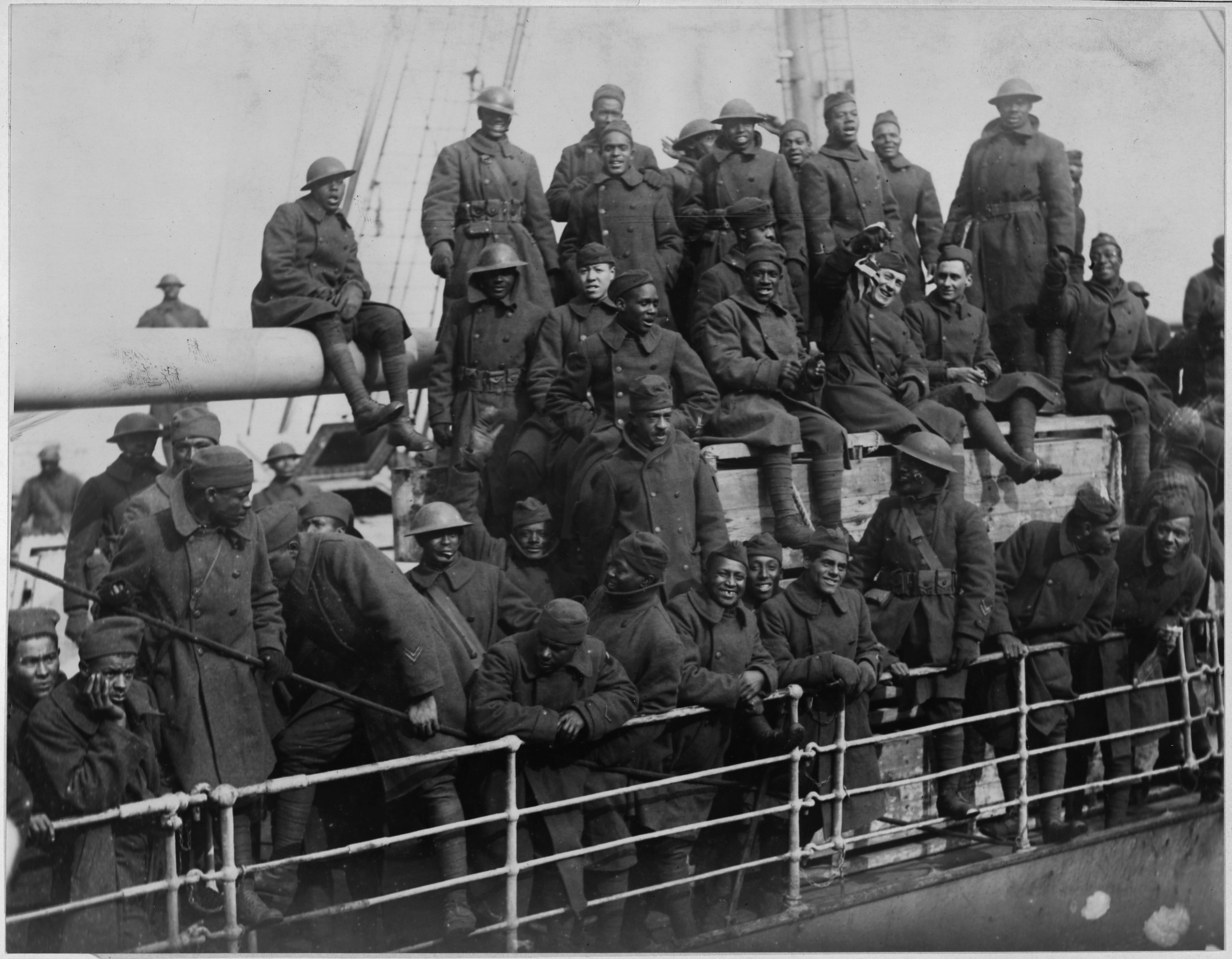 Photograph from the Records of the War Department General and Special Staffs, The National Archives and Records Administration.

World War I had ended only months before D.C.’s Black veterans found themselves returning to the front lines—only this time to defend their homes against a domestic white supremacist invasion.

A string of race massacres over the summer of 1919 was the climax of a years-long terror campaign levied against Black communities across the United States. Known collectively as the “Red Summer,” a term coined by civil rights activist and National Association for the Advancement of Colored People (NAACP) leader James Weldon Johnson, the period saw lynchings spike, Ku Klux Klan membership surge, and African American homes and businesses burn—decades of hard-fought wealth gains in Black neighborhoods razed by white rage. On July 19 just over a century ago, Black Washingtonians mobilized against one of these multi-day attacks as rioters descended upon the nation’s capital.

D.C. at the start of the twentieth century was a microcosm for Black life in America. At the time, the District’s population was approximately one-fourth African American, with over 110,000 Black residents living in mostly segregated neighborhoods. Overcoming racist structural hurdles to employment and land ownership, Washington became home to a defiantly vibrant African American middle class.

Prominent Black business districts blossomed. Shaw (known then as Uptown, an enclave bounded by Logan Circle and U Street) supported multiple restaurants and performance venues, including a then-new Howard Theater. The Whitelaw, a Black-owned, five star luxury hotel, opened just a few blocks northwest and became a symbol of snowballing economic opportunity. Beside it was Griffith Stadium, a segregated baseball stadium where, in addition to the Negro League games, the African American community hosted graduations, musical performances, and religious services. The District’s growing business and entertainment sectors, combined with more robust transportation infrastructure, transformed Washington into a flourishing cultural and financial hub for African Americans.

Amid all this development, the Industrial Savings Bank was key. Founded in 1913, it was among the first Black-owned banks in the nation and helped to finance many business ventures throughout Shaw and the broader U Street Corridor, including the Whitelaw. Beyond these projects, the Industrial Savings Bank, and many African American banks at the time, built confidence in the security of the financial system among their communities—something that had been damaged extensively after the Freedman’s Bank collapse in 1874. By lending with the bank, Shaw and other Black neighborhoods in D.C. were able to develop a stable business sector capable of generating wealth independently of an approving white authority.

The white rioters marching through the District more than a century ago met this prosperity with reactionary violence.

Before the war’s end, hundreds of African Americans had already been killed and thousands of dollars worth of their property were destroyed during massacres in Springfield, Slocum, East St. Louis and elsewhere—not to mention the thousands lynched since the failure of Reconstruction. Much of the white mob’s racial resentment was billed in explicitly economic terms: Black labor had upset the social order by moving from a strictly exploited workforce to actual competition, often breaking the strikes of labor unions who excluded them by race.

Businesses were key for Black residents’ ability to exert political power in the District, especially because of Washington’s unconventional status as a federal territory. Economic and social capital was integral to shaping Washington’s local political affairs, as residents had no suffrage whatsoever.

The District government’s structure was explicitly designed to curb the growing political power of a would-be Black electorate in Washington. Though Congress granted a home-rule charter to Washington in 1802, Black men were only allowed to vote without a literacy test beginning in 1866. Only five years afterward, Congress drastically curtailed the city’s home rule: Washingtonians could only elect a local house of delegates and a non-voting congressional representative, while the District’s governor, upper legislative chamber, and other management boards would be appointed by the president. The Organic Act of 1878 ended democracy in the District altogether, eliminating local elections and replacing the governor with three presidentially-appointed commissioners.

Shortly thereafter, powerful white business leaders in D.C. founded the Washington Board of Trade in 1889 to consolidate power and lobby the now exclusively appointment-based District government. While Black business leaders never reached parity with the functionally oligarchical control of the Board of Trade and triumvirate of commissioners, the growth of African American neighborhood economies did provide some political protection and local autonomy.

In 1919, however, white animosity boiled over, and deaths soon followed.

In that year alone, a recorded 78 African Americans were lynched and 11 were burned at the stake nationwide. The summer sparked race riots in Washington and Chicago, as well as towns in at least nineteen other states. In just one day, 237 Black sharecroppers were killed in Elaine, Arkansas; in Chicago, 23 were killed, over 500 injured, and over 1,000 left homeless from the destruction. As for Washington, historians estimate that 40 people were killed by the end of the four-day riot—the officially reported death toll only fluctuated between seven and 15, though the federal government never surveyed the final tally nor the resulting property damage.

Media outlets at the time published provocative stories characterizing Black political mobilization as a Bolshevist-inspired call for revolution—a charge which had little basis in reality, and was born out of a rapidly developing fear of communism’s arrival in the United States. In order to build domestic support for the war effort, President Woodrow Wilson’s administration empowered white vigilante groups to protect the home front and “promote patriotism”—that is, suppress dissent.

Organizations like the American Protective League, the Citizen’s Protective League, and the Bisbee Workman’s Loyalty League nominally arose to report threats and dissenters to authorities; in application, of course, these groups were state-sponsored militant organizations that sought out and attacked German sympathizers, draft resisters, socialists, and African Americans—all considered radicals.

In fact, the Justice Department under Wilson coordinated with the American Protective League, recruiting its help as a preemptive measure in the case of communist revolt. Though members stopped serving in an official capacity shortly after the war’s end, vigilante patrols and harassment continued long afterward.

Alongside these militias, newspapers in D.C. and across the country inflamed racial resentment by sensationalizing the “New Negro”—a broad term encompassing ideologies from Pan-Africanism and Black nationalism to Wilsonian democracy and race-conscious socialism. Black political movements had gained noticeable momentum at the time: NAACP membership had grown enormously from 9,200 members in January of 1919 to 62,000 members in May, then further to over 91,000 by the end of the year.

In response, reporters linked the “New Negro” with crime, stoking white residents’ fear over the NAACP’s growth and Black veterans’ desire for civil rights. One New York Times headline, published a few days after D.C.’s massacre, encapsulates how journalists wrote about the Red Summer: “Reds Try To Stir Negroes To Revolt, Widespread Propaganda on Foot Urging Them to Join I.W.W. and ‘Left-Wing’ Socialists.”

Much of this political mobilization can be credited to Black servicemembers, who saw the war as a way to promote democracy globally and secure rights at home. Around 380,000 African Americans served in the segregated United States armed forces during the war, 5,000 of whom hailed from the District. Despite repeated racist harassment from fellow service members and wage theft by their commanding officers, Black divisions performed remarkably well on the ground.

Though all returning Doughboys were met with a harsh job market, Black veterans were especially disadvantaged because the Wilson administration had segregated federal employment just before the war. Beginning with a request from his postmaster general, Wilson gave his Cabinet secretaries and commanding officers the latitude to segregate federal services they oversaw—in his words, to minimize “friction” between races.

High unemployment, combined with illicit alcohol trafficking during Prohibition, led the media to hyperfixate on crime as a way to sell papers. In a tide of racially antagonistic journalism, the District’s largest publications latched on to reports of white women claiming to be attacked by Black men. Racist, provocative headlines made the front page almost daily, labeling dubiously-detained Black suspects as “fiend[s].”

Despite conflicting details between newspapers, the stories of Bessie Gleason and Mary Saunders, two white women making such claims, sparked a thousand-strong manhunt throughout the District in early July. Groups of police officers and white vigilantes gathered and searched African American residents they suspected of being the perpetrator without warrants.

The situation soon became so inflammatory that NAACP leaders specifically reached out to editors of the Washington Post, Herald, Times, and Evening Star requesting crime coverage be toned down out of a fear that they were “sowing the seeds of a race riot by their inflammatory headlines.” Only the Star responded and complied with the request.

Days after the NAACP’s outreach, the Washington Post published a headline widely blamed for escalating the July riot beyond previous altercations. It read “Mobilization for Tonight,” and called for whites to station themselves downtown at nightfall. The white mob explicitly tried to invade and ransack the U Street Corridor in an attempt to disrupt Black-owned businesses—establishments they felt were defiling the capital’s natural racial order.

African Americans living nearby caught wind of the attack before it arrived and were able to successfully defend sections of the city against the siege. Griffith Stadium became an armory for Black veterans to equip. Shooters were stationed at Shaw’s Howard Theater, barricades were assembled near Howard University in LeDroit Park, and Black infantry lined Florida Avenue and U Street. Skirmishes broke out as around 400 white veterans clashed with different sections of the fortifications. Eventually the mob dissipated—not out of successful police or military enforcement, but rather out of exhaustion and the arrival of a heavy summer rainfall early the next morning.

President Wilson never publicly addressed what had happened beyond comments made by personal aides; he had been bed-ridden with dysentery in the previous days. In the aftermath, the NAACP pushed the Wilson administration to prosecute the Post for inciting a riot, but no charges were pursued. The organization did, however, successfully litigate to protect Black veterans who had been arrested by police for weapon possession while defending their home.

Once the dust settled, Washington’s thriving Black neighborhoods had come under siege, but survived. After rebuilding efforts, the District’s central African American enclaves continued developing into the 1920s, even as racial clashes gave Congress further political capital to escalate segregation in public spaces. The Industrial Savings Bank’s assets grew through the decade, reaching approximately 11,000 depositors before eventually collapsing during the Great Depression. U Street, meanwhile, would only grow as a cultural hub for Black Washingtonians—eventually being dubbed “Black Broadway.”

Washington was not the first Black community terrorized during this period, nor the last—days after Washington’s riot, violence erupted in Chicago, and two years afterward, the homes of 10,000 Black residents would be burned in Tulsa. Two years after that, the Black town of Rosewood, Florida would be completely destroyed by invading white supremacists. Through those terrors, though, the NAACP and neighboring Black political movements continued their progress in the fight for civil rights.

W. E. B. Du Bois, an NAACP founder, wrote of that fight earlier in the Red Summer as some of the first attacks began to accumulate. It was a call for African Americans to fight for democracy at home just as they had in Europe, pointing to both the ethical and material insufficiency of white democracy for the Black man.

“By the God of Heaven, we are cowards and jackasses if now that that war is over, we do not marshal every ounce of our brain and brawn to fight a sterner, longer, more unbending battle against the forces of hell in our own land,” Du Bois wrote. “We return. We return from fighting. We return fighting.”