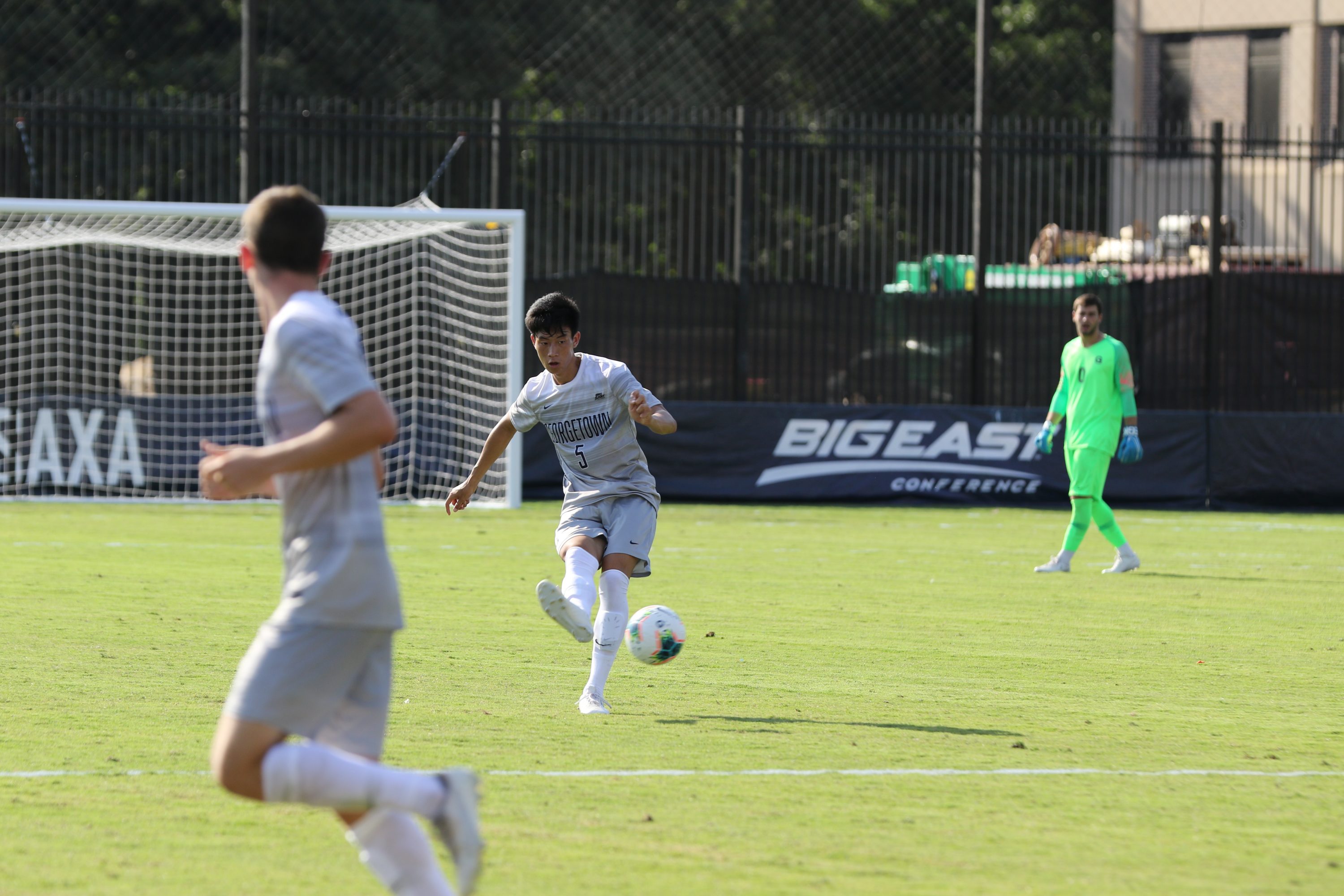 The 2020 Georgetown Hoyas men’s soccer season was different from any other, starting with the fact that it was played in the spring of 2021. Just 3 months later, the Hoyas hope to build off their 10-2-2 season, where they were mainstays at the top of the national rankings but ultimately fell in the NCAA quarterfinals to eventual national champions, Marshall. The tournament showing was an impressive one nonetheless, as they knocked off the top scoring offense in the country in High Point along with top contenders in Penn State.

This season, the Hoyas open up ranked #5 in the United Soccer Coaches Preseason Poll and are a team with high hopes. Unlike last year, the Hoyas will be able to train together much more regularly with a proper preseason for the first time since 2019. Graduate student and team captain Ethan Koehler noted that having a full preseason is “massive” for the squad as a whole, but especially for the young guys who need to learn the team’s system and tactics. In an interview with the Voice, Koehler emphasized the Hoyas’ optimism after losing household names in Derek Dodson, Jacob Montes, and Rio Hope-Gund before the NCAA tournament last year, but still had the firepower for a deep run in the midst of losing key players.

“With the exception of Paul Rothrock, this is the same team that lost to Marshall in the quarterfinals,” Koehler said.

Three-time Big East Men’s Soccer Coach of the Year Brian Wiese is looking to lead his Hoya squad to a deep tournament run in December. We’re all aware of the famous 2019 season where Wiese finally got the program its first national championship, but now the question is how do we get back there? Who is Wiese going to lean on and rely on in order to push for another dream season?

Let’s break it down by position.

The Hoyas have a relatively young squad, but senior goalie Giannis Nikopolidis provides depth and experience in goal. Nikopolidis will be a needed, calming presence in the net for the squad; his skill and composure have allowed him to make some incredible, acrobatic saves in clutch moments throughout his career. Last season, he allowed only 7 goals across 12 matches (a goals against average of only 0.62) while posting 6 shutouts on his way to being named the Big East Goalkeeper of the Year. In addition, the Hoyas have incredible goalkeeping talent in the locker room, in particular incoming freshman Luca Ulrich and the veteran Koehler. If the Hoyas are to have a shot at another title, the keepers will surely be one of the keys to a successful year.

Now what about the backline? With the departure of Hope-Gund to the professional ranks just before the NCAA tournament, we saw a now-senior midfielder Sean Zawadzki step into a center back role with efficiency. In an interview with the Voice, Zawadzki said we can expect to see him slot into that defensive role at “moments,” but that he will be much more involved in the midfield. The backline likely will be rounded out by juniors Will Sands and Aidan Rocha, sophomore center back Kenny Nielsen, and junior defender Daniel Wu, who missed all of last season due to injury.

“Having Wu back is huge for us,” Zawadzki said.

We should look for Wu and graduate student Chris Le to get involved in the rotation and possibly start for the squad throughout the season. Freshman Kieran Sargeant out of the Houston Dynamo Academy could also get considerable minutes at the fullback spot; his attacking skillset will be a great compliment to Sands in particular at the left back spot. With Wiese’s relentless attacking style, we can be sure we’ll see constant rotation during a game to keep these legs in the back fresh so the fullbacks are always joining the attack.

The midfield is going to be an area of great interest this season. If we look at the lineup from the tournament last season, we see three of four returning starting midfielders for the Hoyas. We can expect senior Joe DaLuz to wreak havoc on the left wing with his pace, dribbling ability, and ball control, while  junior team captain Dante Polvara and sophomore Chris Hegardt return to make up the same starting center midfield from the tournament. Polvara, the reigning Big East Midfielder of the Year, had eight goals and two assists last season on 17 shots on goal. Polvara is a dynamic midfielder, providing stout defensive support when needed while being a vital attacking piece for the squad. At 6’4’’ and 180 pounds, Polvara is also a dangerous and physical aerial threat, drawing special attention from opposing defenses.

Polvara says he’s not intimidated by the attention. “It’s good to be challenged, taking on more pressure opens up opportunities for the guys in the squad.”

His partner, Hegardt, burst onto the scene last season as a freshman full of energy and fire, finishing with three goals, two assists, and plenty of created chances across his 14 appearances. This year, Polvara says they’re looking for Hegardt to “take on a bit more responsibility and be more of a leader; his confidence is contagious.”

The question mark in the midfield will be the right wing; with the veteran Rothrock moving on, who will step in? During the tournament, Wiese employed a healthy rotation of now-sophomores Trevor Burns, John Franks, and Kyle Linhares; this kept the legs fresh in the midfield and on the wings for a constant high press with speed. Burns and Franks brought dangerous bursts of energy to the field when they subbed on and we could expect to see them get more minutes. I would predict Linhares, after his one goal and four assists last season, to take the lead as a starter, but I could easily see Burns and Franks in the mix for that role as well.

Last but not least, let’s take a look at the forwards to watch this season. The two starters from last season’s tournament are back: sophomore Marlon Tabora and senior Zach Riviere. With the departure of Dodson to the pros, Wiese had to move away from the “one forward” formation he employed with Dodson to a two forward attack with the veteran Riviere moving up from the midfield to take up a new role as a starting attacker and the then-freshman Tabora gaining more playing time. Whether Wiese stays with the two forward formation or not, I think Riviere will be a lock as a starter; his pace and dribbling ability alone is enough to strike fear into any defense, no matter if it comes as a forward or as an attacking midfielder. On the other hand, while Tabora will get minutes this year, there is a group of players who will be looked upon to contribute.

An attacker to keep an eye on is St. Louis transfer Stefan Stojanovic, who joins the Hoyas after a sophomore campaign that included a goal and an assist in three starts with the Billikens. “Stojanovic fits the system well and he’s really goal hungry. He’s an all around soccer player,” Zawadzki said.

Another player that I am interested to see is freshman forward Ronan Dillow who, like Stojanovic, is a 6’0’’ attacker coming in at 180 lbs. Both Stojanovic and Dillow have similar builds to Dodson and I could see them getting involved in the rotation for this spot early on.

This is a good squad. There’s serious talent at every position, and the “question mark” positions have fantastic competition which will undoubtedly make this young Hoya team better. The team captains know their roles this year are crucial with such a young squad.

“We just need to teach the young guys the system, not soccer. They’re already talented,” Koehler said. “We have a small, older leadership class, but we have a lot of experience we want to pass on to the young guys.

“We want to make sure the whole squad is going in the right direction going into the season and we want to foster the 2019 environment,” Polvara added.

The eight freshmen coming in, three of whom were mentioned above, make up a Top 20 Class of 2025 recruiting class to add talented depth and maybe even a starter to this hungry team. Defender Maximus Jennings and midfielders Joe Buck, Diego Letyaf, Blaine Mabie, and Cole Parete round out the freshmen class. They’ll have the opportunity to put together significant minutes in Wiese’s high energy, high press rotation throughout the season and I’m very excited to see their skill sets on display.

“All of the freshmen are coming in with good energy, and can make an impact at any moment. They’ve already made a great impact off the field and they’re a really hungry group,” Polvara said of the freshmen.

The Hoyas are hoping for a statement win against UC Irvine on Aug. 26.  The captains know the importance of setting the tone early on.

“The most important thing is the win because this UC Irvine team is a talented group and they gave us one of our toughest games in the 2019 season,” Polvara said. “It’ll be a big moment if we can get the win and convince everyone on the team that they’re a part of something special.”Kickoff for the season opener is scheduled for 4:00 p.m. ET at Shaw Field. Georgetown last faced UC Irvine in September 2019, beating the Anteaters 1-0 on the back of a Jacob Montes score. Live stats can be found at guhoyas.com. For continued coverage of all Georgetown sports, follow @GUVoiceSports on Twitter. 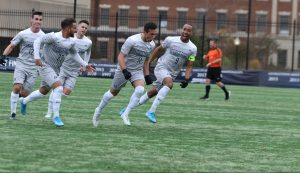 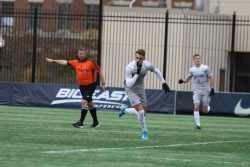