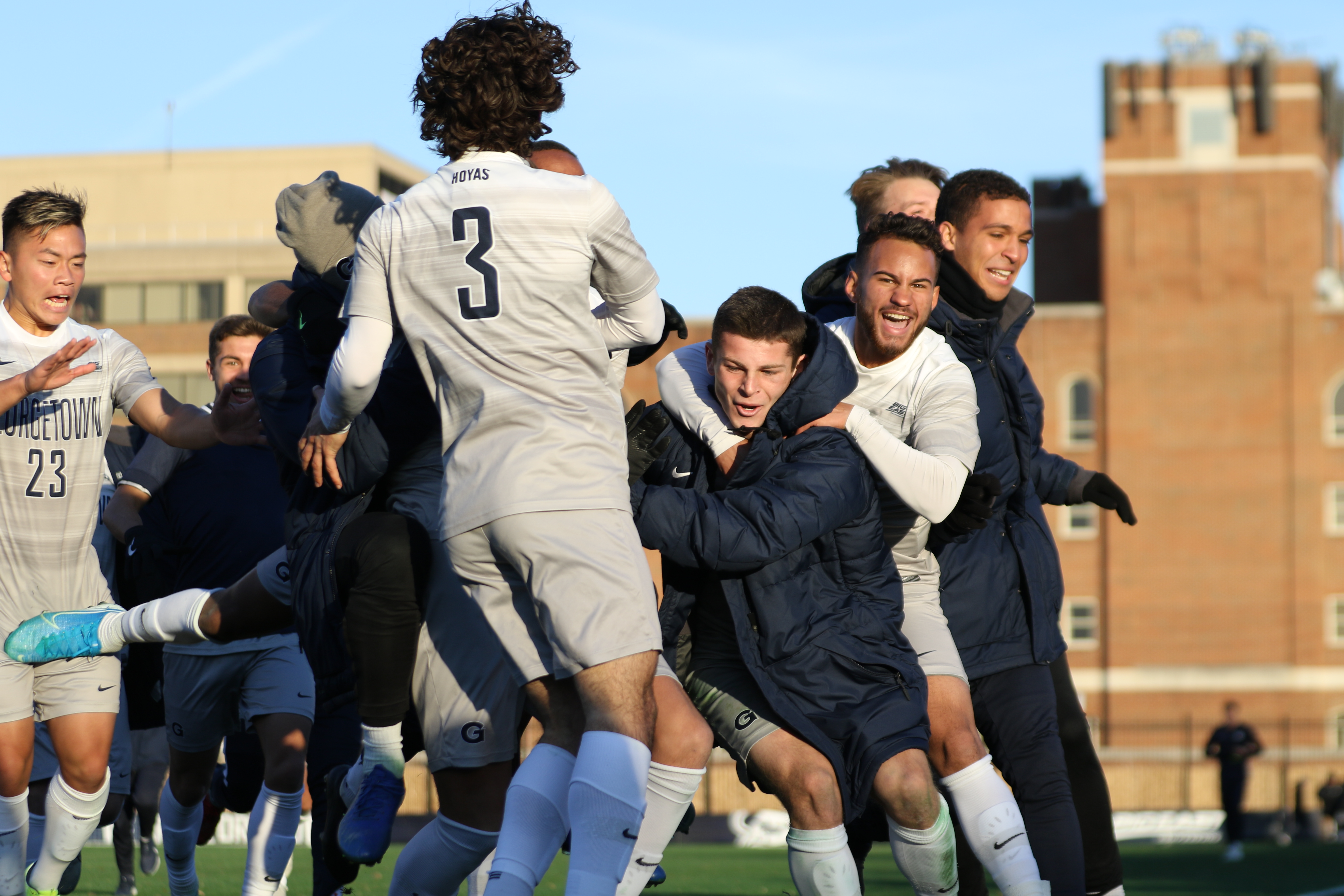 The No. 2 Georgetown men’s soccer team (12-1-0, 6-1-0 Big East) scrapped out an overtime win against the St. John’s Red Storm (8-4-2, 3-2-2 Big East) on Wednesday at Shaw Field. The game saw Hoya goals from junior forward Stefan Stojanovic, who finished a beautiful play in the second minute of the game, and junior defender Aidan Rocha, who netted the winner with 36 seconds left in the second overtime period after his shot took a deflection from a Red Storm defender.

The Hoyas came into the game trying to prove they are the team to beat in this year’s Big East competition despite their disappointing performances in the last two games. The match got off to a quick start as St. John’s senior defender Johan Aquilon had a distance shot in the first 15 seconds of the game, which was swiftly handled by graduate goalkeeper Ethan Koehler. Just one minute later, the Hoyas had their first chance of the game as senior midfielder Sean Zawadzki found sophomore midfielder Kyle Linhares in space on the right wing. Linhares managed to perfectly assist Stojanovic, who easily found the back of the net with a right-footed volley inside the box for his seventh goal of the season.

Following the breathtaking start, Georgetown kept charging at the Red Storm defense that left way too much space for the Hoyas’ creative players, like sophomore midfielder Chris Hegardt and junior midfielder Dante Polvara, to pull the strings. In the tenth minute, Hegardt tried his luck with a left-footed shot that went wide left, followed by a volley from 25 yards away just three minutes later by Stojanovic. Ten minutes later, these two collaborated again as they looked to capitalize on the counter, but the play was broken up by St. John’s senior defender Sanoussi Sangary who fouled Hegardt and earned himself a yellow card.

Despite the Hoyas’ strong start, the Red Storm began to settle into the game, creating multiple chances with Aquilon finding the space behind junior defender Will Sands to send crosses into Koehler’s box. The first shot came in the 23rd minute as Aquilon found junior defender Jared Juleau in the far post for an open shot, forcing Koehler to make a tough save. Shortly after, a similar opportunity came as Aquilon now found freshman midfielder Filip Kangeman, whose right-footed volley was too high to find the goal. The Red Storm enjoyed one more chance in the first half as junior forward Adrian Roseth sent a one-on-one straight to Koehler’s hands. Even if St. John’s did not get the equalizer, it was clear that the Hoyas would have to keep fighting to secure a win.

The second half also got off to a quick start as junior forward Leslie Legget found senior midfielder Brandon Knapp at the front post after a great play down the left side of the pitch to tie the game for the Red Storm. With this goal, St. John’s put the pressure back on the Hoyas, who responded well with three consecutive shots in the next ten minutes from Sands, senior forward Zach Riviere, and Polvara, with the last two saved by junior goalkeeper Luka Gavran. In the 63rd minute, Zawadzki enjoyed a great chance off a corner, which was blocked off the line by a St. John’s defender, forcing the referee to take a look at the video replay to make sure the ball did not cross the line. The last big chance for the Hoyas in regulation came in the 86th minute after a beautiful play by Hegardt where he threaded a perfect ball, leaving Stojanovic one-on-one with Gavran. His shot hit the crossbar and the game headed to overtime.

The first overtime period turned into a pretty cagey affair between both sides, as neither of them were able to break through until the Hoyas had a quick succession of three shots in the 98th minute, all of which were blocked by the Red Storm defense. The second overtime followed a similar path to the first, with multiple fouls being committed by both teams. In the 108th minute, St. John’s had their best opportunity to win the game as freshman forwards Micaah Garnette had a shot saved by Koehler one more time. In the last minute of play, Rocha threw it into Tabora who tried to scrape in a cross with his right-foot to find Riviere, but it was cleared by a St. John’s defender. After a series of rebounds, the ball found its way to Rocha again on the top of the box, who decided to take a final shot with 40 seconds left on the clock. The shot was deflected by a Red Storm defender, leaving Gavran no option, and found the back of the net for a Hoyas’ win that will see them strengthen their holdon the top spot in the conference standings.

Overall, a lucky but deserved win by Georgetown, who will face Xavier (8-5, 2-4 Big East) at Corcoran Field in Cincinnati, OH this Saturday at 7:00 p.m. EST. Follow @GUVoiceSports on Twitter for more updates and coverage of all fall sports at Georgetown. 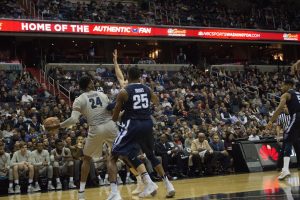 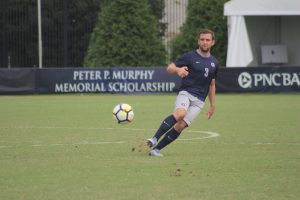 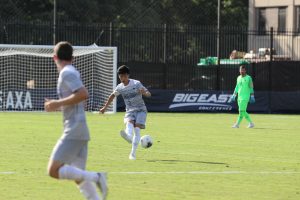