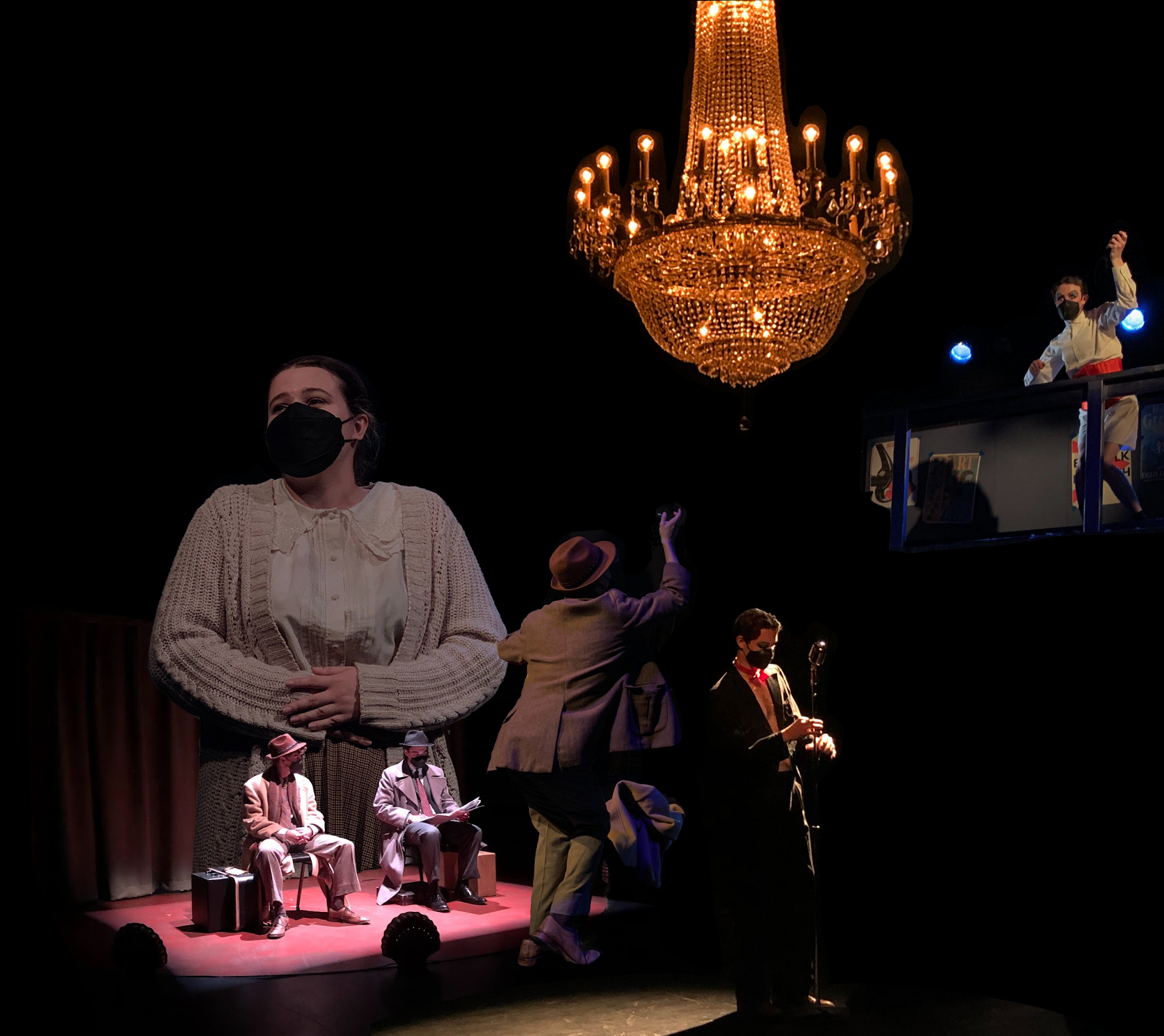 Photos by Daisy Steinthal, Design by

nomadictheatre and the Theater and Performance Studies (TPST) program have made their co-produced return to the stage with a Broadway classic, spectacular ambience, and a whole lot of glitter. Audiences who have been longing for live theater will be pleased to find Cabaret is not only full of surprises, but fully immersive as well. The line between the house and the stage is blurred in the Devine Theatre as traditional audience seating bleeds into cabaret-style tables and chairs and couches going right up to the ‘stage’, which includes a platform. Each position has a different perspective of the performance, from right in the thick of the action to a third-person view. This immersive-style seating brings a whole new meaning to up close and personal, entrancing audience members with lavish costumes and scenery despite pandemic limitations. This production is well-done overall and is particularly adept at asking new questions about an old show.

Cabaret tells the story of Cliff Bradshaw, an American wannabe-novelist in 1930s Germany, through his interaction with the performers from the Kit Kat club, a Berlin cabaret. Upon arriving in the sordid city, Cliff encounters a smuggler who tells him about the nightclub, and Cliff quickly catches the eye of the club’s star performer, Sally Bowles. From there, the two begin a complicated almost-romance where they live together and sleep together but can’t quite fall in love. The story is loosely told by the quintessential unreliable narrator, the Emcee. He steps in and out of the story, sometimes playing himself and other times playing background characters. The exhilarating and debaucherous nightclub atmosphere is offset, however, by the increasingly dangerous political atmosphere of the ’30s as the Nazis begin their rise to power.

This production was supposed to premiere a year ago but was postponed repeatedly during the national lockdown. For many months it was unclear whether the show would be in person, virtual, or if Cabaret would even go up. “For me, truly, the most exciting part about Cabaret is that we got to do Cabaret at all,” Director Matt Phillips (COL ’22) wrote in an email to the Voice. “For the larger portion of two years this project has seemed mostly like a figment of my imagination, something which I log onto Zoom meetings to talk about but don’t really believe will come to pass.”

But through the power of vaccines and masks, live theater is back at Georgetown. For safety, actors are all masked throughout the performance, so cast members learned to compensate with their eyes and bodies to convey emotion. “The regulations forced me to reimagine certain moments,” Phillips explained. “And to embrace the many, many things the eyes and body can tell us—about desire, attention, discomfort, po we r—without the aid of our lower faces,” he continued. The sensual nature of Cabaret requires lots of physicality, so the combination of heavy make up, costuming, and increased physical expression collide in spectacular harmony. This rendition of Cabaret fully explores the cast’s musical abilities. Each piece is a testament to the musicality of the actor. In particular, Sally Bowles’s (Maddie Wasson, COL ’22) numbers are stunning—her powerful vocals capture the pain and passion of John Kander’s famously heart-wrenching score. Cliff Bradshaw (Jacob Livesay COL ’23), Fraulein Schneider (Ava Foster, COL ’23), and Herr Schultz (Will Hammond, SFS ’23) (full disclosure: Hammond is a member of the Voice editorial board) all deliver tour de force  performances, capturing their characters’ rawest struggles and nuanced emotions. Fraulein Schneider practically shakes as Herr Schultz begs her with eyes and voice to not call off their engagement. Another impactful moment of impending strife comes when Herr Schultz reveals himself to be Jewish by using the Yiddish word “mazel” to wish Cliff good luck in writing his novel.

The real standout of the show is, by no surprise, the Emcee (Colum Goebelbecker, COL ’21). One simply cannot put on a successful production of Cabaret without a captivating and committed Emcee. It is the Emcee’s job to entice the audience at the beginning and send them off with heavy hearts at the close. Throughout the entire show, the Emcee brings jovial wit while still subtly alluding to the impending doom at the play’s conclusion. The fear and confusion were palpable, and the audience’s laughter was uproarious after well-delivered jokes. Though every character has to rely on their eyes and bodies to successfully act, this is particularly important for the Emcee and ensemble.

Cabaret is a classic Broadway musical, and there are several different versions that have been performed over the years, consolidated into three different scripts. Phillips chose to use the newest version to better pay homage to the source material, Goodbye to Berlin by  Christopher Isherwood, about the author’s experiences in 1930s Berlin. Cliff Bradshaw is inspired by Isherwood himself. The latest rendition most clearly portrays Cliff’s sexuality as a gay man and creates a strong bond between the Emcee and Cliff. Phillips noted that the Emcee is the liberated version of Cliff, furthering this connection in his blocking by having Cliff interact with the Emcee in a way which no other character does. At one moment, the Emcee helps Cliff up when he gets beaten up and the two stare at each other, Emcee with pity and Cliff with confusion. They mirror each other’s movements when passing by and solemnly acknowledge each other throughout the show.

Another strikingly impressive aspect of this production is how both the actors and the staging, amidst the musical’s glitz and pageantry, manage to convey the heavy tone of the show. There are several points that foreshadow Herr Schultz will be victimized by the impending Holocaust, which pull the characters and the the brewing reality. When Ernst removes his coat at Herr Schultz and Fraulein Schnider’s engagement party to reveal a Nazi armband, the silence is deafening. Such moments land in just the right way—an achievement that, though subtle, leaves the audience in deep reflection.

Cabaret is a resounding success for the TPST program and for nomadictheatre. The student-run theater group has triumphantly returned to Georgetown, bringing more than enough energy and talent for a fantastically immersive performance. The production runs Nov. 11-13, 19, and 21, and though all performances are sold out, seats may be available at the door.