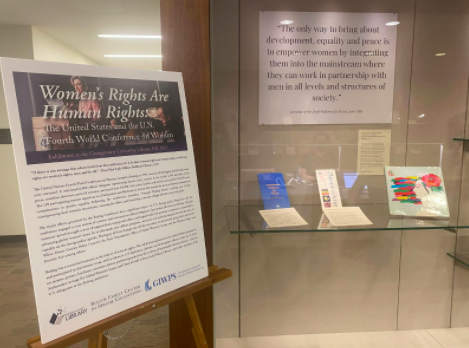 In 1995, Hillary Clinton declared “women’s rights are human rights” at the U.N. Fourth World Conference on Women. Over 25 years later, Lauinger Library has debuted an exhibition about this watershed moment in global women’s rights history.

The exhibition, titled “Women’s Rights Are Human Rights: The United States and the U.N. Fourth World Conference on Women,” will be on display from Oct. 13, 2021 through Feb. 13, 2022. Melanne Verveer, the former U.S. Ambassador-at-Large for Global Women’s Issues and chief of staff for Clinton, provided the majority of the featured archives to the university.

85 artifacts from Verveer’s time at the conference are on display at the exhibition. The library worked closely with the Georgetown Institute for Women, Peace and Security (GIWPS), which was created in 2011 by Clinton in conjunction with university President John DeGioia, in creating the display.

The exhibition was originally planned to commemorate the 25th anniversary of the conference, but it was delayed due to COVID. “This is a little bit late for that anniversary,” Rebecca Turkington, a former staff member at GIWPS, said. “But it’s still inspired by that same spirit in wanting to commemorate this event that still today really represents the high water mark for the international community’s commitment to gender equality.”

The importance of that conference could not be understated, according to Verveer, who noted the Platform for Action that was adopted by 189 nations and created a blueprint still used to measure progress for women. “It focused on critical issues including the right to be free from violence, to participate fully in the economic and political life of one’s society, and the right to education,” Verveer said of the platform.

Clinton herself will speak about her role in this historic conference in Gaston Hall on Dec. 6. “The exhibition will be a focal point during the Dec. 6 events when we anticipate many guests on campus, including many who served on the U.S. delegation to Beijing,” Verveer said.

The exclusive material included in the exhibition was hand-selected by Verveer and Turkington. Many of the documents and physical artifacts have not been officially published prior to their appearance in the exhibition, including a collection of Clinton’s luggage tags with the background and names of the different delegates who were with her on each of her trips.

“It really started with the two of us sitting in [Melanne Verveer’s] attic and going through these boxes and binders of stuff,” Turkington said. “She has really amassed an incredible archive over the years of working in this space. We just opened the boxes and started going through the papers that were in there.”

According to Turkington, there were two types of documents the team wanted to feature in the exhibition: those that explained the historical basis of the conference, and those that told the story in a visually exciting way.

“You’ll see a mix of that in the exhibit, these sort of organizational documents and then these more interesting visual factors. And we also tried to pull out documents that told a broader story,” Turkington said.

Verveer and Turkington hope that the exhibition will inspire further research into the conference as an important moment both for international feminism and for American foreign policy. After the exhibition ends, Verveer will donate the featured artifacts to the university.

“We hope that the Georgetown community will come away with a deeper understanding of the achievements of the conference, the multilateral process, and the commitments that were made by the U.S. to advance the rights of women and girls,” Verveer said. “More importantly, we hope it will inspire a new generation—the Georgetown students—to continue the unfinished business to achieve the fullness of ‘women’s rights as human rights’ whether their futures will be in the public or private sectors.”