On the corner of New Jersey Ave and O St. there is a community of residents the District plans to remove.

The pilot program, Coordinated Assistance and Resources for Encampments (CARE), is intended to protect the health and safety of residents and community members, but city council members and other advocates have heavily criticized the encampment closures for displacing those experiencing homelessness without first matching them to resources.

Encampments like the one found at New Jersey and O are groups of tents and shelters in public spaces that serve as both refuge and community for people experiencing homelessness. Prior to the cleanups, CARE is supposed to match every resident on the by-name list with appropriate resources for housing, healthcare, and other support.

While the city is supposed to give residents a few weeks of notice, multiple residents expressed confusion about the date of eviction, and signs about the upcoming eviction were not posted.

Eugene Ewing, who has lived in the Truxton Circle encampment since before September, said that while someone from Pathways to Housing, a D.C. nonprofit centered on the “housing first” model of combating homelessness, had come by to help him with his birth certificate and identification, no one from the city or CARE has interacted with him.

“I would have remembered that,” Ewing said when asked about whether the city has been doing outreach to encampment residents. After the encampment cleanup, Ewing has no plans for a new place to go.

“If I leave here? If there’s a hole in the fence, or an alley–somewhere I can find that will be dry in the morning,” Ewing said.

Jamal Thomas previously lived at the NoMa encampment at L and 2nd streets, but moved to Truxton Circle after the District cleared the tents at the NoMa underpass and replaced them with concrete barriers. Thomas testified at the joint City Council meeting on Nov. 9 to express the same anxieties as Ewing about his plans following eviction.

“It’s up to 15 or 20 people that don’t have the opportunity to get housed at that time I’m speaking for,” Thomas said. “Where are we going to go? To a bus stop crowded up laying on a blanket? Or 7-Eleven, somewhere where people can get molested or hurt?”

At the same meeting, Robert Warren of the People for Fairness Coalition, a local advocacy organization that focuses on policy solutions for homelessness, explained that encampment cleanups were often traumatic for residents. Cleanups include police presence and require residents to remove all of their belongings, or risk forcible removal. Some items may be put in storage temporarily, but items are often disposed of in garbage trucks on site.

The city holds that clearing the encampments is the most ethical and public-safety oriented solution.

“No one was evicted,” Wayne Turnage, deputy mayor for health and human services, said when asked about the recent clearing of the NoMA encampment. He explained that of the 45 residents from the NoMA encampment on the by-name list, 29 were moved into housing, 11 are currently in the process to get housing, one was rejected housing, and four refused to engage and left.

“We want to see if we can close encampments humanely by offering people housing. If we [close an encampment] by offer of housing, that is humane,” Turnage added.

Later on in his testimony, however, when citing the need for clean-ups regardless of the outcomes for residents, he also stated that this “housing first” model has issues. “The housing first model has created a moral hazard by incenting residents in shelters and other areas to migrate to the [encampments] in an effort to secure immediate housing,” Turnage said.

Jessica Cohen, who lives in the Truxton Circle neighborhood, shares similar concerns about the encampment’s growing size. Since it is situated across from a local high school, she worries the encampment poses an even greater health and safety concern than it normally would.

“Students and their parents are having to walk around this park and avoid the sidewalks,” Cohen said. “Due to safety concerns, their children are encountering the trash, rats, drugs, and residents within the park who are concerned about non-residents coming in.”

She also worried the encampment is a drain on the city’s resources. “If this encampment is not permanently closed, the number of tents in the park will continue to grow, with valuable D.C. resources, aka our tax dollars, being spent.” Cohen said.

Truxton Circle is a majority-white neighborhood, yet the majority of the encampment’s residents are Black. Homelessness in D.C. is an issue that disproportionately affects Black residents of the District. As was noted at the city council hearing, nationally, Black people are five times more likely to experience homelessness than white people, and though Black residents account for 47 percent of the District’s population, they make up 86 percent of those experiencing homelessness.

William Hargrove, a long time friend of Ewing, also pointed out the initiative’s racial bias when it comes to helping people get housing. According to Hargrove, city workers who come to help with housing often prioritize white individuals experiencing homelessness over Black or brown residents. “It’s nothing personal, but when folks do come it’s more for whites than Blacks,” he added.

While Cohen might see the encampment as a nuisance, for the encampment’s residents and others, Truxton Circle is their home, where community members care for each other.

“This is my sanctuary,” a neighborhood resident, nicknamed the Flower Lady by her neighbors, said. Dressed in a long brown overcoat and pink Adidas hat, and in between snacking on yellow Starbursts, she described how often when she has leftovers—most recently she made too many salmon cakes for dinner—she’ll bring them to the residents of New Jersey and O. After the death of two encampment residents in a tent fire on Oct. 4, she crafted memorials to honor the identities of the men who died.

“I bought little flowers and made them into bow ties; to show that he was a male,” the Flower Lady said. “That next time I went down to the Walmart to buy neckties, but they didn’t have any, so I got ’kerchiefs instead, because men use handkerchiefs.”

Similarly, Hargrove described how he comes a couple of times a week to the encampment in order to visit residents. Hargrove previously experienced homelessness and now lives in an apartment on Connecticut Ave., which he described as somewhat snooty. He found housing through the Office of Veterans Affairs because of his veteran status.

He has known many of the residents for years and expressed desperately wanting to find ways to help them get housed. “I’ll do anything to help these folks, it’s a lot of good people, I feel for them being down here, but I can’t really do nothing for them because most of them aren’t military like me,” Hargrove said, after helping a man call and check in on a mutual friend who had not returned from work.

When asked about the proposed evictions, Hargrove expressed concern that the District hasn’t been more active in trying to get residents into housing. Instead, residents have been going to Hargrove for help with housing.

“People supposed to have been coming around? That’s a load of crap,” he said.

At the recent hearing, Ward 1 Councilmember Brianne Nadeau also expressed concerns over the timeline and lack of outreach done by the city in the Truxton circle encampment.

“We’re creating an impossible situation by forcing a fix here on a timeline that doesn’t match the people we’re trying to help,” Nadeau said at the hearing.

Kate Coventry from the D.C. Fiscal Policy Institute also expressed how destroying communities such as the one in Truxton Circle can at times make it harder for unhoused people to find success.

“It’s not enough to force someone to take an apartment just because it’s free. You have to place people where they’re going to succeed instead of just pushing them into housing,” Coventry said.

Along with many advocates at the recent hearing, she touched on how homelessness disproportionately affects Black and low-income residents and how these encampment evictions expose Black residents to over-policing and criminalization.

Although the eviction has been postponed until Dec. 2 unless city policy changes, many residents like Ewing are still left without a plan following the encampment’s removal. When asked how he felt about the upcoming evictions, he said he understood how the residents of the neighborhood felt, but also clearly expressed that encampment poses no harm to anyone living in Truxton Circle.

“Sure, you got a few people doing some crazy stuff, but even they’re not really doing nothing to nobody.” Ewing said. “Nobody’s bothering nobody.” 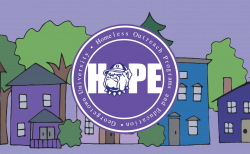