The deputy mayor of health and human services office’s planned eviction of an encampment of unhoused people at Truxton Circle went forward on Thursday morning, displacing residents and prompting further public outcry. The original deadline for clearing the encampment, Nov. 18, was pushed back to Dec. 2 after a city council meeting; this latest clearing is part of a broader schema intended to house people living in encampments, which goes by the name Coordinated Assistance and Resources for Encampments (CARE).

The pilot program faces criticism for clearing encampments before matching residents with appropriate housing and health resources, and for a lack of transparent communication between city officials and those on the street.

Robert White, at-large D.C. councilmember and candidate for mayor, visited the encampment at New Jersey Ave & O Street NW on Thursday morning when the eviction took place. “Our goal must be to make sure all D.C. residents have safe housing,” he wrote on Twitter. “Encampment clearings are inhumane and don’t help us get closer to that goal.”

Videos posted on social media depicted a high police presence and workers clearing tents with heavy machinery. People at the scene described an environment of confusion and uncertainty; residents were left in the dark about resources available to them and where they were to go next. In the weeks prior, residents at the same encampment described being left behind by city services and unsure of what they would do if faced with the planned eviction. On Thursday, those fears became reality.

As media coverage and public outrage developed, other city officials began to take action. Ward 1 councilmember Brianne Nadeau advocated for suspending encampment clearings in light of dangerous weather conditions and poor implementation. “I’ve just circulated emergency legislation to pause the clearings of encampments until at least the end of hypothermia season—separating the housing and support services element of the program from the clearings and evictions element,” she wrote.

Trayon White, Ward 8 councilmember and mayoral candidate, also took to social media to voice his discontent with the clearings. “This is a crying shame,” he wrote on Instagram. “This is kicking people that’s already down even further and it’s winter time. Come on now @mayor_bowser!”

Jesse Rabinowitz—senior manager for policy and advocacy at Miriam’s Kitchen, a D.C. organization dedicated to eliminating the housing crisis—previewed the clearing on Wednesday. “How we treat our unhoused neighbors is indicative of our priorities as a society. Tomorrow, D.C., with our tax dollars, will evict a large homeless encampment, in the winter, in a worsening pandemic, and with many residents not being offered or having received housing,” he wrote on Twitter. When Rabinowitz arrived on the scene the following morning, he documented dozens of police vehicles, heavy machinery loaders and protests against the evictions at the site.

Like some of her fellow councilmembers, who penned a letter to Bowser at the end of November demanding a halt to encampment clearings until the spring, Nadeau expressed disappointment in the disconnect between policy and the experience of residents. “Many times it is not a matter of whether encampment residents will accept housing, it is that they have been experiencing homelessness and there are real challenges that can’t be resolved before 10:30 am on a date that someone else chose,” she wrote. 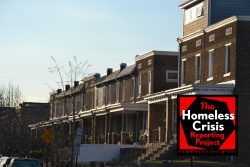