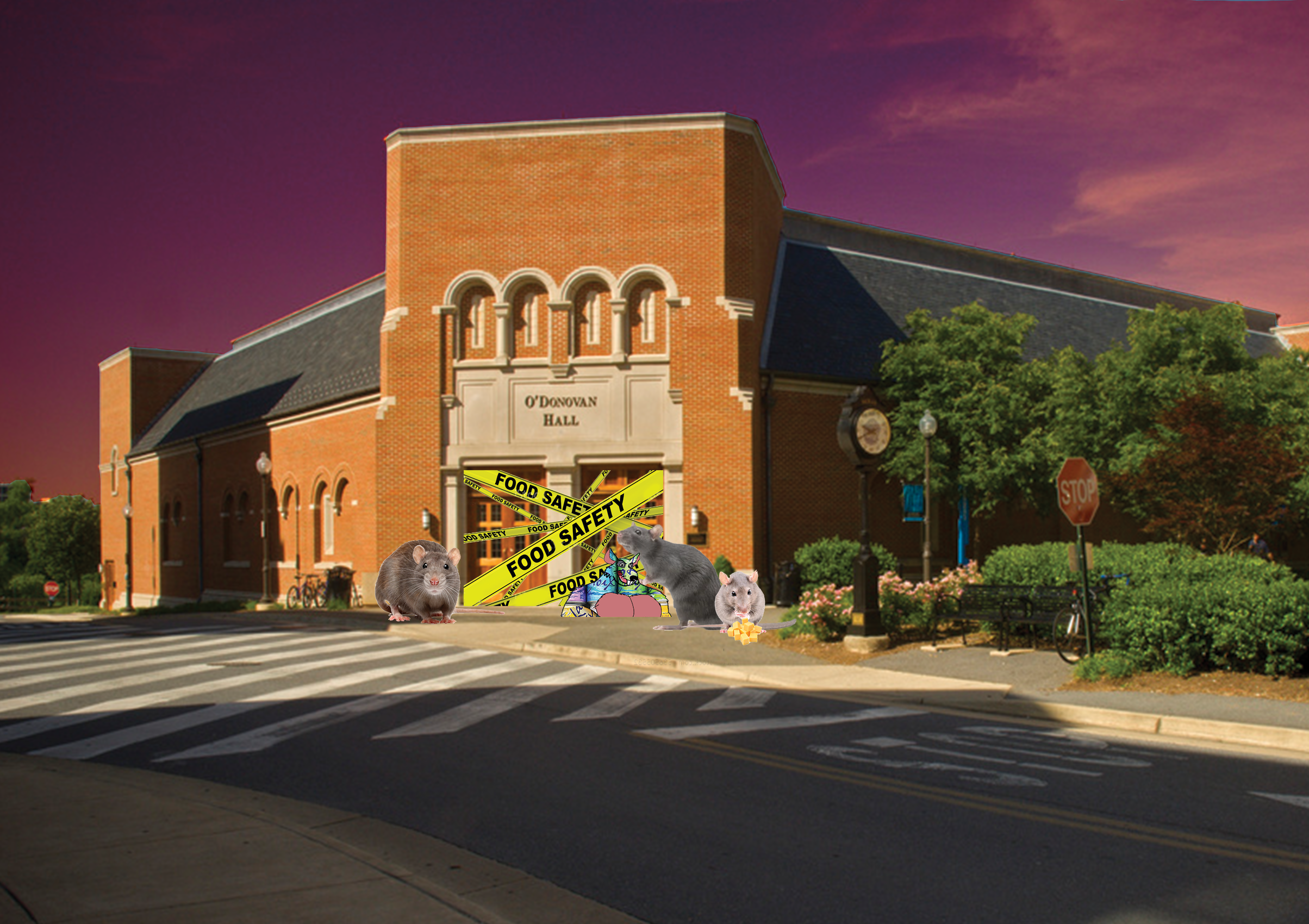 A health inspection revealed Leo O’Donovan Dining Hall is not in compliance with 10 of 56 D.C. health requirements for food service buildings, including cleanliness and food storage standards, according to a Sept. 23 report. The inspection was conducted in response to the September norovirus outbreak, although the report did not pinpoint Leo’s as the epicenter of the outbreak.

The health inspector’s report was recently released to GUSA, who informed the Voice about the failed health standards on Nov. 15, about a month and a half after the initial outbreak. It investigated a wide range of categories, including supervision, protection from contamination, and proper use of utensils.

Five of the 10 non-compliant practices were related to the temperature of the food and refrigerators. “Observed food items at the burger station and plant-based station above 41 degrees [Fahrenheit],” the report read. “There is no visible thermometer in the walk-in refrigerator.” Food items should have been stored below the 41 degree Fahrenheit threshold.

One of the violations included rat droppings behind the oven at the sweets station. Georgetown has been plagued by a large rat population for years, with the rodents becoming more aggressive since the start of the COVID-19 pandemic as they search for new food sources. Clean utensils were also dried with cloth towels when they should have been air dried, and there was food debris observed under the sushi unit at Bodega.

Back on Sept. 21, Georgetown’s chief public health officer, Dr. Ranit Mishori, sent an email to announce that approximately 12 students had reported symptoms consistent with norovirus, including stomach pains, vomiting, and diarrhea. By Sept. 27, that number had risen to 130 members of the Georgetown community, which many students attributed to the dining hall’s food.

For weeks after the illness was first disclosed, students were hesitant to get meals at Leo’s, either cooking for themselves, turning to other campus dining locations, or going to restaurants. The norovirus outbreak forced many cautious Hoyas to spend money out of pocket despite paying for the mandatory meal plan.

“Especially when we hadn’t known it was norovirus, and it was all very confusing for us, myself and everyone I know avoided Leo’s because it was kind of scary hearing of all these kids going to the E.R. and having to wait there for hours,” Claudia Byun (NHS ’25) said. “Now that the heat has died down, I know some people and myself too don’t go to Leo’s as often as we did before the norovirus outbreak happened.”

The health inspection of Leo’s gave the dining hall a risk factor of 4 out of 5, not due to the norovirus, but because food preparation is high-risk when it involves extensive handling of raw ingredients and advanced preparation requirements.

Despite the violations, a D.C. Health inspection deemed Leo’s safe to remain open even after the norovirus outbreak, information that was immediately released to the student body in September. In response to the outbreak, the university suggested limiting social gatherings, instituted a quarantine meal delivery service for those with symptoms, and increased sanitization of rooms and frequently-touched surfaces.

D.C. Health does not give a rating or grade for its inspections. It instead operates on a pass-fail system — so despite failure on 10 of the requirements, Leo’s passed the inspection overall.

The health department gave the university between five and 14 days to resolve each violation and provided recommendations for corrective actions. The report required Leo’s to acquire proper temperature-monitoring equipment for food, refrigerators, and the dishwasher machine. It received a follow-up inspection on Sept. 29 to ensure that all violations were corrected.

“Hoya Hospitality has rigorous cleaning protocols as part of its daily operations,” a university spokesperson said. “In response to COVID-19, additional cleaning measures were put into place including but not limited to increased frequency for high touch surfaces, specialized cleaning chemicals designed to protect against specific viruses, and utilization of a Clorox360 mister to sanitize all public spaces and employee locker rooms.”

A large portion of Georgetown’s student body relies on the food at Leo’s, especially since there is a requirement to live on-campus for three years, and all residential students are required to be on a meal plan. This dependency creates potential for food insecurity, as the norovirus outbreak is not the only time students have been unable to reliably access safe food at Leo’s.

Most recently, per usual university policy, the dining hall closed over Thanksgiving break, meaning students staying on-campus for break had limited access to food. “The eating that I would normally do is not possible with Leo’s being closed,” Ava Uditsky (COL ’25) said. Of those remaining on-campus, many are lower-income and international students who cannot return home for Thanksgiving due to economic and logistical constraints, making closing an equity issue.

For first- and second-year students, the lack of communication over closed food options so close to break felt especially frustrating. Byun said it is important to give workers a break the same way students and faculty are given one, but the way Georgetown handled the situation exacerbated student food insecurity. “We all were in agreement that, of course, the workers deserve a break as well, but it also felt like the students were left to fend for themselves,” Byun said.

This late in the semester, many students on the meal plan—Uditsky and Byun included—do not have many flex dollars left on their GoCard, limiting their ability to pay for meals at Epicurean and Company, the only food location open over the entire Thanksgiving break.

There were a few meals available throughout the week, including a grab-and-go Thanksgiving dinner on Wednesday and Thursday and a dinner offered by the Corp at its Hilltoss location on Friday. The Hoya Hub, a pantry located in Leavey 418, was also stocked and open throughout the break.

Georgetown Mutual Aid tried to offer students remaining on campus a chance to request financial aid to buy necessities. However, since Georgetown Mutual Aid is reliant on an inconsistent flow of community donations, it was unable to fulfill all the requests it received. Byun received a grocery grant from the Georgetown Scholars Program that gave her the chance to pay for groceries.

Moving forward, students like Byun hope the university prioritizes food security during breaks and food preparation practices. “I felt abandoned, not in a severe way,” Byun said. “But I felt like definitely not the workers, but someone in admin, didn’t give students a lot of information.”

A Fourteen Hour Journey Inside O’Donovan’s