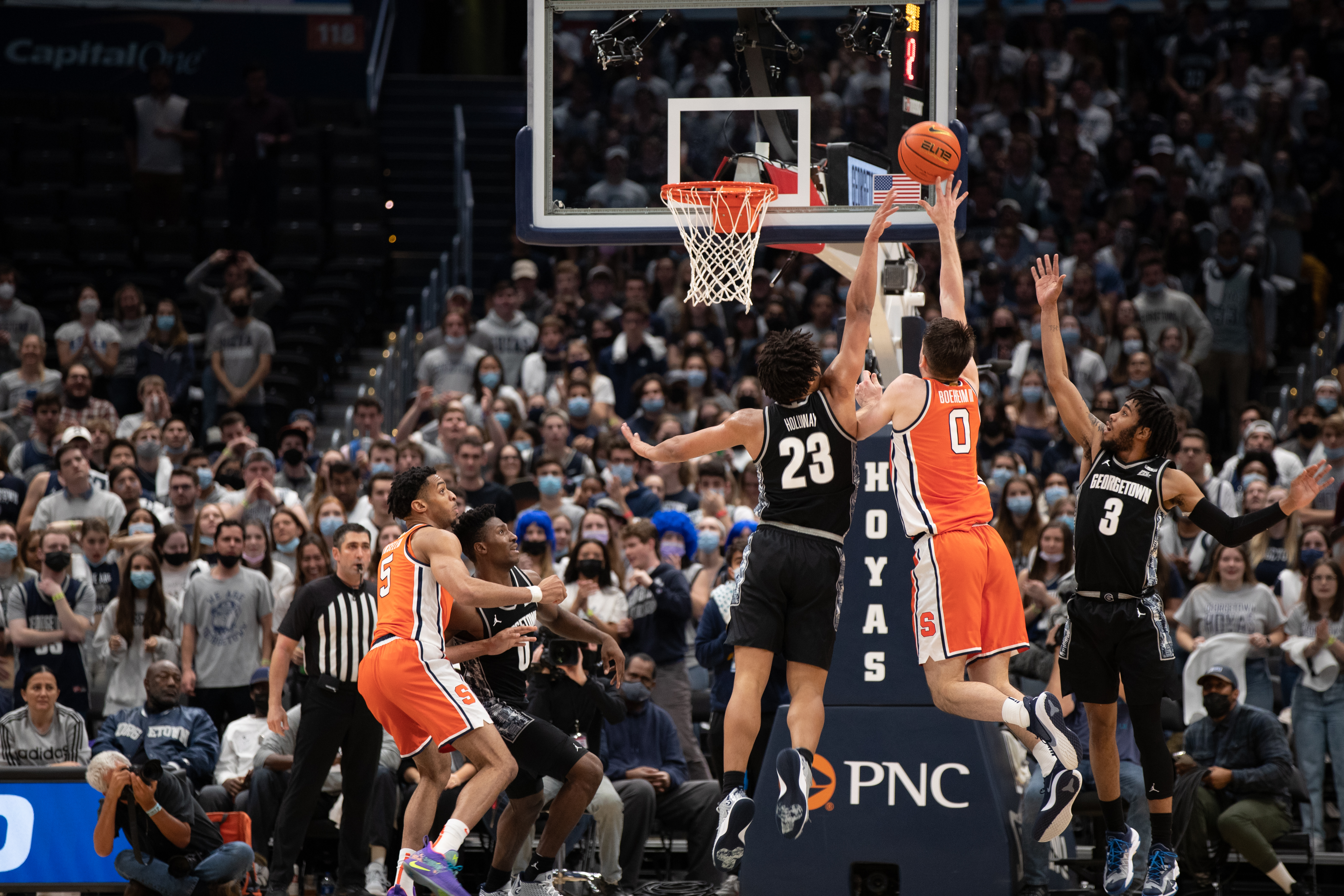 Syracuse had a strong start, winning the opening tip and jumping out to an early 4-0 lead off of layups from Boeheim and junior center Jesse Edwards. Georgetown answered quickly, getting on the board with a Malcolm Wilson dunk off of a clinical feed from Carey. Graduate guard Kaiden Rice followed up with three-pointers on Georgetown’s subsequent three possessions. A four-point play by Carey and an impressive layup from Mohammed gave the Hoyas a 16-12 lead going into the first media timeout. 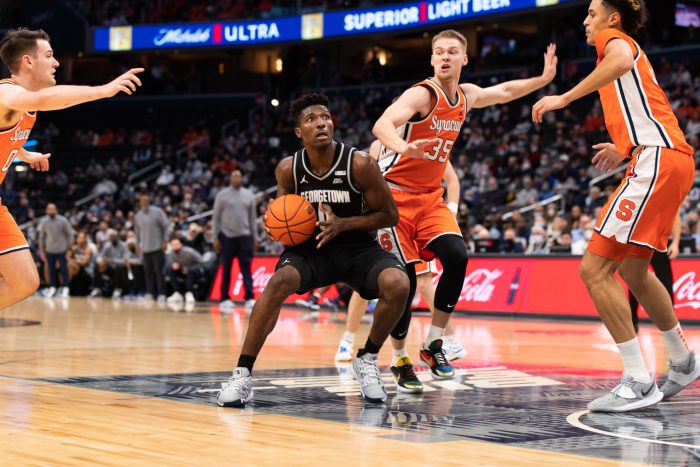 Coming out of the timeout, the Orange answered, going on a 9-0 scoring run to take the lead at 21-16. After the second media timeout, the Hoyas fought back, forcing two turnovers and getting another three from Carey. Syracuse played strong defense, stopping a fast break by Mohammed, but was unable to convert on a subsequent play, with graduate forward Jimmy Boeheim air balling a three. The Hoyas answered again, with an and-one dunk from Mohammed to bring the Hoyas within four. Through the remainder of the second half, the Orange put on an offensive show, jumping out to a 44-34 lead at the half. The Hoyas did a good job of guarding the perimeter but were stymied in the paint, giving up a total of 22 points in the paint in the first half.

The Hoyas came out of the halftime break with a drive to regain the lead. Mohammed was particularly impressive, draining a three-pointer and a series of contested layups to bring the Hoyas within two points with 14:17 to go in the half. On the next play, sophomore forward Collin Holloway drew a charge against Syracuse’s senior forward Cole Swider, giving Georgetown possession. Mohammed was fouled on a layup attempt and calmly drained both free throws, tying the game at 51-51.

On the next play, the Hoyas forced a shot clock violation against Syracuse. Longtime Head Coach Jim Boeheim called a timeout as the raucous crowd at Capital One Arena erupted. NBA Hall of Famer Dikembe Mutombo (COL ‘91) got into the action too, doing his best to hype up the student section from a courtside seat near the Georgetown hoop. 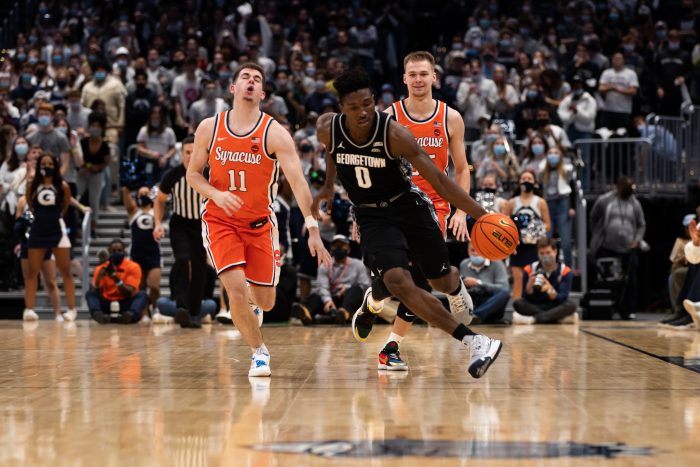 The game was touch and go from there, with both teams trading buckets in a tenuous holding pattern. The Hoyas extended their lead to as much as five points, but Syracuse refused to give in, fighting back to take a 69-68 lead with 3:14 to go. As the clock wound down, the teams traded two-point attempts with neither taking an advantage.

The turning point came late in the game. With Syracuse leading 73-72, Rice became the difference-maker, turning the game in favor of the Hoyas in making his fifth three-pointer of the afternoon to give Georgetown a two-point advantage. Swider missed his three-point attempt on the next play, allowing Georgetown to burn the clock until an intentional foul sent Carey to the line with just 16 seconds left to play. Carey made both free throw attempts, putting the Hoyas up, 77-73.

The Orange came back up the court and Girard III made a layup through a foul, giving Syracuse a chance to cut the lead to one point. As Girard stepped up to the line, the student section behind the basket was a sea of waving towels and homemade fatheads featuring a range of faces from comedian John Mulaney (COL ‘04) to NBA legend Michael Jordan. The fatheads did their job- Girard missed the free throw, giving Georgetown possession with a 77-75 lead and just ten seconds left to play. After an intentional foul, a pair of free throws from Mohammed brought the game to its final score of 79-75.

Overall, the game was a major breakthrough for the Hoyas after their early-season struggles. Mohammed in particular continued his pattern of strong play, dominating on both ends of the floor and leading the team through crucial stretches in the second half. Harris also provided a strong contribution, with seven points, six assists, and seven rebounds. Harris also provided lockdown defense on Syracuse’s Girard III, limiting the talented guard to a single field goal in the entire second half. Carey notched 17 points for the Hoyas, while Rice scored 15 points off of five three-pointers. 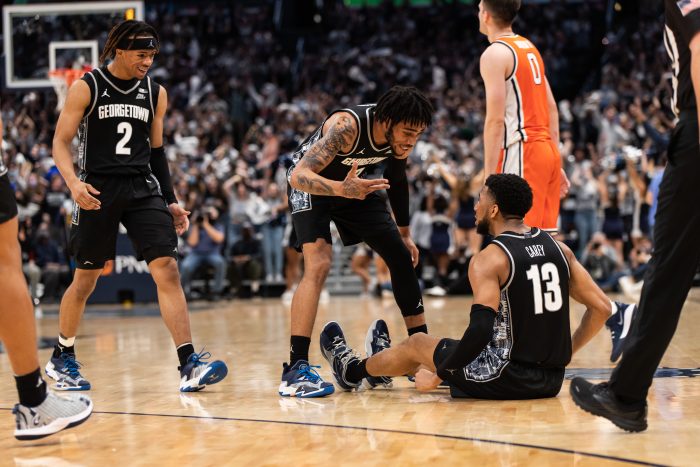 The Hoyas’ depth was also a key factor in the game. Georgetown had 14 points off of the bench compared to Syracuse’s nine. When Harris exited the game briefly in the second half with an ankle injury, freshman guard Tyler Beard came off of the bench and delivered a strong performance to keep the Hoyas in the game. Ewing commented on the roster’s depth in a postgame interview, discussing how the team worked through challenges individual players faced, concluding that “We are going to use all different types of lineup to be successful.”

Ewing also discussed the impact of the win going into conference play. “It’s not the end of the non-conference schedule. We still have two games to play. But to beat Syracuse means a lot,” he remarked.  “It’s a great win. Hopefully we can build on it and continue to improve. All these games that we’ve played so far are all to get us ready for what’s coming up — the Big East schedule.”

Statistics aside, there’s a certain joy to beating an old rival that made today’s game special. A smiling Ewing obviously felt that joy through his press conference. The players on the court felt it as they celebrated the comeback win after the buzzer. And the ecstatic crowd of Georgetown fans felt it as they spilled out of Capital One Arena and celebrated the Hoyas’ first win against the Orange since 2019. Back in the press room, Ewing summed it up best in a single sentence,  “It’s great to beat Syracuse.” 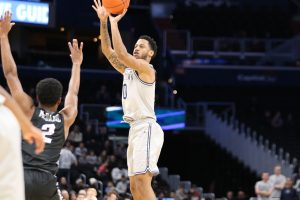