By Margaret Hartigan and Nora Scully

During the presidential and vice presidential debates hosted on Feb. 7 and 8, the two official campaigns, Leonard/Khan and Wolfe/Ume-Ukeje, discussed topics ranging from mental health and CAPS to various allegations against both groups. Write-in candidates Marcella Wiggan (COL ’23) and Otice Carder (COL ’23), meanwhile, were denied an official place in the debate due to their late registration and struggled to keep up with the questions posed by the Election Commission and students in the chat.

The vice presidential debate took place on Feb. 7 at 8:30 p.m. over Zoom. The debate began with brief introductions from both Sen. Nirvana Khan (SFS ’24) and Zeke Ume-Ukeje (COL ’24). Khan emphasized her leadership positions in numerous on-campus organizations and consistent involvement with GUSA since fall 2020, while Ume-Ukeje discussed his ticket’s ability to reach a broader constituency as GUSA newcomers.

These introductions would go on to characterize the remainder of the debate.

“I don’t come from the GUSA pipeline,” Ume-Ukeje said. “I’m just part of a campaign that has some big ideas, some big desires.”

Throughout the debate, the topic of reaching out to communities on campus was discussed heavily. Ume-Ukeje mentioned plans to offer cabinet positions to members of underrepresented groups—including the Native American Student Council and GU Pride. Khan noted that she and Leonard had reached out to underrepresented groups in their time at GUSA and emphasized the importance of listening to groups to find out what they need.

A few additional ideas were mentioned, such as Khan’s proposal to collaborate with the first-year “What’s a Hoya” housing points program to create a module on sustainable living. Ume-Ukeje suggested opening up a dialogue with Hoya parents to discuss safety, food quality, and mental health.

Much of the debate, though, consisted of defending against accusations and controversies. GUSA’s election commission had imposed penalties against the Wolfe/Ume-Ukeje campaign for a controversy involving alcohol and a campaign advertisement at a D.C. 21-and-over club, Abigail. As a result, the ticket was given reduced speaking time for both debates. An audience member pointed out accusations of Khan sending GUSA correspondences using another senator’s email signature.

“We’re all human. We all do make mistakes. I think the most important thing is that you apologize sincerely,” Khan said. “You learn from those mistakes.”

One day later, the presidential candidates met on Zoom to highlight their platforms. Both candidates initially discussed the importance of improving communication between GUSA and the student body, one of the motivations for the Wolfe/Ume-Ukeje ticket running.

“We felt like GUSA was sort of out of connect with a large portion of the student body,” Kole Wolfe (SFS ’24) said.

As the debate continued, Thomas Leonard (COL ’23) highlighted his and his running mate’s understanding of the nuances of existing programs and desire to continue the work of the current administration. Leonard, who served as a student representative on the Board of Trustees for SUNY Rockland Community College and currently serves as GUSA vice president, contrasted his experience in student body government with newcomers Wolfe/Ume-Ukeje.

“This is how Nirvana and I set ourselves apart,” Leonard said, “We know how GUSA operates.”

The disparity between the two candidates’ experience was exemplified by their answers to questions on GUSA advocacy, and students in the chat criticized Wolfe’s apparent lack of familiarity with current GUSA policy.

In contrast, the write-in “MO campaign,” of Marcella and Otice, who prefer the use of their first names, acknowledged their lack of experience and mentioned the numerous student organizations they’ve reached out to. According to the chat, their campaign outreach includes MOSAIC, MEChA, GUWOC, AASA, SAS and other clubs led by and for people of color.

When it came to policy differences, Leonard emphasized his and other senators’ current work to reduce food waste at Leo J. O’Donovan dining hall, advocacy for a student representative on Georgetown’s board of directors, and expanding the funding of CAPS. He also noted that the Leonard/Khan budget would allocate money towards large-scale fundraising for mutual aid efforts.

Wolfe focused on the relaxation of mask-wearing mandates and expanding funding for the Center for Social Justice (CSJ). “We played Villanova but can’t eat in the dining hall,” Wolfe said. “In-person events should be able to be resumed at full capacity.” As of Feb. 7, in-person dining has resumed at on-campus locations.

In the chat, the MO campaign attempted to match the other candidates’ speed in answering questions, and pointed out that questions were not being sent in the chat, preventing their ability to respond and limiting the debate’s accessibility. Khan noted that the campaign had failed to register in time and was subsequently denied a place in the debates, to which MO highlighted the exclusionary nature of petition deadlines.

“That petition process was not well publicized by any means,” MO wrote. “I think [students] also fail to recognize the additional responsibilities that tend to fall on the shoulders of marginalized communities when they have to advocate for themselves against the possibility of being harmed by what has been proposed and said.”

Both debates were disturbed numerous times by attendees who meowed, barked and sent vulgar messages in the chat. Some of those attendees were expelled from the meeting.

The Senate convened in an emergency meeting on Feb. 9 to debate extending the petition period to allow the MO campaign to join the official ballot. The vote failed without a two-thirds majority. 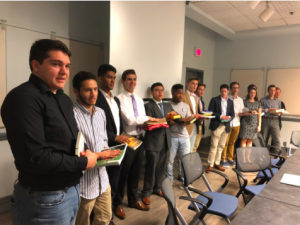