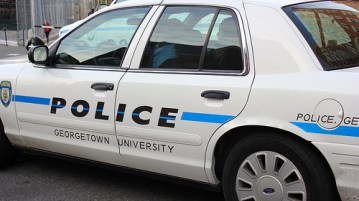 The GUSA Senate confirmed three students as representatives to the GUPD Oversight Student Advisory Committee at their meeting on Dec. 6.

The Senate established the oversight committee via a resolution at their Nov. 8 meeting. The resolution calls for the committee to have eight members, a majority of whom would be selected as representatives from student organizations the Senate believes have the greatest stake in overseeing GUPD on campus.

The committee will be chaired by a representative from Georgetown United Against Police Aggression, a student-run organization dedicated to responding to incidents of police violence and bias on campus, with the vice-chair appointed from the Senate. The GUSA executive can appoint two members, one of whom must be from the Sexual Assault and Student Safety Policy Coalition. The remaining four members will be from the student body, with the Black Leadership Forum (BLF), the Latinx Leadership Forum, and the Asian-Pacific Islander Leadership Forum each appointing one representative and the fourth representative being appointed by the other committee members from the student body.

Three of eight total members of the board were confirmed at the meeting. The first was Lily Tom (COL ’24), who was the non-Sexual Assault and Student Safety Coalition GUSA executive appointee. Tom is one of the first-year representatives to the GUSA cabinet and said she wants to prioritize the inclusion of student voices. “I’m going to be here to just make sure that the voices of all the students are heard,” she said at the meeting.

The second appointee was Abdulrahman Gabriel (COL ’22) as the BLF representative. Gabriel, a co-facilitator of the BLF, said he would work to implement the BLF’s mission through his work on the oversight committee. “I will be taking on the representative position to ensure the safety of Black students on campus,” Gabriel said.

The final appointee was Speaker Leo Teixeira (COL ’21) as the representative from the Senate. Teixeira, who wrote the original legislation establishing the oversight board, said he was excited for the committee to begin its work. “I look forward to being able to utilize all the Senate’s resources and platform to support this committee,” he said.

Teixeira also said the remaining members would likely be confirmed at the Senate’s next meeting on Dec. 21. The meeting time has yet to be determined.